The rejection by Kellogg workers of a tentative agreement, which means they’ll continue the strike they began in early October, demands a response by the entire working class. It’s time to show what solidarity really means. 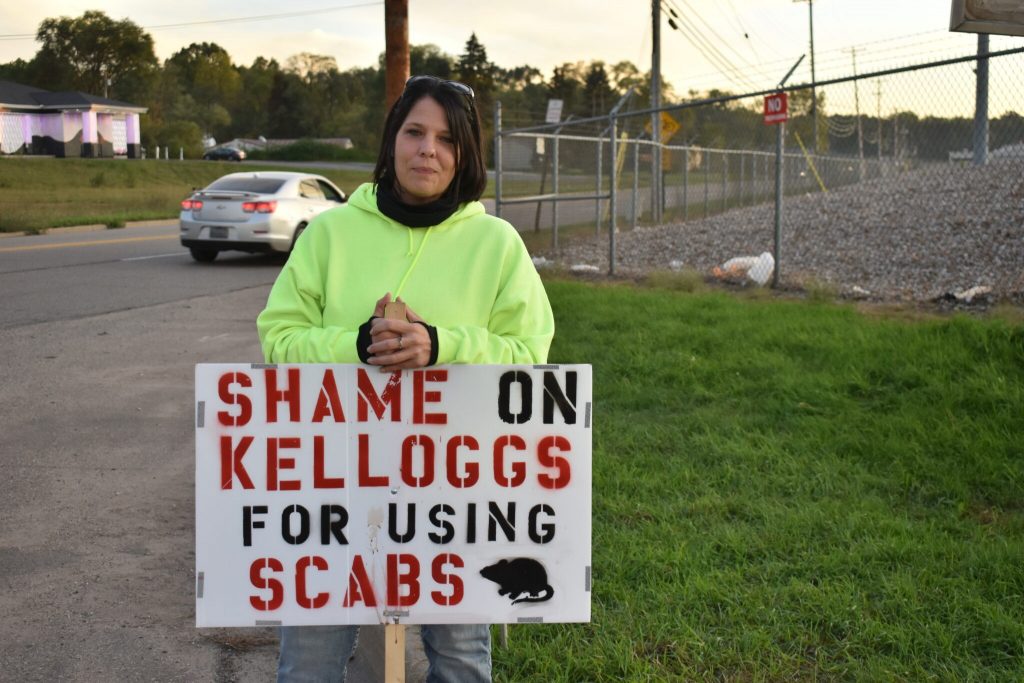 As reported yesterday, workers at Kellogg Company — who have been on strike since early October at four plants across the United States — overwhelmingly rejected a tentative agreement (TA) the union leadership made with the bosses. After nine weeks on the picket lines, these brave workers have decided to stay on strike despite all of the hardships that implies — including reduced pay as they rely on the strike fund and the uncertainty about their futures. The offer from the company failed to meet their top demand, which is grounded in the solidarity so essential to winning a strike.

That demand: eliminate the two-tier wage structure that exploits workers with the least seniority, who are doing the same jobs as veteran workers but taking home far less pay and get lesser benefits. That structure was negotiated and agreed to by the union leadership in the previous contract, back in 2015. While that contract was ratified, the huge profits Kellogg’s has been making has made it clear to the rank and file that two-tier wages can no longer be abided.

Current bottom-tier workers account for as much as 30 percent of the workforce at the plants. The company’s offer was to move bottom-tier workers who have been at Kellogg for at least four years up to the higher tier over an extended period, thus perpetuating the extra-exploitative system.

Again, the bureaucrats at the highest levels of the Bakery, Confectionery, Tobacco Workers and Grain Millers International Union (BCTGM) that represents Kellogg’s workers accepted a tentative agreement that betrayed the interests of rank and file members who have put abolishing the two tiers at the center of their struggle. The rejection of the TA is a refusal to accept what would ultimately have been a concession contract.

Dan Osborn, president of the union local in Omaha, told the Associated Press that the bosses’ offer would move workers up to the higher pay level far too slowly, and that some newer workers might have to wait as many as nine years to reach the legacy pay level. The proposed contract set a cap of 3 percent of a plant’s total headcount that could move up each year.

“Ultimately,” Osborn said, “we don’t want to leave anyone behind. And we want a secure future.”

Two-tier structures not only keep wages low for many workers, but the capitalists use them to help drive a wedge between the ranks of the unions that represent their workers.

The company’s response to the rejection of the TA came as no surprise: a swift declaration that it would expand its use of scab labor. Temporary replacements have already been working at cereal plants on strike in Michigan, Nebraska, Pennsylvania, and Tennessee. Now Kellogg’s intends to hire permanent replacements.

Chris Hood, president of Kellogg North America, justified the move. “We must take the necessary steps to ensure business continuity. We have an obligation to our customers and consumers to continue to provide the cereals they know and love.”

“Interest in the [permanent replacement] roles has been strong at all four plants, as expected,” Reuters reported company spokesperson Kris Bahner saying. “We expect some of the new hires to start with the company very soon.

In a statement released by the BCTGM, International president Anthony Shelton declared, “The members have spoken. The strike continues. The International Union will continue to provide full support to our striking Kellogg’s members.”

Shelton also said, “The BCTGM is grateful for the outpouring of fraternal support we received from across the labor movement for our striking members at Kellogg’s. Solidarity is critical to this fight.”

That’s absolutely correct, but the solidarity we’ve seen thus far doesn’t come close to what it’s going to take to see this strike through to the end with a full victory for the workers. Several things have to happen.

One is that the full power of the labor movement, including financial, needs to be deployed in support of the Kellogg strike. It means making the Kellogg’s everyone’s strike, and employing resources from other union Internationals, and the AFL-CIO itself, in service of winning the strike. This is not only a good investment in winning the BCTGM members’ particular struggle, but a victory at Kellogg will strike a strong blow against the two-tier wage structures that exist across the United States.

Another is that the organized labor movement, along with unorganized workers and community members where the Kellogg plants are located, need to deploy bodies to keep the scabs out. If the history of workers’ struggles against the bosses has demonstrated one thing clearly, it is that shutting down production is the key to winning strikes. As long as the capitalists can keep churning out their products, they are winning. That’s exactly why Kellogg is turning to permanent replacements — scab labor.

Capitalism keeps an “industrial reserve army” of unemployed people available to become these scabs (as Karl Marx explained in Capital). That’s why there’s never “full employment” in this country; having unemployed people allows for the bosses to “recruit” this “surplus population.” And the more marginalized the unemployed become, the more likely they are to be recruitable as scabs when employed workers strike.

Todd Vachon, who directs the Labor Education Action Research Network at Rutgers University in New Jersey, told the Associated Press that “he’s not sure the company will be able to hire enough workers to replace the ones who are out on strike in the current economy, and Kellogg’s may have a hard time finding people willing to cross a picket line.”

But we can’t let the Kellogg workers rely on the “current economy” — with a tight labor market and a near record number of job openings — to keep the company from bringing in scabs. The labor movement and all of its allies need to put bodies in their path at the plant gates in Battle Creek, Lancaster, Memphis, and Omaha. And we need to make sure other unions don’t cross those lines, too. It’s not just temporary and permanent replacement workers who are scabs. Truckers — including unionized truckers — who go in and out of those plants are functioning as scabs, too.

Accomplishing that means that rank-and-file unionists are going to have to expand their struggle against the bosses to include confronting the union leaders. For all the words of support in the statement issued from the International yesterday, the fact remains that the BCTGM at the highest levels has not mobilized the entire union to keep scabs out. It hasn’t built solidarity actions or agitated for solidarity strikes. It hasn’t demanded that its union confederation, the AFL-CIO, come to the direct aid of Kellogg workers with everything it’s got, which amounts to quite a bit of worker power.

Mobilizing other unionists, unorganized workers, and community allies is going to require self-organizing, which cannot be accomplished by relying on the bureaucrats and or on any of the politicians from the capitalist parties who have jumped on the “support the Kellogg workers” bandwagon for what they see as political gain.

This is a very important moment for the U.S. labor movement and the notion of solidarity. The Kellogg workers have taken a heroic step. It’s not easy to maintain a strike for as long as they have already, and even more difficult to keep going. While they receive strike benefits from the International union, it is not their full pay, and many have had to resort to finding temporary jobs to supplement those payments.

The Kellogg workers are sending a clear message to the bosses: give us what we demand. With their rejection of the TA, they’re also sending a message to the rest of the working class. Let’s pay attention and get moving!