No Charges for Kenosha Cops Who Shot Jacob Blake

The cop who shot Jacob Blake will face no charges for paralyzing him with seven bullets in the back. The shooting touched off the Kenosha protests in which Kyle Rittenhouse murdered two protesters. 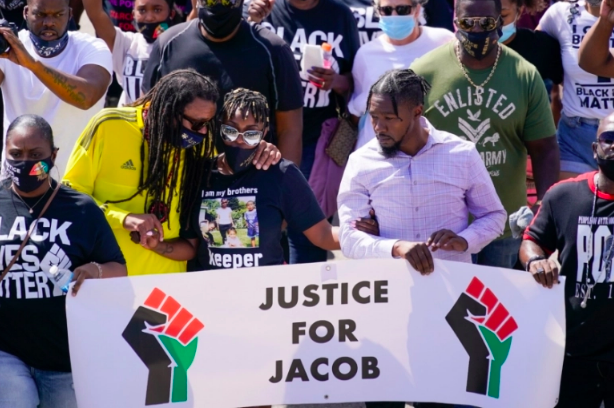 Seven bullets in Jacob Blake’s back, shot at close range. Seven bullets as he walked away from the Kenosha, Wisconsin cop who fired on him while answering a domestic disturbance call. Blake is now paralyzed from the waist down.

This afternoon, Michael Gravely, the Kenosha County District Attorney, announced that no charges would be filed against the shooter, Office Rusten Sheskey, or Officers Brittany Meronek and Vincent Arenas, both present at the time. Playing his role as part of the injustice system that protects cops, Gravely claimed they would have too strong a case in court for “self-defense.”

“If you don’t believe you can prove beyond a reasonable doubt, you have an ethical obligation not to issue charges,” he told reporters at a press conference.

It was a Sunday evening in late August of last year when the cops shot Jacob Blake. A bystander caught the confrontation; Kenosha cops don’t wear body cameras. Blake was walking to an SUV and was about to get in on the driver’s side when Sheskey opened fire. Both cops also used their tasers. Later, state prosecutors claimed Blake was near a knife — but Raysean White, who shot the video, said he heard the police yell to Blake to “drop the knife” but never saw him armed with it.

Just as the knife later found in Blake’s car was an excuse for shooting a Black man, so too is the fact that Blake has not been charged with a crime related to the shooting is being used to excuse letting the cops off. It’s the proverbial “wash.” No harm, no foul — except that another Black man has been victimized by racist cops who will now go back to terrorizing the people of Kenosha.

The shooting of Jacob Blake set off days of protests in Kenosha. It was during those protests on August 25 that Kyle Rittenhouse, a teenager from nearby Antioch, Illinois, shot and killed Joseph Rosenbaum and Anthony Huber, two protesters, and seriously wounded another. He has since been charged with felony homicide and other crimes and released on bail.

Like the excuse given by the Kenosha district attorney for letting the cops off, Rittenhouse has claimed he was acting in self-defense. His story: he was there to help “protect” local businesses from vandalism.

Who protected Rittenhouse? Video shows him shooting his victims and then being waved on past the police lines by Kenosha cops. It’s difficult to imagine that Sheskey and Arenas weren’t front and center, targeting protesters and making sure Rittenhouse could get away.

After Gravely’s announcement, the Blake family’s lawyer declared that the decision not to charge the cops “failed not only Jacob and his family, but the community that protested and demanded justice.”

And it failed us, too — every one of us who demands an end to the terrorist, murderous sprees of cops across this country who target people of color and time after time get away with it.

“Even before announcing his findings,” NBC News reported, “Gravely pleaded for peace.”

No peace without justice. Let’s avenge the Jacob Blake shooting by returning to the streets until every police department in this racist country is abolished, along with the capitalist system the cops protect.