NYC Teachers Must Strike Against Reopening

Mayor de Blasio’s shoddy reopening plan for NYC schools — an attempt to reboot the economy at the expense of working-class families — reflects a total lack of concern for safety that will risk the lives of school staff, children, and the families of anyone who enters a school building. City teachers are discussing and planning for a strike to force remote instruction. 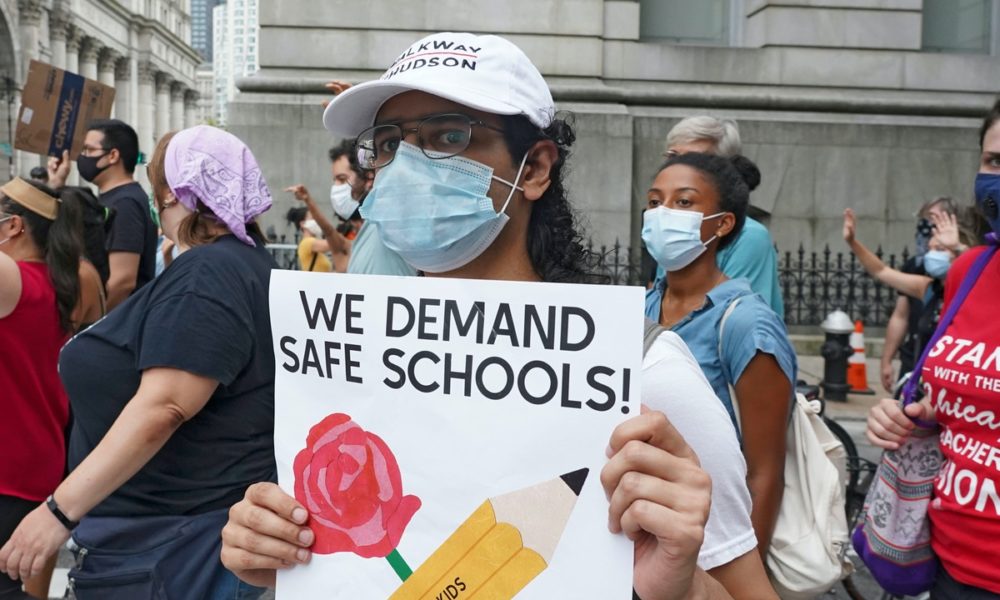 Mayor Bill de Blasio has unveiled woefully inadequate, unsafe, and impossible plans to reopen schools. Rather than improving remote learning for the city’s most underserved and at-risk students or prioritizing safe in-person teaching for students who need it the most, he and Chancellor Richard Carranza have focused almost exclusively on posturing. They insist “it’s time” for students to return to in-person school, and persist despite that infection rates are actually increasing in some neighborhoods and the deplorable conditions in many school buildings actually prevent the measures experts insist are critical for keeping teachers, paraprofessionals, and students safe.

But this fight is much broader than just the schools. It affects everyone. The reopening plan for schools presents a huge public health crisis. The New York State Nurses Association (NYSNA) made a statement in solidarity with a potential teacher strike: “There is no question that reopening in-person schooling will accelerate the spread of COVID-19 and expose educators and school staff to greater risk of infection.”

If the reopening is allowed to continue as planned, say healthcare workers, the second wave of Covid infections will ravage the very same communities that have already suffered the most. Appeals to the city have been useless, as de Blasio and other politicians consider the exploitative economy far more important than the lives of children and workers. While a small number of teachers have been able to obtain medical accommodations to teach remotely, the Department of Education (DOE) refuses to consider accommodating teachers with children who are immunocompromised or otherwise in serious danger of permanent damage or death from Covid. This is literally a life-or-death matter.

Indeed, a strike — the first United Federation of Teachers (UFT) strike since 1975 — would be the only possible way to protect workers and families. Rank-and-file teachers are already discussing and planning for a strike; the union leadership’s decades-long unwillingness to mobilize teachers is coming back to bite them.

One of the most serious dangers that will facilitate the spread of the virus is the lack of ventilation in many school buildings, some of which are more than a century old, lack internal air-circulation systems, and have windows that can be opened only six inches. Other buildings have HVAC systems that have been broken for years. On August 26, footage circulated of the “ventilation tests” being conducted in schools, which apparently consist of paper-clipping a piece of toilet paper to a yardstick and holding it up directly to a vent to see whether it moves at all. It was a stark illustration of the mayor’s callousness regarding reopening.

As the organization Parents for Responsive Equitable Safe Schools pointed out in its recent Washington Post piece, “Unions representing nurses, teachers, principals, and custodial engineers have all said that the DOE’s plan is not sufficient to guarantee safe working or learning conditions.” The stark inequities in public school buildings have now become lethal for the city’s most vulnerable children. The disregard for the city’s most neglected students is, of course, nothing new — for instance, the city botched the distribution of digital devices after giving millions of dollars to Apple.

What is especially egregious about the mayor’s refusal to accept the dangers inherent in his plan is the disastrous budget passed by the City Council in June. It not only largely ignored demands to defund the NYPD, but included so many cuts to social services that 22,000 city workers will be laid off in the coming year amidst a national pandemic and economic crisis already disastrous to so many working-class families. Despite a teacher shortage, this plan includes 9,000 teacher layoffs. Yet, de Blasio expects school workers and parents to trust the mayor’s office to keep people safe.

Parents aren’t buying it. In communities already disproportionately harmed by the virus, they are refusing to send their children to school at a similarly disproportionate rate. The Global Strategy Group research firm found that “84 percent of white public-school parents in New York City say their child will attend school in-person if possible, compared to 63 percent of Latinx parents and just 34 percent of Black parents.” This makes complete sense, as Black communities have been ravaged by Covid at incredible rates. ABC News reported, “Black people are twice as likely as white people to die from the novel coronavirus and more than twice as likely as white people to have a non-fatal hospitalization, the data shows.” This obviously disproves that this reckless reopening is to benefit Black and Brown people who “need to get back to work.”

Last week, de Blasio told teachers, “Answer the call, our transit workers did, our first responders did, our health care workers did … Show up and serve people.” What the mayor left out completely is the death toll among these workers, who were similarly not given adequate protection against the virus — with disastrous consequences. The Metropolitan Transit Authority (MTA) knew enough to cut down service in late March, but transit workers still had no widespread testing available to them and became infected at four times the city’s overall rate. According to Danny Cruz, a rank-and-filer who tracks his fallen coworkers, 146 MTA workers have died.

De Blasio’s priorities are clear. He echoes Donald Trump: opening schools will help get the economy back on track, and the lives of workers are expendable. De Blasio insists teachers need to “serve people,” but it’s blatantly obvious that the people he wants teachers to serve are not students or their families.

Confronting this dangerous situation, many teachers are ready to go on strike to protect lives: those of children and their families they serve as well as their own. Rank-and-file organizing is increasing at a rapid rate through organizations such as the Movement of Rank and File Educators (MORE) and some led by members of the Democratic Socialists of America (DSA).

Unfortunately but predictably, the UFT leadership has neglected planning or building support for a strike now, and instead vaguely talks about the possibility of future plans for one — despite that the start of the school year is less than two weeks away. The UFT is focused on getting a court injunction to prevent some individual schools from reopening. But with de Blasio’s half-baked plans — which include maskless children eating in classrooms every day — all schools are dangerous right now, especially those in low-income communities that still have higher-than-average Covid infection rates.

The leadership of the Professional Staff Congress (PSC), the union representing City University of New York (CUNY) educators, employed the same strategy. When the PSC faced unprecedented layoffs in July, leadership’s response was a court case to buy more time in negotiations, neglecting to engage in serious strike preparations and thereby leaving the union completely unprepared for a strike. A federal judge denied the union’s request for an injunction that would reinstate the workers. This example should serve as a warning about relying on the courts rather than the power of workers ourselves.

The UFT leadership’s continual capitulation to the bosses, exclusive focus on lobbying in Albany, and consistent demobilization of teachers throughout the decades since the 1970s explains why support for a strike is not universal among teachers. Obsessed with “maintaining a seat at the table,” union leadership has used fear-mongering and intimidation to demand members ratify contracts full of concessions, increases in hours, and raises as low as 0 percent in some years. Resistance to these givebacks is routinely met with scare tactics, with the leadership insisting that if the UFT doesn’t do what the mayor wants, there is no alternative but to strike — illegal under New York State’s Taylor Law — and thus completely decimate the union, with members thrown out into the cold.

It is the courts that enforce the Taylor Law on the side of the bosses. Still, the UFT leadership insists that the best way to protect children, teachers, and families right now is to appeal to those same courts they have long said would gladly crush the union. At the same time, they are halfheartedly and rather vaguely trying to revive the idea of a strike in an attempt at a Plan B should the legal route fail. More than a week after announcing a strike was being considered, there have been no UFT town halls or Delegate Assemblies, although a handful of district representatives have held meetings with some teachers.

The result is that teachers are confronted with a choice: contract Covid or go on strike. Some are not sure which terrifies them more. This is unsurprising, and reveals the UFT leadership’s determination to work against the interests of teachers as it protects its own relationship with the politicians. It’s to be expected from a union president who, as the infection spread in New York, said that he and the mayor would have to “respectfully disagree” on whether to shut down schools. Only the threat of a rank-and-file sickout forced him to take a more militant stance.

Just as with those sickout plans in March, more and more teachers are now indicating their readiness to self-organize.

What we need now is to break from a union leadership that insists on begging the courts for protection and refuses to build for a strike even given the dangerous circumstances. Teachers must engage in serious rank-and-file organizing and continue to build coalitions with parents, healthcare workers, activists, and other community members to fight for the lives of school staff members, students, and families. Only true workers’ power and the real threat of a strike can stop attacks on education and the lives of those involved. A powerful municipal workers’ strike such as this has the potential to bust the Taylor Law once and for all, empowering other unions and opening the gates to other strikes by major unions.

A strike is the only way to force the city government to understand that teachers are serious, that #WeWon’tDieForDOE. It shows the way forward for workers whose lives are endangered daily by a government that prioritizes profits above people.

Note: An earlier version of this article was titled, “NYC School Reopenings: Strike or Die.”