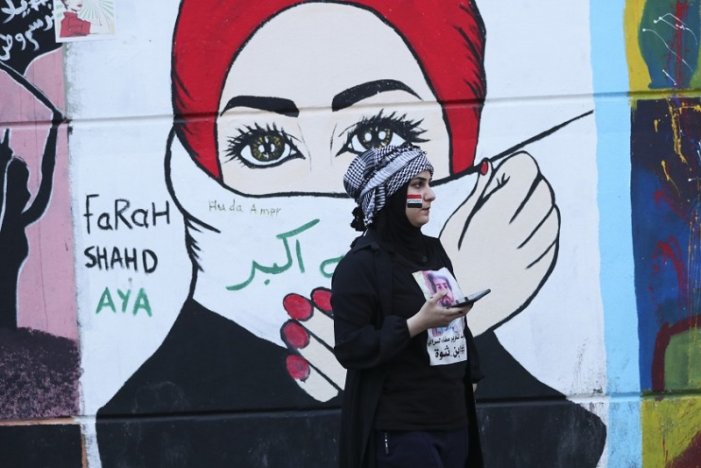 Since the eruption of the protest movement confronting the Iraqi government in October 2019, Baghdad’s Tahrir Square has become an open-air gallery. As the Russian poet Vladimir Mayakovsky would say, the streets were transformed into a canvass for hundreds of popular artists, in this case many of them women. 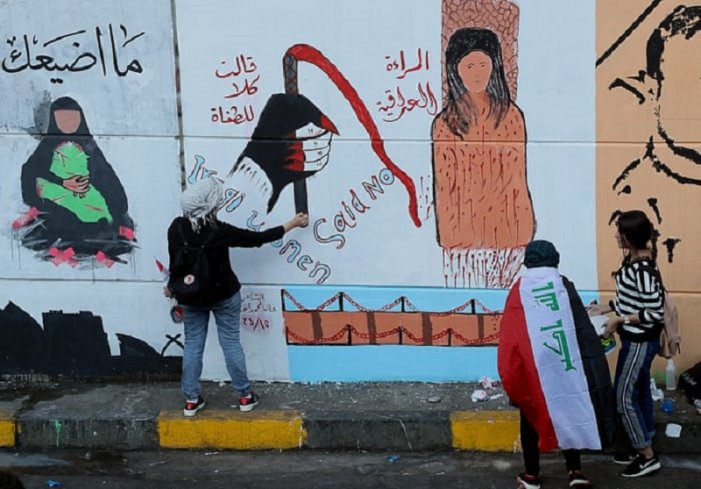 One mural painted in charcoal depicts a group of workers advancing and carrying a fallen friend in their arms. In an interview with a New York Times reporter, a young former hospital quartermaster named Abdullah notes, “Look, the man in the middle is begging the security forces, ‘Please don’t shoot us! We have nothing. Nothing.’” 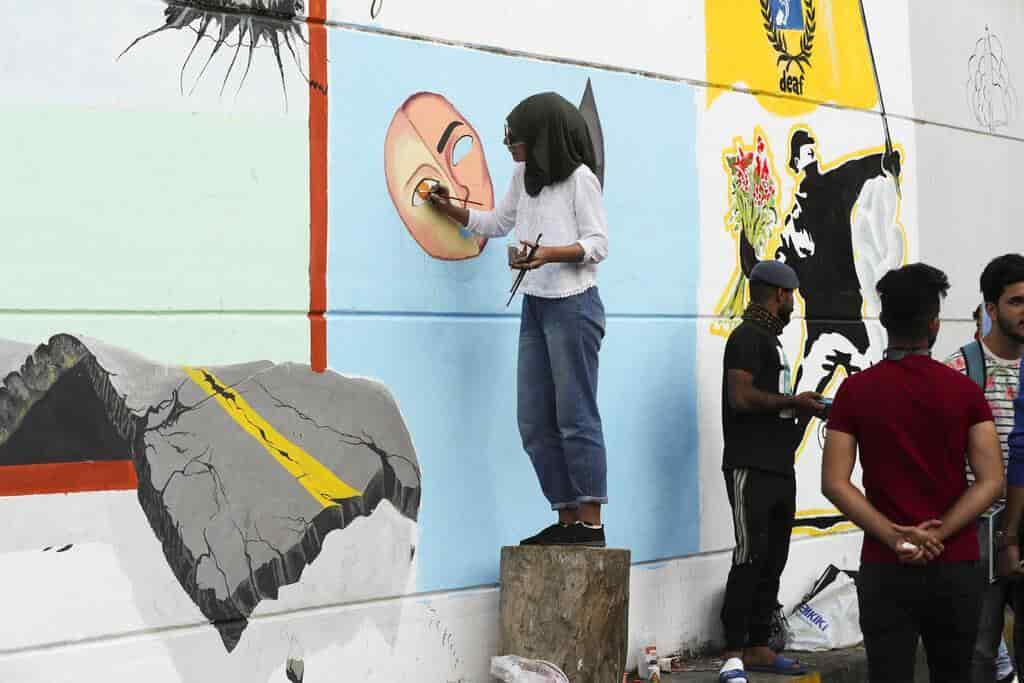 One of the emblematic buildings at the heart of the protests is the Turkish restaurant building, which overlooks the Tigris River. It is the self-professed stronghold of the protesters who are confronting the Iraqi government. The restaurant is adorned with a feast of banners and placards that roar in the wind against the Iraqi authorities and repressive forces. 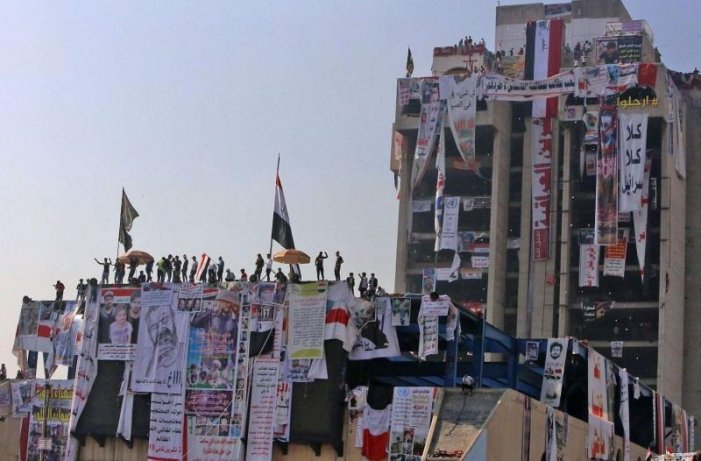 Paintings, sculptures, photographs, and altars erected in homage to those who have fallen in the protest vibrate with the colors of weariness and oppression. These artistic monuments are a disruptive image in the face of a gray Iraq crumbling under wars and economic crises. 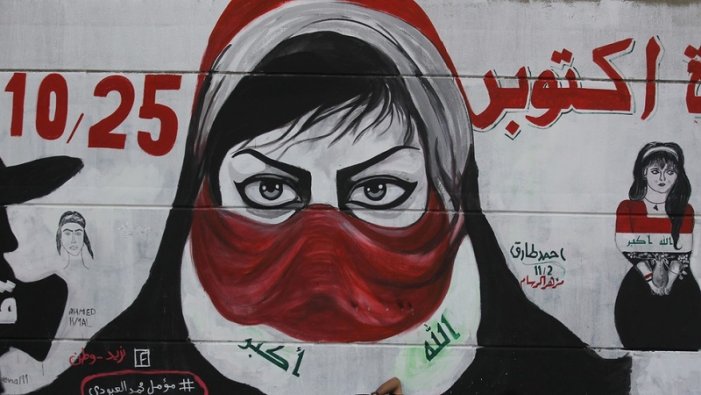 Iraq’s streets come alive with many bold images. Some of the themes that have been brought to life include portraits of fiery women who represent all those who rebel against oppression and the government, a painting of Rosie the Riveter with an Iraqi flag on her cheek, Vincent van Gogh’s Starry Night has the Turkish restaurant building in place of a cypress tree, many scenes of government repression, trees, and portraits of protesters killed by repressive forces. Sadly, about 527 protesters were killed by the repressive forces, and around 23,000 were injured. 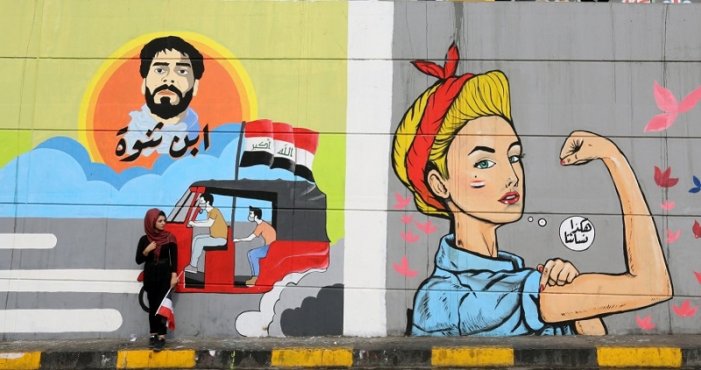 There is also a young housepainter who now paints murals and signs using refractory paint. He uses these particular colors to outline the edges of the streets because the government routinely cuts off the lights at night, which poses an added risk to the movement of injured protesters. 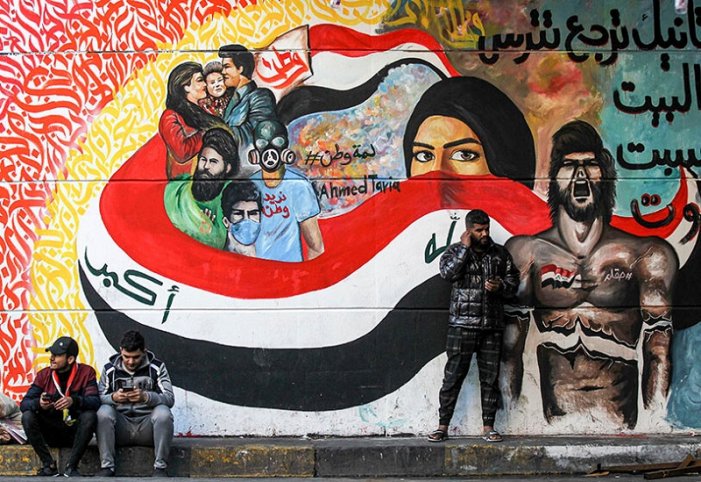 Why Did the Iraqi People Take to the Streets?

The demonstrations on October 1, 2019 were a result of rising frustrations with the corrupt practices of senior government officials, declining services, widespread poverty, and unemployment. These protests quickly escalated into anger against the traditional political parties, the government, and institutions perceived as subordinate to foreign interests, particularly Iran and the United States.

By the end of October, the demonstrations forced Prime Minister Adil Abdul-Mahdi to resign. Mohammed Allawi, a member of an Iranian-aligned group, was appointed prime minister by parties repudiated by the Iraqi people. As such, the protesters’ demands remain unfulfilled. 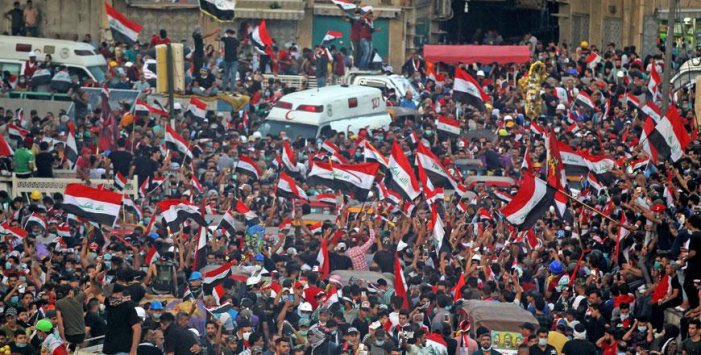 At the beginning of January, the unilateral U.S. attack on Iraqi territory that killed Iranian general Qassim Soleimani led the Iraqi parliament to vote for the departure of American troops from Iraqi territory. While this move was previously unimaginable, the parliament was moved into action by Trump’s imperialist offensive and the continued popular mobilization in the streets.

On Friday, militias aligned with Muqtada al-Sadr, a Shiite cleric who initially supported the protests, attacked a camp in Al Sadrain Square, in the city of Najaf. This resulted in the death of eight demonstrators. Yet despite the pervasive repression, protesters continue to flood the streets of Iraq, and the rage of Iraq’s hardened people is reflected on the walls. 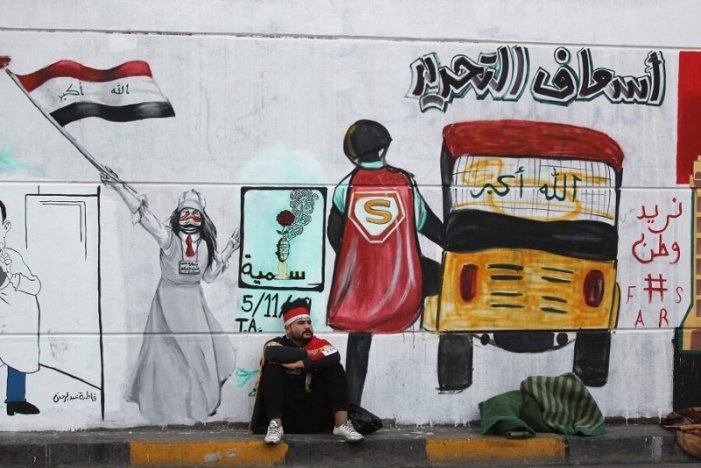