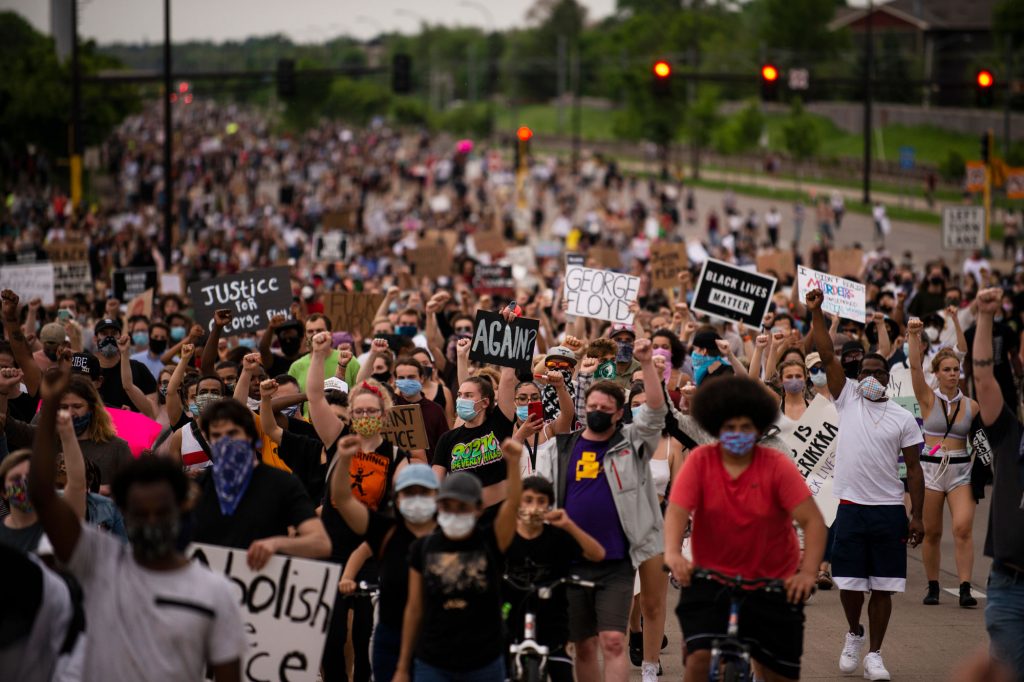 On May 25, 2020, former police officer Derek Chauvin murdered George Floyd on suspicion of using a $20 counterfeit bill. According to the New York Times, a poll conducted by Civis Analytics showed that as many as 26 million people participated in what has been described as the biggest uprising in US history. More than 17,000 people were arrested in 50 major US cities just in the first two weeks of the uprising. Over 300 people were charged with federal crimes. In Portland, Oregon there were reports of federal officers abducting protestors off the streets in unmarked cars.

While there doesn’t seem to be any comprehensive data on the exact number of protest-related arrests since the George Floyd uprising, reports of kettles and mass arrests during subsequent Black Lives Matter protests around the country indicate that state repression has continued. In April 2021, after the murder of Daunte Wright by former police officer Kim Potter, the police used tear gas and rubber bullets on protestors, medics, and the press. As part of the ambiguously organized Operation Safety Net, in a single night, law enforcement arrested 100 people who were protesting the murder of Daunte Wright.

In order to escape accountability, the state has also organized “task forces” composed of undercover nameless federal cops that kill with impunity as in the case of the murders of Micheal Reinoehl and Winston Smith.

Another example of state repression are the anti-protest bills that have been introduced all over the country since the murder of George Floyd. Republicans have introduced over 90 bills in 35 states that increase penalties for protestors. Some of these bills also provide immunity for motorists who hit protestors with their vehicles, such as in the case of the murder of Heather Heyer and more recently Deona Marie Erickson. In an “Unclassified Summary of Assessment of Violent Extremism,” the Office of the Director of National Intelligence included in its description of “domestic violent extremists,” people who oppose capitalism and corporate globalization.

Many of the people arrested during the George Floyd uprising and subsequent protests have had their charges dropped but too many are still facing criminal prosecution. I spoke to Amy and Violet (not their real names), two arrestees who were part of the I-94 mass arrest in Minneapolis on November 4, 2020. The protest had been called by community organizations and labor unions against racism, economic injustice, and threats from Donald Trump that he would not cede the election. Both Amy and Violet were arrested that night after law enforcement officers kettled over 600 people on the freeway in Minneapolis. It was the first arrest for both activists, who have rejected plea deals and are taking their cases to trial.

Amy works in an administrative position. She described the anxiety, fear of professional repercussion, and difficulty finding housing due to pending charges showing up in background checks. The legal process of fighting the charges can be slow and unclear — almost deliberately so — to make people give up and take plea deals. She said about her decision to fight her charges, “I’m not interested in making this easy for the state. I don’t think it’s right that they charged us. Governor Walz wanted to make an example out of us. I’m pissed off about this and it’s not right. It was an obvious tactic to repress us because highway protests get a lot of visibility. The reason we were there was to bring visibility to a cause. Going on highways is illegal but so is murdering people and so is not ceding the Presidency if you lose.” She talked about her anxiety about the future, about being in limbo with pending legal charges and feeling frustrated with how the arrest has affected the way she shows up for her community. She said, “technically, the charges you have should not affect the charges you get in future. People have been charged with felonies because of gas masks or having a laser pointer. If I get arrested again, the police will see that I have another charge and they will up the ante.”

Violet, who has been an activist since 2008, said her job is in an “intermission” due to the pandemic and that she is waiting for her industry to come back. She said that her arrest has not deterred her from showing up to protests: “The police are getting more heavy handed and the people are getting more frustrated. I got a gas mask and upped my PPE after Daunte Wright’s murder. I got a better helmet and realized that the fight was going to be longer.”

In response to the brutal state violence, different groups have organized Drop The Charges campaigns in Michigan, Minnesota, Alabama, Atlanta, Florida and Arizona. Some of these campaigns, such as Minnesota Uprising Arrestee Support, have provided services and legal support to arrestees. The common goal of these campaigns, however, has been to get all charges dropped.

A Public Tribunal as a Means to Build Revolutionary Power

Last summer, Detroit activists organized a public tribunal in the tradition of the League of Revolutionary Black Workers during the 1967 uprising in Detroit. The tribunal was organized by Detroit Will Breathe (a youth-led militant organization against police brutality and systemic racism) as a tactical maneuver based on assessment of the balance of forces between the state and the people. The tribunal provided a space for the oppressed and victims of police violence to share their experiences without fear of being silenced. Their goal was to guide the people in a radical direction by allowing them to express their revolutionary potential.

The effectiveness of the public tribunal organized by Detroit activists highlights the importance of having such spaces — free from co-optation by the ruling class and its collaborators (such as union bureaucracies or peace police) — where working class and oppressed people can openly discuss their struggles and organize together against state repression rather than being forced to accept watered-down “solutions” that only serve to maintain the status quo. The momentum from such tribunals have the potential to move inside our workspaces and push labor unions to engage in independent class struggle and away from their current role of toeing the line for the capitalist Democratic party.

Activists Demand Accountability from the State

I asked Violet and Amy for any parting thoughts. Violet said, “If the murder of George Floyd and Daunte Wright and Deona Marie was not enough, then what is it going to take? Those things happened and there has not been any change. I see performative shit that will make centrists feel better. Are they going to kill people [now] during mass arrests?” Amy said about class struggle and racist, violent policing: “Everyone’s charges should be dropped. Even those who burnt down the 3rd precinct. People are lucky that there was only two weeks of looting [after George Floyd’s murder]. The amount of shit that the working class and people of color have dealt with for years. I saw a Black woman being interviewed and she said that you’re lucky that all we want is equality. What the cops are doing is against the Geneva Convention. They are war criminals. Stealing protestors’ water, attacking medics and the press, declaring protests riots. We are at war with a force that cannot be held accountable unless we burn things down.”

The state justifies its violence by presenting it as a response to crime and violence committed by the people. This is a lie. The violence against the state is a direct response to its own unchecked violence. The ruling class is afraid of the collective power of the working class and the oppressed. And it has determined that its survival depends on brutally suppressing us. When dealing with an abuser, we should not accept punishment for our own victimization. We want abolition of the police and for all jobs to be under worker control but we can start with a demand to drop the charges, which is a bare minimum.