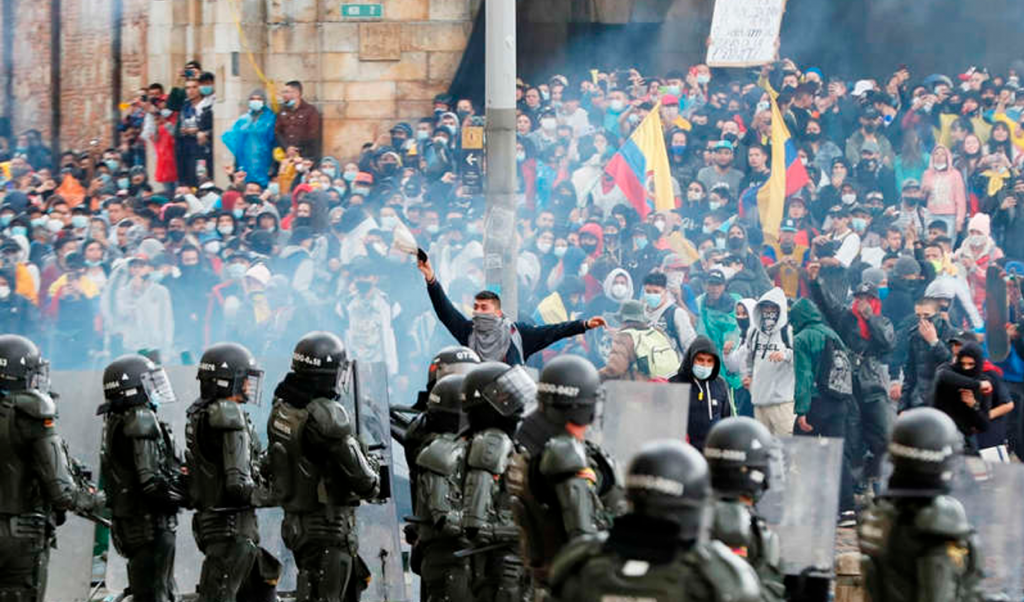 Without a doubt, youth were the most significant force in the 2021 protests that swept Colombia. That explains why they are now the focus of repression by the government of President Iván Duque. Young people who protest in the streets are called vandals, terrorists, and guerrillas, and then they are brought to court, where the prosecutors and judges declare them a “menace to society.”

Young people who were on the front lines in Bogotá, Cali, Medellín, and Paipa have been taken into custody, even when a judge authorizes house arrest the Attorney General’s office rejects it. They have been charged with violence against a public servant, instigation to commit a crime for terrorist purposes, damage to the property of others, disruption of public transportation, throwing dangerous objects, and attempted murder.

In many cases, prosecutors have sought sentences exceeding 20 years in prison — essentially a living death sentence for these young people. Many of these young people have no defense attorneys other than those assigned by the court or family services.

Meanwhile, as young people are being labeled as terrorists, prosecuted, and given long prison sentences with no right to parole, the Attorney General’s office, Ombudsman’s office, and judges co-opted by the Duque government have all been working to hide the numbers of murders, disappearances, rapes, and all kinds of crimes committed against protesters, throughout the National Strike, by the police and the Mobile Anti-Disturbance Squadron (ESMAD). As the Institute for Development and Peace Studies (INDEPAZ) has stated, “The government and the Attorney General’s office want to limit the homicide cases to those with incontrovertible evidence in the midst of the demonstrations.”

According to the Temblores NGO, 2,005 demonstrators have been arbitrarily detained.

All of this reveals the Duque government’s repression against the just demands of impoverished people who lack rights to healthcare, education, public services, work, and decent housing. Some 93 people are still missing, and the police and ESMAD killed 75 during the two-month period of the National Strike. The government stands for protecting the police while prosecuting, killing, and disappearing demonstrators.

Returning to the figures from Temblores regarding the National Strike, there have been 4,687 cases of police violence; 1,617 cases of physical abuse by the police; 82 victims who had an eye shot out; and 28 victims of sexual violence by members of the police. In addition, Temblores reports 228 cases of protesters being wounded with live ammunition; 48 cases of ongoing respiratory ailments from tear gas; and 784 violent interventions overall by security forces.

The government has taken further steps to criminalize protest, including the passage by the Senate on December 22 of a Citizen Security law introduced by the Ministries of Justice, Interior, and Defense. Since June, the Duque government had been trying to “regulate social protest” through this bill. Its provisions include toughening the penalties for hiding one’s face or otherwise hindering facial recognition, as well as for assaulting or killing members of the police force. It also legalizes certain methods of defending private property.

Iván Cepeda, a member of the Senate from the Polo Democrático party, described the law this way to the Colombian newspaper El Espectador:

It includes several provisions that affect the right of assembly and association … The bill spells out social protest as the origin of insecurity. It focuses on increasing the penalties for activities related to protest and strengthens self-defense actions under the concept of ‘privileged self-defense’ that recalls the strategies of the convivir [neighborhood vigilante watch groups] that were the legal prelude to paramilitarism.

It is common knowledge that passage of the law was rushed through with pressure from the president’s office. The opposition did not vote for it. As Senator Aida Avella of the opposition party Unión Patriótica put it in a tweet, “Three ministers, of Justice, Interior, and Defense, are the authors of the bill, which they call ‘strengthening citizen security’ — violating various articles of the National Constitution.”

It is also believed that the law was pushed through in consideration of potential fraud in next year’s elections for Congress, Senate, and the presidency, and in anticipation of the protests that could occur — given that the right-wing parties are at a low in popularity right now and so-called progressives are likely to win.

Considering all of the repressive and unpopular policies of the Duque government, it has become essential to organize independently of the bosses’ parties, as well as of the center-left and progressive parties — which while denouncing the current situation stop far short of calling for confronting it in the streets. It is also essential to organize independently of the union leaderships that put the brakes on this year’s protests, refusing to call workers’ assemblies in which a real plan of struggle could be spelled out for defeating Duque’s entire right-wing program.

In the face of the government offensive, it is vital to mobilize not only young people, but also workers, indigenous peoples, and peasants to wage a struggle that confronts and defeats the Duque government and the entire right wing.

First published in Spanish on December 31 in La Izquierda Diario.