Repression in Catalonia Before the Referendum

A wave of repression under orders of the Spanish government in Madrid attempted to halt the referendum on October 1. 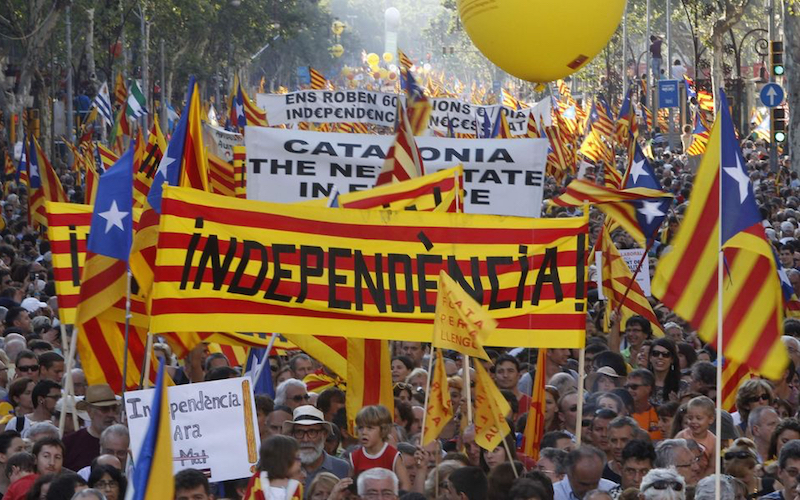 Just ten days before the proposed referendum on the question of Catalonia’s independence from the Spanish State, a wave of repression under orders of the Spanish government in Madrid attempted to halt the referendum on October 1.

On Wednesday, September 20, 14 Catalan officials were arrested by Spanish Guardia Civil officers under the orders of Prime Minister Mariano Rajoy. Officials such as Lluis Salvado, the Secretary of Taxation, and Josep Maria Jové, Secretary General of Economic Affairs, were among those detained. Over a dozen Catalan regional government offices were also raided. Those arrested are being detained on charges of disobedience and embezzlement related to the referendum. Following the detentions, the Guardia Civil confiscated millions of ballot papers, posters, and other campaign materials. Separatist politicians were also prevented from spending public funds on the referendum after Catalonia’s finances were seized by Rajoy’s government.

In response, thousands of people have taken to the streets in Catalonia, and throughout the Spanish State.. Protests in Barcelona have been taking place outside the Economic Conselleria, and on Via Laietana, where the Conselleria de Governació, in the hands of the national CUP (Candidatura d’Unitat Popular, or Popular Unity Candidacy), and the Diagonal Avenue, where various universities are located. The mobilizations have continued through Monday and have included over 40,000 people.

In the universities, thousands of youth have demonstrated for the right to decide.. In Barcelona, thousands of students from the Universitat Autónoma de Barcelona (UAB) called to cancel classes and mobilize. While one block advanced toward the Supreme Court to demand the release of the 14 detained officials, another occupied the university in a unitary action of the bloque soberanista, organized by the Universitats per la República, a university platform for the right to decide, with the participation of members of the CUP, ERC (Esquerra Republicana de Catalunya), PDeCat (Partit Demòcrata Europeu Català), and Podem, which gathered around 3000 people.

While the cause for the Catalan independence is supported by a wide majority in Barcelona, some voices in the students’ movement advocate for organizing independently from the university officials in order to carry out truly massive university strikes alongside a general strike in defense of the Catalonian referendum.

There have also been mass demonstrations in solidarity across other cities in the region, such as Olot, Vilafranca, and Manresa, as well as throughout the State, such as in Madrid and Zaragoza. Unions and parties have also organized protests from Galicia to the Basque Country.

Rajoy has argued that the separatist politicians are encouraging civil disobedience by passing a law that allowed for the referendum, claiming that the law is illegal because the constitution of 1978 does not mention any provision regarding a vote on self-determination.

At a massive demonstration in Zaragoza, Santiago Lupe, director of Izquierda Diario and of the Corriente Revolucionaria de Trabajadores y Trabajadoras (CRT), denounced the escalating repression that “…is having repercussions throughout the entire state, as we have seen in Madrid, Vitoria, and Burgos…of those who have taken to the streets to express something as basic as the support for a democratic right…”.

Despite the thousands of police sent to Catalonia to repress those protesting for the right to vote, several Spanish neo-Nazi groups threatened the Assembly of Unidos Podemos without reprimand in Zaragoza.

On Sunday, September 24, the separatist group Omnium Cultural distributed hundreds of ballots during demonstrations in Barcelona.

Despite the repression, the massive show of support and solidarity proved that the government, the Partido Socialista Obrera Espanol (PSOE, Spanish Socialist Party), and Ciudadanos (Citizens Party) do not have popular support and that the Regime of ’78, (The constitutional regime that enabled the Spanish bourgeoisie to retain power and transition to a constitutional democracy following dictator Franco’s death, in which the Basque and Catalan bourgeoisies were integrated to the Spanish State) continues to create a repressive atmosphere, not only for the Catalan people, but also for workers and people throughout the entire Spanish State.

Rajoy’s government is facing a moment of political isolation that could be lethal, similar to what happened to José María Aznar in 2003.. The Catalan question is the Rajoy government’s greatest test: a test of the Spanish Transition to Democracy in 1975, the Regime of ’78, and its institutions. It remains to be seen what will happen on October 1. Workers and the Catalan people can be at the head of a new democratic movement in the Spanish State. The period of social passivity is ending, and a new stage of the social masses is opening inside of the political scene: Down with the reactionary Regime of ’78!