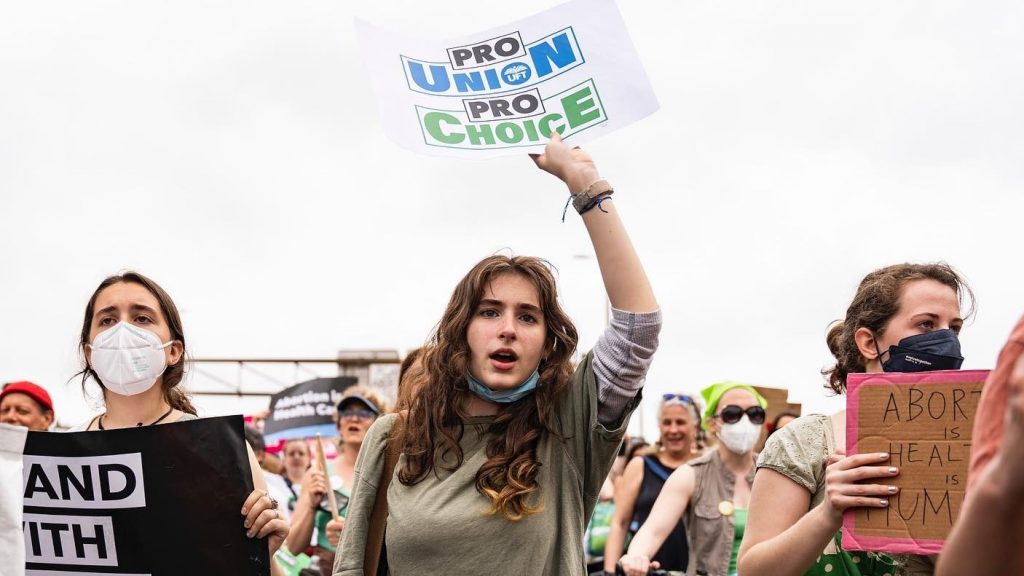 After the Supreme Court leak, we all know: it’s a matter of days before abortion is made illegal in at least 13 states across the country.

The Right is on the offensive: in addition to taking away abortion rights they’re also attacking voting rights, trans rights, and especially trans youth. This right wing won’t stop at overturning Roe — it will also come for abortion pills and for abortion all over the country, and wants to take away the few rights that have been won by trans and LGBTQ+ people.

The situation is dire.

Planned Parenthood and the Women’s March are essentially absent from the struggle. While they organized a big march when the decision first leaked, they are nowhere to be seen now.

Some unions have issued statements in support of abortion rights and a few brought small contingents of workers to the marches organized by Planned Parenthood. The vast majority of unions, however, have said and done essentially nothing as a large swath of their members lose the right to bodily autonomy. This includes the two biggest unionized forces in the US– teachers and nurses who are disproportionately made up of women.  It’s not surprising that unions have done so little — so many “business unions” see their members as at best clients to provide services to in order to stop any radical activity while using workers’ money and energy to tie those workers to the Democratic Party. These top down unions tied to capitalist politicians aren’t fighting forces for the working class.

If we want to defeat these attacks on our rights, the rank and file have to take things into our own hands in this struggle. We can’t wait for union leadership, and we certainly can’t wait for Planned Parenthood or the Women’s March.

These kinds of committees are meant for action, but also for discussion. They are a way to build community, build political agreement, and discussion amongst co-workers.

These committees aren’t just another activist group. They are important for two primary reasons. On one hand, they have the ability to mobilize new sectors — the over 60 percent of people who agree that Roe v Wade should not be overturned, but may not have taken the streets or any action. Our task needs to be to move those people, and what better way than to discuss it every day with co-workers — the people we have to see five days a week for work either way.

But the most important reason for this kind of organizing is because the working class is immensely powerful. All profits come from our labor. Everything runs because of our labor. And that means that we can really shut it down, not only in the streets, but in the place it hurts our oppressors and exploiters the most: in our workplaces.

On a small scale, Left Voice has begun organizing in this perspective at CUNY. CUNY for Abortion Rights was formed shortly after the leaked Supreme Court decision came out to organize students, faculty, and staff. Members include students and faculty from the DSA, NYC for Abortion Rights, Left Voice, as well as the union caucus Rank and File Action and other groups. Over 200 people from all CUNY campuses have signed up to participate and so far, the group has organized a walkout at Brooklyn College and support for a protest by Staten Island students. Political science students organized a panel on abortion rights including Jenny Brown, author of Without Apology, Hennessy Garcia from NYC for Abortion Rights, and Tatiana Cozzarelli from Left Voice.

These kinds of rank-and-file committees aren’t a substitute for unions; we must demand that our unions take action and these committees can be a mechanism to force them to do so.

These kinds of committees also mean that we don’t have to wait for when the Supreme Court decision drops or when bans are implemented — we can organize with our co-workers now. If you have three or four co-workers who want to form a rank-and-file committee, do it! Put out a call, get folks to sign up, and organize an action in the workplace or a contingent at a march. If you need help or ideas, get in touch with us ([email protected]) and we can help!

Rank-and-file committees can also be put towards fighting for other issues within and outside of the workplace, and strengthen our ability to fight for a good contract — an organized workplace is a workplace that is dangerous to the bosses. They can fight for higher wages, longer break times, better healthcare and other workplace demands. They can fight for full reproductive rights and healthcare, like the Jezebel workers did when they demanded trans inclusive healthcare at their job. They can mobilize in the Black Lives Matter movement or in solidarity with other struggles. They can also morph into or support other groups like the “women’s commissions” organized by the socialists in the early 20th century, or those currently organized in unions around the world. (A Starbucks worker in Chile will be speaking in NYC at May Day space about organizing a women and non binary commission at her workplace.)

As the Right advances, it is clear that no one is coming to save us but ourselves. It is up to us to put up this fight, so let’s get to it. And let’s do it in the place we are most powerful: our workplaces, the very heart of what makes capitalism run.