Despite a rabid anti-union campaign by the management, Stamford Sheraton workers voted in favor of joining UNITE-HERE. 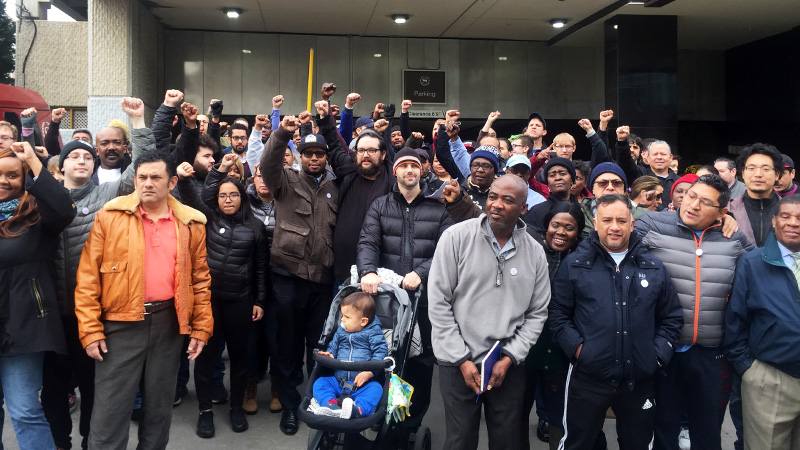 In the freezing morning of December 13, droves of workers of the Stamford Sheraton started walking in at 6 am. Their unusual enthusiasm responded to a clear cause: it is the day they are voting to join a union. Twelve hours later, by the time the poll was closed, sixty-nine workers had voted in favor, thirty-two against. Sheraton workers are joining their sisters and brothers of UNITE-HERE local 217, which represents workers at the Hilton and Hyatt in the same city.

The diverse hospitality workforce of Stamford, Connecticut is undergoing a dramatic change. After years of disrespect, racist abuse, poverty pay and exorbitant healthcare costs that cover very little, hotel workers are getting organized with UNITE HERE local 217. Things are changing: first the Hyatt went union in Greenwich, CT, then the Hilton Stamford, and now the workers at the Sheraton Stamford have joined the fight and “gone public” with their union drive.

For as long as memory serves Sheraton workers have felt voiceless. Some days were better than others, but the people who keep the hotel running never felt listened to, let alone respected. Employees went to Human Resources looking for help addressing problems on the job, only to learn that HR does whatever the boss wants — rarely what the workers need. People learned through experience the real message of the Sheraton owners and management: “keep working, be grateful you have a job and shut up.”

But the Sheraton workers didn’t stay quiet. It began slowly. Housekeepers whispered indignantly about high workload and back pain. Banquet servers remarked about management favoritism. Front Desk staff questioned why rooms cost so much when hourly wages remain low. And rumors, gossip really, started to permeate throughout the departments: “Aren’t the Hilton workers doing something?” — “I heard the Hyatt is union.” — “Management is scared!”

Workers met at the bar after work to vent their frustration and talk about something better. Those most committed to the struggle went to co-workers’ homes, day after day, to win more people to the union. Secrecy was maintained at all costs for fear of management catching word and firing the leaders. A committee of the most respected worker-leaders formed, and a date was set to “go public” and confront the boss with the workers’ demands.

On November 19, Sheraton workers and supporters marched to the hotel and occupied the lobby. Karina Mendoza, mother of two and a worker from the housekeeping department, delivered the petition for union recognition, and workers gave testimony in English, Spanish and Creole about the problems they face on the job and why they need a union. “We’re tired of the abuses and injustices. We want benefits. And we want respect!” said one worker, to loud applause.

Afterward, union supporters amassed outside the hotel to continue rallying. The atmosphere was captured on video. Importantly, a sizable delegation of workers from the Hilton and the Hyatt were present to show their support, as well as members of other unions who came in solidarity.

The Sheraton workforce is one of the most diverse in the city, with workers hailing from across the Western Hemisphere and beyond: Dominican Republic, Colombia and Mexico, as well as Jamaica, Haiti, and the United States. Local 217, far from ignoring the particularities of the workforce, has consciously embraced the multi-lingual and multinational elements that the workers bring with them. A union banner reads: “Equality for Immigrants — Women — Black Workers.” The workers know that to stand strong, they must build unity.

Enough With Corporate Politicians – Workers Should Call the Shots

One concerning aspect of the recent organizing drive was the way in which politicians from the Democratic Party were brought in by the union to rallies to address both the workers and the hotel bosses. Even Stamford mayor David Martin stopped by to say a few nice words, positioning himself as pro-labor. Yet Martin already knows the Sheraton general manager, Thomas Carlos, and himself administers one of the most unequal cities in the U.S. The business-trained mayor is a good friend to wealthy elites — not to the workers at Sheraton whose votes he wishes to secure for his own gain.

Sheraton union activists know that their power is based on workers’ solidarity within the hotel and with fellow hotel workers across the city. Today’s victory is a reflection of that. This solidarity reflects the need — the class interest — for all the workers to fight as one against the employers. Unions explicitly prohibit management from being part of the bargaining unit because management serves the owners. Corporate politicians like Martin should not be welcomed into the workers camp for a similar reason: whereas Thomas Carlos runs the hotel in the service of his wealthy masters, so too does David Martin run Stamford in the interests of the rich.

When the union election approached, the Sheraton bosses drastically stepped up their anti-union efforts in a last-chance bid to keep workers powerless. Fearing that a unionized and emboldened work force would cut into their million-dollar profits, Sheraton management hired the very same anti-union consulting firm that Hilton hired earlier this year: Cruz and Associates. Indeed this union-busting agency was the firm Trump hired in an attempt to prevent housekeepers from unionizing at one of his hotels. Professional union busters stayed in the Sheraton for the duration of the campaign.

The Sheraton bosses did everything they could to sabotage the power, unity and determination the workers have built over months. Sheraton employees were forced to attend “captive audience” meetings to hear from the oh-so-benevolent owners why unions aren’t in the workers interest — as if the hotel bosses ever cared about the workers in the first place. The mandatory anti-union meetings the workers were subjected to lasted hours, five hours in one instance. In another case, workers were forced into one of these coercive sit-downs at 2am! The union busters were available 24 hours a day and the company has no problem using them to bully and sow disinformation.

Additionally, management tried to use the carrot and the stick: some workers were promised a pay raise or other perks if they voted “no,” while all sorts of lies about UNITE HERE 217 were concocted to scare workers from voting “yes.” But despite all these dishonest efforts and costly resources, the management failed. Today workers of the Sheraton Stamford dealt a resounding defeat to the management. The unity of workers trumped the bosses’ ruses, divisive strategies and scare campaign. Now is time to celebrate. More fights are in the horizon, but the workers won the first battle.