Somalia Ranks Second to Last in Global Health Security. Why is the U.S. Bombing it During the Pandemic?

The U.S. has intensified its air raids against Somalia during the pandemic, exacerbating the country’s humanitarian crisis. We must demand an end to military interventions and direct resources to fight the Coronavirus pandemic. 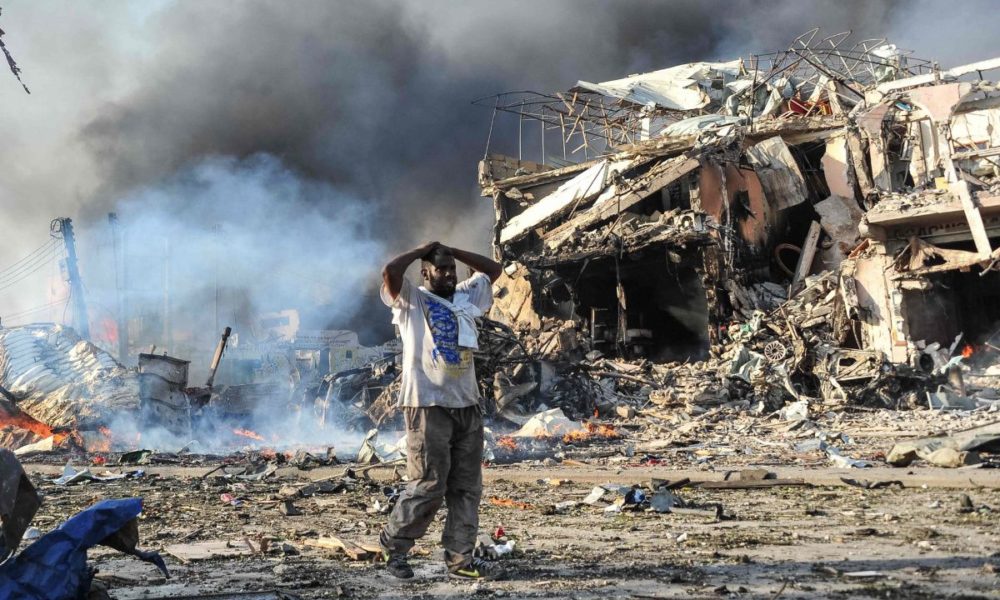 While the Coronavirus crisis unfolds across the world causing unprecedented suffering, the U.S. has expanded its vicious air war against Somalia. Since the start of this year, the U.S. has conducted 39 airstrikes, compared to the 36 strikes conducted during the entirety of Barack Obama’s presidency. While the U.S.’s bombing campaign against Somalia is often described as hidden, it has taken a tremendous human toll. It is especially devastating for a country with woefully inadequate health resources to confront the Coronavirus.

As of this week, Somalia has 390 confirmed cases of Coronavirus, a number which is expected to increase. Due to decades of military conflict abetted by U.S. foreign intervention targeting Al-Shabaab, 2.6 million people in Somalia are internally displaced and crowded into settlements with inadequate water, sanitation, and basic hygiene access. These conditions, which preclude recommended preventative measures such as social distancing and hand-washing, are a tinderbox of disease transmission.

The long-standing conflict in Somalia has likewise decimated healthcare infrastructure, exacerbated by U.S. involvement. Somalia ranks 194th out of 195 countries in global health security. It has no ventilators, and only 15 ICU beds for a population of 15 million people, not to mention the shortage of more basic medical resources such as oxygen. Large-scale Coronavirus infection, which seems increasingly likely due to the humanitarian crisis in the country, will be devastating.

Nonetheless, the U.S. has been steadily increasing its military engagements both in Somalia and around the world. In December, Congress passed a staggering $738 billion defense budget to support the country’s military involvement in  80 countries. Somalia is one of seven countries where the U.S. is conducting direct air and drone strikes, and is home to five U.S. military bases, the second most in Africa. Military engagement in Somalia is poised to continue increasing despite calls by UN Secretary-General António Guterres to implement ceasefires globally to focus efforts on suppressing the Coronavirus crisis.

The dire situation within the U.S. as a result of the pandemic has only further proven that the government must spend resources on public health, rather than on its war machine. Across the country, people are protesting the lack of PPE, and many hospitals are at their breaking point. Since the start of the pandemic, over 9 million people in the U.S. have lost their health insurance, and over 26 million people have filed for unemployment claims. Even before this crisis, 8.5% of Americans lacked health insurance. The obscene $738 billion defense budget could be used to fund hospitals and ICU beds, particularly in under-resourced areas, and provide much-needed support for vulnerable people and those who have lost their jobs.

During the pandemic, U.S. military violence has been undeterred by the health crisis. In addition to air raids in Somalia, the U.S. has bombed Iran, and the Saudi-led coalition’s bombing campaign against Yemen – supported by the U.S. – has also continued. These actions exacerbate the humanitarian crises in these countries, and seriously hamper efforts to tackle the Coronavirus pandemic.

When the capitalists say that there is no money to help hospitals in need, or to provide relief for unemployed people, it is a lie. The military budget should be immediately directed towards combating the pandemic and to aid the struggling working class.