Starbucks has fired a union organizer at the 31st Street/Ditmars Blvd store in Queens, New York. As the company continues to union bust, the workers are continuing the fight and requesting help supporting fired workers. 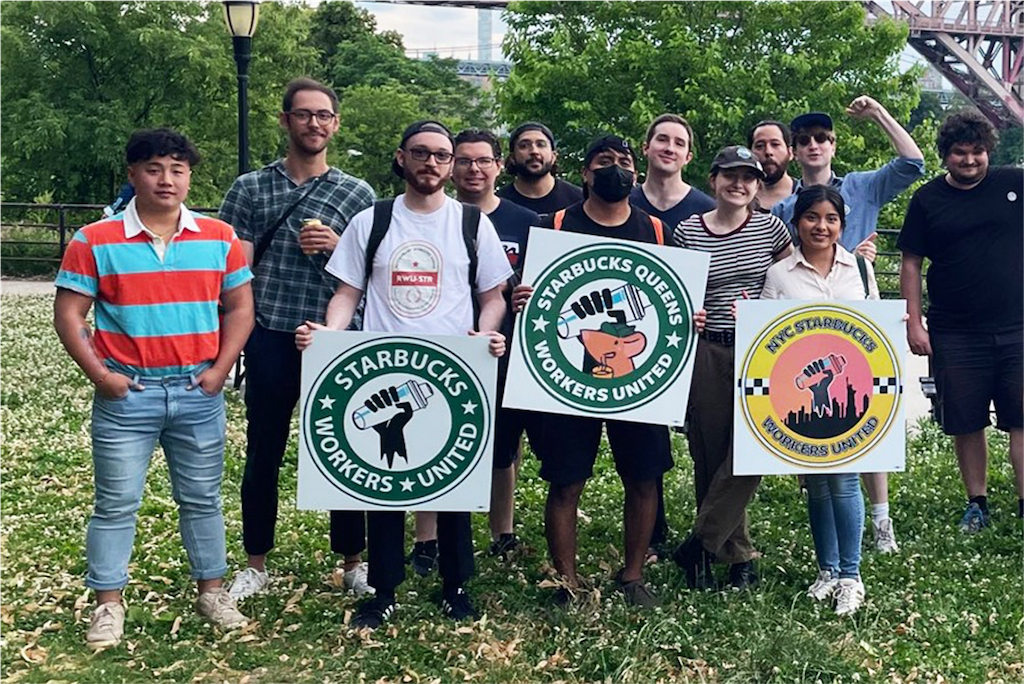 Workers fighting to unionize Starbucks have now won union elections at over 150 locations, filing at over 250 stores in 35 states across the country. But as the Starbucks unionization effort grows, management continually targets activists, leading to a slew of retaliatory firings. According to the Guardian, “Starbucks has fired over 20 union leaders around the US over the past several months as union organizing campaigns have spread across the country.”

Recently, the 31st Street/Ditmars Blvd Starbucks in Astoria, Queens won their union election 7 to 4, becoming the 6th unionized store in New York City. After this win, Starbucks illegally fired a key organizer at the location. Austin Locke worked at the Ditmars Blvd Starbucks location for 6 years prior to his firing on July 5th. He was publically active in helping to unionize his store with Starbucks Workers United (SWU) and is also a member of Restaurant Workers Union (RWU). In retaliation against his organizing efforts, Austin was targeted by Starbucks management and fired.

Austin has worked at Starbucks for six years. Over the past several months, Austin has been publicly active in the unionization effort at the 31st Street/Ditmars store in Astoria, Queens, New York City. He worked to unionize his store with Starbucks Workers United (SWU) and contributed to other efforts as a member of Restaurant Workers Union (RWU). As has been the case with other Starbucks union organizers across the country, Austin has been rewarded for his organizing activity with continuous harassment by management.

On June 6, Austin came down with flu-like symptoms and called out sick as a precaution to protect his coworkers. He tested negative for Covid and returned to work on June 8. The management sent him onto the floor to complete a Covid symptom check-in, where none of the iPads used for the check-in were functional.

That same day, a shift supervisor at Starbucks put his hands on Austin to stop him from walking into a room. Austin immediately reported this to HR and to the District Manager, Kristina Freeman. After the report was submitted, he was verbally attacked and sent home. The managers have repeatedly refused to release video footage of the incident.

On June 30, the 31st Street/Ditmars Starbucks won their union election. Scarcely five days later, Austin was fired. District Manager Freeman called 911, kicked out all customers, and had the police escort Austin out of the store in front of all his coworkers. The message could not have been clearer: organize for better pay and conditions and you will pay a steep price!

In their “Notice of Separation,” District Manager Freeman and Store Manager Nicole Gilbert justified the illegal action by charging Austin with “making a false claim of workplace violence,” concluding that “no contact” was made by the shift supervisor against Austin on June 8. They also accused him of “violating Starbucks Health & Safety standards”. These are lies.

We demand that Austin be reinstated with back pay and compensation for harassment and the illegal termination. We also demand that Starbucks release the video footage that allegedly shows “no contact” in the June 8 incident.

Austin’s struggle is every worker’s struggle! Everywhere and always, we support the working class against anti-union attacks!

If you would like to support Austin financially as he fights for reinstatement and full back pay, please donate to the GoFundMe here.