Regardless of who wins the election next week, the economy is tanking. Rather than recovery, the pandemic and coming recession promise more market volatility and more hardship for the working class. What do the most recent numbers tell us? 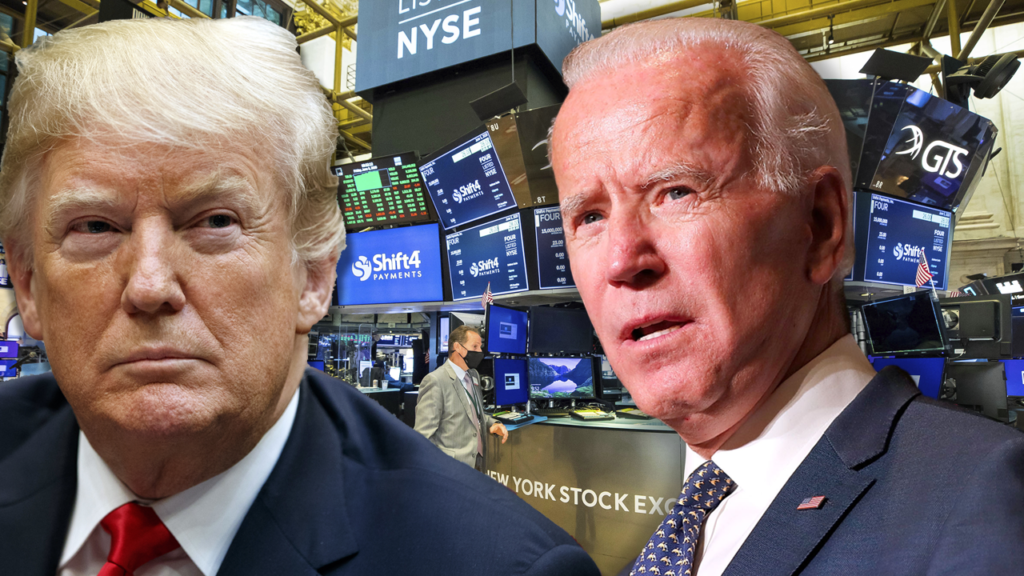 When it comes to the economy, numbers obviously matter. In recent days, important numbers have filled the mainstream news media. On October 28, they concerned the stock market. The next day, they were about gross domestic product (GDP).

What should we take from this news? For workers and the oppressed, the numbers don’t necessarily matter in the same way they do for the capitalists.

Donald Trump is like a trumpeter who can play only one note, the one that sounds like “look how great the stock market is doing.” As he told Congress in his last State of the Union address, “All those millions of people with 401(k)s and pensions are doing far better than they have ever done before with increases of 60, 70, 80, 90, and 100 percent and even more.” He’s been making the same pitch in his superspreader rallies during the pandemic, touting how his management of the economy is helping the workers he tries to appeal to.

Trump hasn’t said a word about the stock market this week, however.

On October 28, the U.S. stock market took a serious hit — as the various indices reveal. At the close of trading on the New York Stock Exchange, the Dow Jones Industrial average had fallen 943 points, a decline of 3.4 percent. On what was its third consecutive day of decline, the S&P 400 fell 3.5 percent. Analysts attribute this to finance capital’s concerns over the election and the uncertainty of a swift outcome, soaring coronavirus cases, and the nearly total abandonment of any hope that the politicians in Washington will act on any sort of fiscal stimulus.

European markets had done the same earlier in the day, suffering their worst single-day drop since late September, largely in response to announcements of new coronavirus-related lockdown measures in Germany and France that will have massive rippling effects through the continent’s economy.

So, is Trump correct? Is a robust, rising stock market good for the working class? As Reuters truthfully reported after the State of the Union, “While pensions and retirement funds were lifted by the rise in stock markets, the president has avoided talking about one key point about who really benefits when the market rallies: Most of the gains go to the small portion of Americans who are already rich.”

For example, Amazon founder and CEO Jeff Bezos has been the main recipient of his company’s stock price going up nearly 70 percent during the pandemic, helping him become the world’s first person worth $200 billion. And he’s just one of 643 billionaires in the United States whose fortunes, reports the Guardian, “have soared by an average of 29% since the start of the coronavirus pandemic, which has at the same time laid waste to tens of millions of jobs around the world.”

The income they accrue from stocks is not exactly from their own investments. Rather, it’s part of the surplus value workers create. Through those retirement and pension funds, the capitalists use our money to make investments that benefit them far more than they benefit us. It’s very convenient for the wealthy to have other people’s money at their fingertips to invest at a moment’s notice as they “play” the market and continue the process of expanding and accumulating capital. The markets also serve to concentrate wealth in the hands of a smaller and smaller segment of the ruling class, especially during crises (as Karl Marx explains in Book III of Capital).

These declines are not just the result of the virus, lack of stimulus, and election uncertainty. No doubt, they are factors and have paralyzed a significant portion of the world capitalist economy. But the unfolding crisis was already on the horizon before the pandemic began. In fact, the main institutions of global capitalism had already been forecasting a downturn (some even dared suggest a “recession”), and earlier this year, the World Trade Organization forecast a decrease of between 13 and 32 percent globally just this year.

The combination of capitalism’s inability to overcome the lingering effects of the global financial crisis that struck in 2008 and the paralysis the pandemic has wrought are combining to drive the markets batty. Soon enough, they are likely to become less volatile — but not in the way the ruling class would hope. Rather, the unfolding crisis will produce a steady stream of declines.

The bosses have every intention of recouping their losses, which is why austerity is likely on the way. Sure, they may inject some stimulus in the meanwhile, but it’s all aimed at laying the groundwork for making sure the global working class pays for the effects of the recession to come.

What hurts the capitalists gets pushed back on the great masses. That’s what you need to know about a plunge in the Dow.

And the announcement is hard to believe. “U.S. economic output grew at the fastest pace on record last quarter as businesses began to reopen and customers returned to stores,” reported the New York Times. “But the economy has climbed only partway out of its pandemic-induced hole, and progress is slowing.”

Specifically, U.S. gross domestic product grew 7.4 percent in the third quarter of this year. That works out to 33.1 percent on an annualized basis, and is “by far the biggest since reliable statistics began after World War II,” the Times added. But what does it really mean?

GDP measures an entire economy’s total output — a combination of total consumption, investment, government expenditures, and net exports. Bourgeois economists believe this measure — nominal GDP — approximates an entire economy’s income for a given period, and they use it to calculate per capita GDP, often cited when assessing people’s standard of living. You take the GDP, divide it by the country’s population, and you get a number. Then there’s real GDP, which tracks the total value of goods and services, calculating the quantities but using constant prices.

The bottom line is that when GDP rises, those same bourgeois economists — and the politicians they serve — claim everyone is better off. So, if that’s the case, all of us — workers and the bosses alike — ought to be celebrating the latest GDP news, right?

Wrong. Sometimes those same bourgeois economists tell the truth. The context this time is the massive hit the U.S. economy — and especially the working class in this country — has been taking for years, coupled with the hammer blow that began with the outbreak of the pandemic earlier this year. In 2020’s first quarter, GDP fell 1.3 percent. It plummeted by 9 percent in the second quarter, when the measure began to account for the full impact of widespread business closures and unemployment. As the Times put it, “[E]conomists said the third-quarter figures revealed less about the strength of the recovery than about the severity of the collapse that preceded it. … A big rebound was inevitable once the economy began to reopen.”

That reopening was rammed through by the most science-denying capitalists and the politicians who serve their interests — the same politicians who have refused for months to provide additional financial relief for U.S. workers and families that are falling into poverty at an unprecedented rate. The inevitability of “a big rebound” is reflected in what are, for workers, just a bunch of numbers. They don’t say a thing about our standard of living. They don’t account for evictions, lines at food pantries, and jobs lost forever.

This is no recovery. How could it be? Already, it’s “losing steam,” as the Times reports. “Industrial production fell in September and job growth has cooled, even as a growing list of major corporations have announced new rounds of large-scale layoffs and furloughs.” Most economists expect the slowdown to worsen in the final three months of the year as virus cases rise and federal aid to households and businesses fades.”

Last week, there were 732,000 new claims for unemployment benefits filed across the United States. There’s your “recovery.” So when the capitalists and their politician lackeys tell you that “we’re all in this together” — as they so often cynically say — keep in mind that they are the ones who produced this crisis. What they really mean is don’t challenge their rule, work harder even if for less, and get ready to maintain our profits and exploitation. They’re preparing the next assault on working people across the world. We should expect nothing less.