Stopgaps Won’t Stop the Crisis — the Capitalists Must Pay

On Thursday, September 30, Joe Biden postponed the government shutdown. A week later, the debt ceiling was raised by $480 billion. Capitalist crisis is ultimately inevitable unless we fight back with working-class methods. 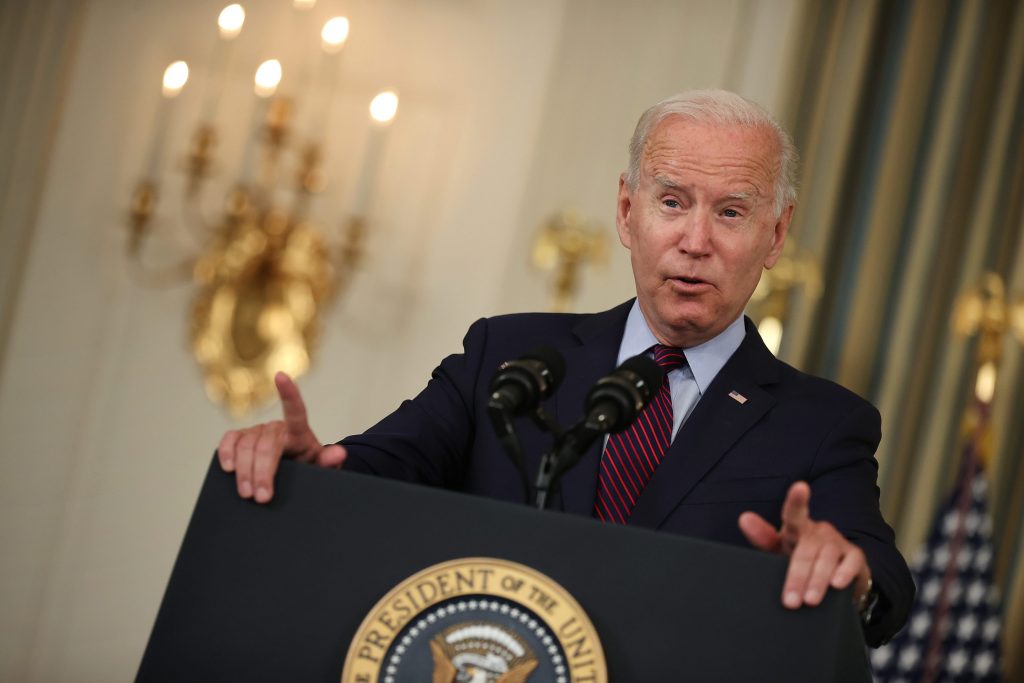 On Thursday September 30, Joe Biden signed a stopgap funding bill to postpone a government shutdown by extending funding until at least December 3, 2021. The stopgap bill, in addition to keeping the government open, is also supposed to grant funds to help process and resettle Afghan refugees, and provide disaster relief for people across the country who have been impacted by storms and wildfires throughout the summer. In his speech, Biden highlighted the bipartisan collaboration that allowed the bill to pass. He didn’t, however, mention how the Extending Government Funding and Delivering Emergency Assistance Act only “provides fiscal year 2022 appropriations to Federal agencies through December 3,” and doesn’t guarantee more money for social spending.

Treasury Secretary Janet Yellen has been warning of the looming and increasingly likely prospect that the federal government will run out of money by October 18 unless Congress raises the debt ceiling, increasing the amount of money that the United States can borrow to pay its bills. The federal debt had been set at $28.4 trillion, but a current debt of $28.43 trillion made an increase imperative (these increases were routine and bipartisan for decades) — which is why many Democrats and the White House Council of Economic Advisers were urging Congress to raise the borrowing limit. On Thursday, October 7, Senator Chuck Schumer announced an agreement which would increase the borrowing limit by $480 billion. This will keep the government from defaulting on its credit obligations and, ostensibly, keep the government afloat until December 3, but does not eliminate all risks associated with government spending, mandatory payments, and interest on debt and payments to U.S. bondholders. All of this could potentially have drastic effects on the working class, which relies on many government-funded programs.

The United States has never defaulted on its loans. Doing so would force the imposition of austerity measures on U.S. workers that go far beyond those we’ve seen during short-term government shutdowns, and would be more like those imperialism is continually forcing upon other countries in the Global South. Some potential consequences of defaulting could include 15 million elderly people not receiving or having delayed Social Security payments, 30 million families not getting Child Tax Credit payments, postal workers not getting paychecks, eliminating FEMA funding for wildfire and disaster relief, and getting rid of public health effort funding as the pandemic continues on and new variants emerge. In other words, the United States would end up having to cut social spending to pay its debt.

The debt ceiling debate lays bare the irrationality of the capitalist mode of production, of debt, and of all major economic decisions being made by a small handful of capitalists. Biden invited Bank of America CEO Brian Moynihan, JPMorgan Chase CEO Jamie Dimon, and chief executives of Citibank, the Nasdaq Composite index, Intel and AARP to a meeting on October 6 to discuss “the devastating consequences of failing to lift the debt ceiling.” The next day, October 7, Schumer and McConnell announced that they had reached an agreement on increasing the debt ceiling. Those who are most impacted by the effects of the government defaulting on its credit have no input into how money is allocated or spent, but will also be the first to suffer when the coffers run dry.

Raising the debt ceiling has nothing to do with authorizing new spending measures. People are dying as their illegal basement apartments flood due to capitalist-induced climate catastrophe in New York City, one in six children are experiencing food insecurity across the country, and classrooms that are not equipped with appropriate ventilation mechanisms or distancing are aiding and abetting the spread of Covid-19 among largely unvaccinated children. Meanwhile, the Democrats have been waffling on the amount they are willing to dedicate for social spending, all while the Democrat-led Congress increases the military budget by $24 billion, because there is always more money for the expansion of military imperialism.

A government shutdown would halt the provision of nonessential federal services until new funding legislation is passed and signed into effect. Each federal agency has its own shutdown plan dictating whether its activities can continue or whether they will have to lay off workers. However, as previous shutdowns have shown,  many workers at governmental agencies would be laid off. Workers at agencies deemed essential such as the Centers for Disease Prevention and Control would have to continue to work without pay. Because of course, during a pandemic, public health and research workers should continue to work without pay.

In a virtual meeting on Monday, October 4 with progressive Democrats, Biden lowered his proposed $3.5 trillion allocation for the social safety net legislation to a range of $1.9 trillion to $2.2 trillion. Representative Pramila Jayapal advocated for a number between $2.5 trillion to $2.9 trillion, saying that even $3 trillion was a major compromise from what liberal Democrats had wanted. Moderate Democrats are complaining that these figures are too high. Some of the benefits that this bill would provide include expansion of Medicare, enhancements to Obamacare subsidies, providing money to assist with childcare, and establishing universal pre-K and two free years of community college. These measures would be financed by raising taxes on individuals making about $400,000 in taxable income and married couples making more than $450,000 annually. Even among other progressive Democrats, the amount of money that would be spent on critical social safety net programs is being lowered. Contrary to their rhetoric, even the progressives govern not on the behalf of workers who require these programs to survive, but on behalf of capitalists and their profitability.

Modest tax increases on the wealthy are not enough to provide the kind of comprehensive social support required to help the working class and oppressed who have been hardest hit throughout the pandemic. AOC’s plan to tax the rich, which actually just calls for returning to Barack Obama’s tax levels, is not radical. Raising the debt ceiling and taking on more debt will put only slightly more money into woefully inadequate programs. It will not fix the systemic bullet holes the Democrats want to cover with band-aids. We need a massive redistribution of wealth, acquired through expropriation of capitalists, that will put money in the hands of working people to truly fight the pandemic and the simultaneous environmental and economic crises.

Furthermore, these essential government programs are not a guarantee — there’s still a large possibility that the government will shut down, and that not only will new programs get scrapped, but the existing (insufficient) programs will also cease to exist. History has shown us that crises in capitalism are cyclical. At times of economic crisis, it is always the working class that has to pay. Indeed, one only needs to look at the 2008 crisis to see how the project of restoring capitalist institutions is a bipartisan project. While millions of workers, both in the U.S. and across the world, lost their jobs and had their homes repossessed, the state put its strength behind the capitalists, bailing out big banks to ensure that capitalism could continue to function like normal. Now, as the Biden administration attempts to re-legitimize U.S. institutions and rehabilitate the profitability of U.S. corporations after the Trump years, it is throwing some crumbs to the masses in its attempts to paint itself as a friend of the working class.

But this administration, as all others before it, is fundamentally incapable of providing any real relief to the working class and oppressed. If we wish to win any meaningful reforms in the short term, we must organize independently of the capitalist parties, on the streets and in our workplaces, where we are most powerful, to force the capitalists to pay for the crisis they have created.