Kellogg claims, in ad after ad, to care about kids and their families. But the company’s actions show it couldn’t care less — just like capitalism as a system does not care about working families. 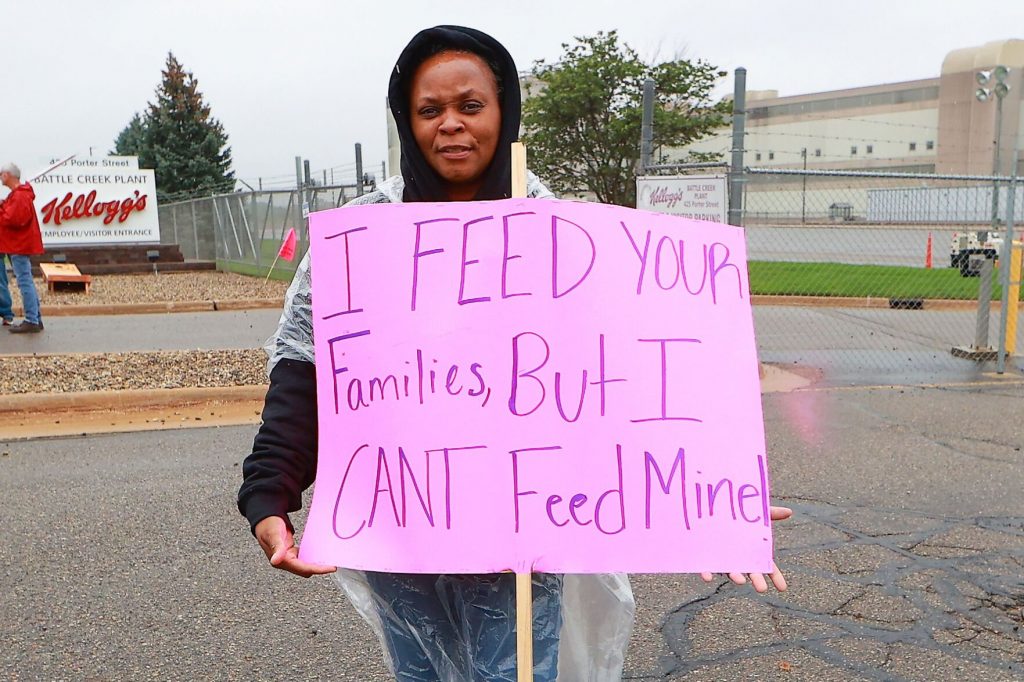 For about a week now, workers at four Kellogg Company facilities — members of the Bakery, Confectionery, Tobacco Workers, and Grain Millers’ International Union (BCTGM) — have been on strike against the company’s plans to cut wages and benefits and eliminate jobs by moving them to Mexico and Canada. Workers are also striking against a two-tier wage system used to divide workers by forcing newer hires and workers with greater seniority, working side by side, to accept vastly different wages and benefits. The company’s contract proposal keeps this system in place.

The unionists on strike today worked throughout the pandemic while the company continued to rake in record profits, even paying executives million-dollar bonuses while they worked from home. Left Voice has been on the ground covering the strike, and workers have described the abysmal working conditions they face.

One worker, who lives an hour away from the facility, reported that after a sixteen-hour shift, they had to choose between staying at a hotel to be at work on time the next day and returning home to take care of their sick relative. Another worker reported working for six weeks straight, 80-85 hours every week, without a single day off. He travels over an hour and a half in his commute from work and often the managers would let him know at the last minute that he would have to stay at work for another 4-8 hours.

Another long-time employee with more than 20-years’ seniority explained that she can no longer tolerate working the long hours because she has a young daughter and wants to be able to spend more time with her as she grows up. Several workers highlighted how their long work hours affect their relationships with their families and loved ones. Another expressed concern that the long hours also pose a risk to the community, forcing workers to drive home while physically and mentally exhausted.

More recently, as the strike has progressed, workers have been raising the company’s cuts to their health insurance. The partner of one striking worker who herself worked at Kellogg but left because of the working conditions, highlighted the contradictory nature of cutting workers’ health insurance during a pandemic.

“What is someone supposed to do if they have diabetes and need to pay for insulin?” she asked. “Or have some other type of illness? Kellogg says it cares about workers and their families and then does this?”

Kellogg Pretends to Care About Families

A common theme emerges when speaking with Kellogg workers: the toll their jobs take on their relationships with loved ones. This reality stands in stark contrast to how Kellogg presents itself to the public in its advertisements, where it claims to foster such relationships through its products. Take its ad for Frosted Flakes, which shows a family huddling with Tony the Tiger to play football in the living room. After the game, the family meets around the table to enjoy a bowl of cereal together. A Rice Krispies ad has a mother lovingly telling her daughter that she is “an awesome big sis.” The company even brags that its cereals will “help feed their potential” in an ad for Frosted Mini-Wheats focused on children and their mental development.

Kellogg joins the long list of companies that try to pull on the public’s heartstrings as a way to increase sales and profits. These commercials might be more touching if the working conditions Kellogg and other companies impose on their workers weren’t destroying the very relationships they claim to foster.

But the truth is that Kellogg has been forcing its employees to work 80 or more hours per week throughout the pandemic. Often, managers inform workers minutes before their shifts end that they will have to stay for four to eight hours of overtime. A 16-hour shift leaves only eight hours in the day — not enough time to get home and get a full night’s sleep, much less eat or spend time with loved ones. And now the company is cutting workers’ healthcare, directly threatening their well being. These actions inherently destroy families and harm the health of children, disconnecting them from their parents. If Kellogg “cares about families,” it should begin with the families of its employees.

Every conversation with Kellogg workers on the picket lines makes it abundantly clear that the executives of these large food companies couldn’t care less about workers and their families — or any other families and children. Their focus is on profits, which they seek to maximize by continuing to exploit workers and refusing to give them fair contracts.

On the one hand, the bosses promote the idea that they “provide jobs” so workers can “support their families” and take care of their loved ones. On the other hand, they aim to drive down wages, push longer and longer working hours, threaten to cut jobs, slash healthcare benefits, and divide workers — all as part of their quest to increase profits. The truth is that capitalists see the family only as a unit of the social reproduction necessary to exploit workers’ labor power each and every day.

As Josefina Martinez explains, discussing how the profit motive and labor exploitation affect social relationships, “Today’s society is based on the family, but at the same time breaks it apart; it makes the conditions for its existence impossible. This explosive contradiction has a profound impact on the conditions in which working women and the entire working class live and struggle.”

Because capitalism at once needs and tries to promote the “family” as a means by which to reproduce the labor force through unpaid labor in the home, the capitalists claim to care about creating and supporting an environment in which each worker can have a better life for those they love. But the exact conditions the bosses create under capitalism leads to the destruction of any such possibility. How is anyone who is forced to work 85 hours per week supposed to be able to spend time with their loved ones? Or anyone who gets sick and ends up in the hospital because cuts to health insurance made life-saving medication unaffordable?

Workers across the country are seeing this capitalist hypocrisy and standing up against it. There is an increasing uptick in strikes throughout the United States as workers reject growing exploitation under capitalism: 10,000 John Deere workers are on strike; 60,000 film and television industry workers — members of the International Alliance of Theatrical Stage Employees (IATSE) union — voted, with 98 percent in favor, to authorize a strike and now may reject a pitiful tentative agreement negotiated by their union leadership; healthcare workers in Massachusetts have been on strike for seven months now against poor working conditions; and healthcare workers in Buffalo, NY are striking against the same conditions.

Exploitation under capitalism extends beyond any one workplace. It is built into the capitalist system itself. It is clear that many workers are fed up with a capitalist system that does not care about them or their loved ones, and growing numbers are fighting for something better. For these struggles to succeed, for workers to win all of what we deserve, it is essential that we fight to connect these labor struggles and extend them to other workplaces. Let’s direct the rage of the exploited Kellogg workers and others beyond just improving working conditions, but toward destroying a system that cannot be reformed.