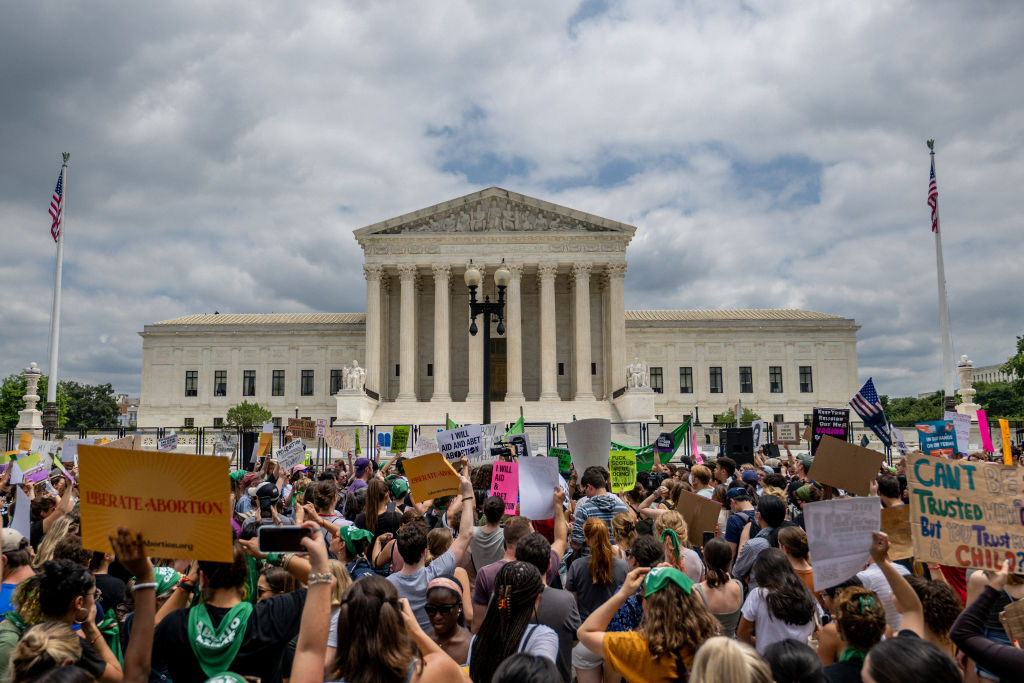 Almost two months after Samuel Alito’s draft decision was leaked to the press, the Supreme Court finally released the decision to overturn Roe v. Wade, automatically making abortion illegal or severely restricted in at least nine states. With many more states having passed or seeking to pass similar laws, abortion is likely to be criminalized in more than half of U.S. states. Just as when the draft was leaked, people across the country took to the streets to reject an undemocratic SCOTUS decision that takes all of us half a century into the past.

So far, the biggest protests have taken place in Democratic-controlled states where abortion will remain legal. One of the biggest was in New York City, where a crowd of 20,000 marched from Washington Square Park to Times Square and Bryant Park, bringing the busy traffic of the city to a complete halt as they passed.

Chicago also marched by the thousands, shutting down downtown and showing the will to fight back. People gathered at Federal Plaza and marched down Dearborn Street and through the busiest streets of the city. Just as in Manhattan, passersby joined the march and drivers honked in solidarity.

Portland too saw big marches descend on the city, starting from several points like Lownsdale Square Park, Tom McCall Waterfront Park, and Pioneer Courthouse Square. The protests later merged to march to the Justice Center. Other protests took place across Oregan, in cities like Eugene and Salem.

A few thousand people also flocked to the Capitol Building in Denver, Colorado, despite the rain. The crowd marched down 16th Street, chanting and holding banners. People shouted in solidarity from buildings and restaurant employees stood outside their workplaces to show support.

In various cities across California, thousands of people took to the streets to protest. There were rallies and marches in San Diego, West Hollywood, San Luis Obispo, San José, among others.

Los Angeles saw a particularly big and emboldened crowd that gathered at Pershing Square. A section of the protest made it to the 110 freeway and blocked traffic. The repression by police was particularly violent during the demonstrations. Helicopters buzzed overhead and police clubbed protesters and journalists as they documented the protests. By 9 p.m. LAPD declared the assembly unlawful and violently dispersed the remaining protesters.

Red states also saw their share of protests, showing once more that people all over the country support abortion and are ready to defend it. In Dallas, Texas; Albuquerque, New Mexico; and Atlanta, folks marched and rallied to reject the overturn of Roe v. Wade and the horrific bans being passed in their states.

Against all odds, a surprisingly big crowd flocked to Utah’s State Capitol, located in Salt Lake City. Utah is one of the several states that has implemented a so-called “trigger ban” that immediately banned abortion in nearly all circumstances after the SCOTUS decision dropped.

One of the worst moments of the day was seen in Phoenix, Arizona, where thousands of protesters gathered in front of the Capitol Building, and the police shot tear gas from the windows to disperse the crowd.

But it was not the only one. Police beat protesters in Greenville, South Carolina and in many more states. More and more images and videos of police brutality against protesters defending abortion are coming to the surface.

Just as the police beat protesters fighting for the basic right to abortion healthcare, they will be the ones to brutally enforce the new bans cropping up in states across the country — just as they did fifty years ago before Roe. Once again the police showed that their role is to enforce the oppressive laws of this capitalist system, violating the rights and bodily autonomy of people across the country.

Despite the repression and the weight of one of the most significant rollback of rights in decades, the protests showed that there is plenty of energy and anger to fight back and to demand free, safe, legal abortion, on demand and without apology. Contradictorily, many of the decision day marches and rallies were called or led by big NGOs tied to the Democratic Party who did little to nothing during the last two months to prevent Roe v. Wade from being overturned. They would rather co-opt and pacify the rage at the SCOTUS decision and funnel it into votes for the Democrats, who have shown that they will do nothing to protect abortion rights.

The march in NYC shows a different way. It was called by a coalition of socialist groups, activists, and unions — including several of the new Starbucks unions shaking up the labor movement across the country. It was convened without cops. Unlike the failed Women’s March May 3rd rally, not a single capitalist politician — who let this decision be overturned and want to pacify our rage — was allowed to speak. Learning from the endless empty promises by the Democrats for the last fifty years, thousands of people took their anger to the streets, an encouraging sign of the willingness to build the type of independent mass movement necessary to defend the right to an abortion. But much more is necessary. To be successful, such a movement —  built in the streets and in our workplaces and communities — must expand across the country, linking the states where abortion will remain legal to those where abortion has already been or will be banned. Such a movement could shut down the country’s largest economic centers like New York City, or keep abortion clinics open in places like Mississippi. Such a movement could finally win free, legal, and safe abortion on demand.