Following Texas’s example, a wave of new copycat bills restricting abortion access is already taking a serious toll on the health and wellbeing of pregnant people across the country. 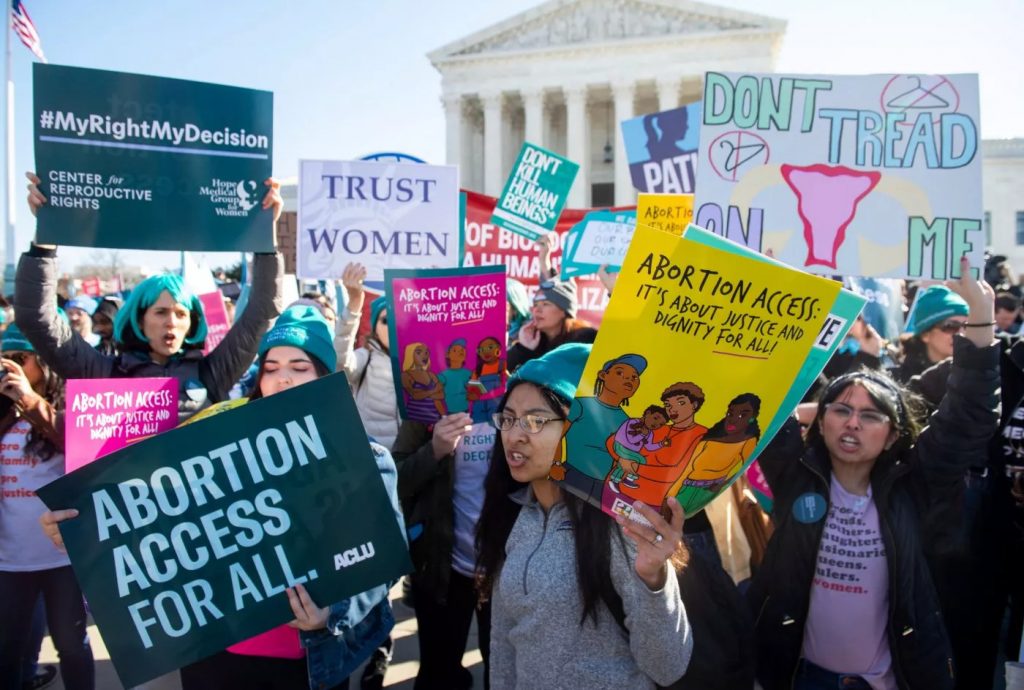 Maddie is a 21 year-old college student in Texas. She learned she was pregnant in December, and knew she wasn’t ready to raise a kid. She wanted an abortion, but she was past 6 weeks pregant. Maddie’s dad drove her to Mississippi overnight for a first appointment. The provider in Mississippi scheduled the procedure for the next week, because of the state’s mandatory waiting period, and Maddie and her father drove back to Texas. A week later, she flew with her mom to Mississippi for the abortion.

Ana and Scott were engaged when Ana realized she was pregnant. Though it wasn’t planned, the couple was excited to have a baby. They moved up the wedding in preparation for the baby’s arrival. Ana was in her wedding dress when her water broke. She was only 19 weeks pregnant. The couple rushed to the ER. There the doctors informed her— there was no way the fetus would survive. If she didn’t terminate right away she was at high risk of going septic or bleeding out.  But the doctors at the hospital couldn’t perform abortion: terminations to save the life of the pregnant person are only allowed in “severe” medical emergencies.  So, Ana and Scott had to decide: would they drive through the Central Texas desert to New Mexico, where there’s no waiting period? Or should they fly to Oklahoma? They chose the plane. Ana and her OB made a plan in case she went into labor while in the air. Though she eventually aborted the fetus, the ordeal cost thousands of dollars, and was deeply traumatizing. But Ana thinks she’s lucky.

“Somebody is going to die eventually,” she said.

As these stories show, the abortion law passed in Texas, which effectively bans abortions six weeks after six weeks of pregnancy, is already having devastating effects. The law allows anyone, regardless of where they reside, to sue abortion providers and anyone who provides financial assistance or transport to a person obtaining an abortion after six weeks. Within a month of the law going into effect, abortion rates in Texas dropped by 60 percent. Maddie and Ana’s stories highlight the class nature of these restrictions: now, abortions are available only to those with the financial means to overcome these barriers. For every person who successfully pursues an abortion, there are many more who can’t afford to travel, or to take time off work.

And it’s not just Texas. Abortion rights are under attack across the United States.

After Texas passed S.B. 8 in September last year, over 15 states are pushing copycat bills to limit abortion rights. Yesterday Oklahoma’s House of Representatives passed a near-total abortion ban, copying Texas’ $10,000 fine for anyone who gets an abortion unless the life of the pregant person is in danger. These kinds of laws would have been unthinkable less than a decade ago. Now, the Supreme Court has also heard oral arguments for Dobbs vs. Mississippi last December, suggesting that Roe v. Wade is in imminent danger of being severely restricted, if not overturned outright, opening the floodgates for states to pass whatever onerous restrictions they please.

Last year, statehouse passed at least 106 abortion restrictions, making it the worst year for reproductive rights in U.S. history — until now.  2022 is giving 2021 a run for it’s money, with right wing legislators on the offensive against abortion rights. New, oppressive laws are cropping up in emboldened state legislatures almost daily, even as the horrendous consequences of existing laws are starting to manifest.

“Heartbill bills”, which have been introduced in numerous states, ban abortion six weeks after a missed period, when most people don’t know they’re pregnant yet. Other states have introduced bills that would ban abortions after 15 weeks.

Here’s a brief roundup of the most draconian laws passed or proposed in states across the country.

Yesterday, the Oklahoma House voted to passed a near-total ban on abortion. It bars any doctor from performing an abortion unless it is to “save the life” of the pregnant person. As in Texas, the law is to be enforced by private citizens for a $10,000 bounty. An emergency clause in the law would put the law into effect as soon as it is signed.

This is especially terrible because Oklahoma became a crucial and necessary site for Texans like Ana to get abortions.

Idaho passed a Texas copycat law last week. The main difference between this bill and S.B. 8 is that it allows a parent or family member of the fetus to sue anyone who “aids and abets” someone seeking an abortion, not for $10,000exas, but $20,000. As Kylie Cheung explains, this will be used by rapists to punish victims. While the bill does make an exception for rape — as opposed to the Texas law, which does not — such an exception only counts if pregnant person has filed a police report. Notably, only a vanishing small percentage of people who experience sexual assault go to the police; after all, the police are notoriously sexist, and known to rarely investigate cases of sexual assault. Fewer than 1% of assaults result in convictions. Thus, Cheung writes, “Idaho’s ban allows rapists and their family members to essentially profit off their victim’s pregnancy, giving them the right to sue those who “aid and abet” their victim in having an abortion—this, of course, can include their victims’ family members, if they helped them have an abortion.”

While they haven’t all passed yet, Missouri’s slate of anti-abortion laws are perhaps the most draconian measures proposed to date.  Lawmakers are pushing the envelope with legislation intended to expand abortion restrictions even outside of the state. This law, proposed by State Representative Mary Elizabeth Coleman, would make it illegal to “aid or abet” abortions for residents of Missouri, even if they are performed in other states. As PBS highlights, “While some legal experts doubt that Coleman’s proposal is constitutional, they also worry that the Supreme Court might refuse to intervene to stop it — just as it did with the Texas law.”

Further, Missouri is also proposing an ectopic pregnancy bill, which would ban abortions on prgenancies that are not viable and could be life threatening. Ectopic pregnancy occurs when the fertilized egg implants outside of the uterus.

All of this comes after a “trigger law” was passed in 2019, outlawing most abortions if Roe v. Wade is overturned.

A Tennessee bill that is currently being considered would bar abortions after pulsating fetal cardiac cells are detected (a “heartbeat” bill) and deputizes anyone to enforce the law. There is no exception for rape or incest.

Representative Rebecca Alexander said the bill would allow people to sue anyone who helps someone get an abortion, “regardless of any standing they have in the case.” When asked whether the family members of a rapist would be allowed to sue, Alexander replied, “My assumption is that they could, other than the rapist.”

Fight for Abortion Rights in the Streets

As these laws highlight, it’s urgent to build a mass movement for abortion rights.

There is no emergency brake. Rather, these laws are spreading like wildfire. The Republicans won’t stop in Texas. The Supreme Court, where nine unelected judges get to decide about the bodies and lives of million of people, isn’t going to stop these restrictions to abortion. And the Democrats, as they have shown, won’t help. They \will surely use this to push to vote for them in the upcoming midterm elections, in order to “Save Roe”. Yet, the Democrats have been doing nothing to fight for abortion rights. The Democratic Party held a supermajority early in Obama’s term that could have been used to pass abortion legislation. They hold both houses of Congress and the White House now.
The abortion movements in Ireland, Argentina and across Latin America have showed us the way — the only way to save abortion rights is to fight, in the streets, without any faith in capitalist politicians who use basic rights as a bargaining chip. We need actions like the student walkouts and that of workers at Disney protesting Florida’s draconian “Don’t Say Gay” bill. And we need a mass movement that fights not only to defend Roe v. Wade, but for free, safe and legal abortions, for trans rights, and for a free, public healthcare system.