The “Lesser Evil” Is Here, and Kids Are Still in Cages

The Biden administration’s promises of a softened stance on immigration are proving hollow, as the Department of Health and Human Services reopens a formerly shuttered detention camp for unaccompanied migrant children 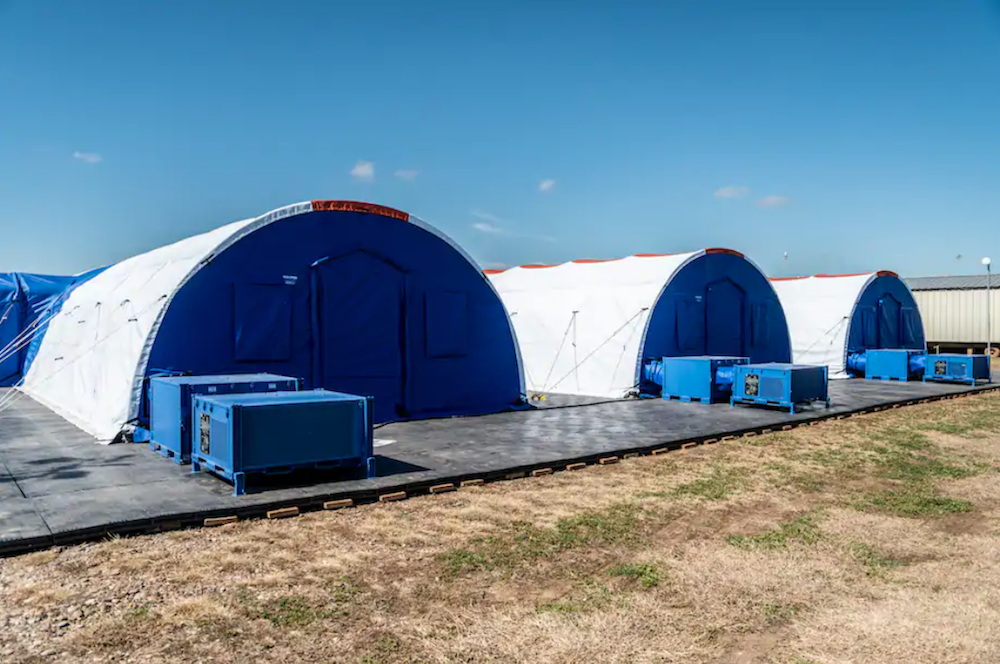 After spending months on the campaign shedding crocodile tears for the children kept in cages by the Trump administration, President Biden has just opened his very own immigration detention camp for children. On Monday, dozens of children aged 13 to 17 boarded buses bound for a repurposed oil field workers’ camp in Carrizo Springs, Texas. The facility housed unaccompanied minors for a month in 2019 before being shuttered by the Trump administration, but is now being reopened by Biden. According to the Department of Health and Human Services (HHS), the reopening is necessary to deal with overcrowding at other facilities that house underage migrants.

HHS has said its “goal” is to keep unaccompanied migrant minors in this camp, or others like it, for about 30 days, on top of the two-week quarantine they undergo at the Office of Refugee Resettlement (ORR). But in 2020 the actual length of interment for migrant children averaged 102 days. That amounts to over three months of separation, on average, from family and contacts in the United States.

The concentration camp is run by a private religious nonprofit that contracts with HHS. “Contractors who run these shelters on behalf of ORR make a per head, per diem fee off the child. … So the incentive to release children quickly is very low,” explained Hope Freye, the director of Project Lifeline, a nonprofit that advocates for migrant children. These detention centers are run with little oversight or transparency, which makes it harder for families and advocates to locate and communicate with the children. Detention centers are infamously unsafe for migrants — trans women have died from the unsafe conditions, and migrant women in Georgia were given forced hysterectomies.

Repulsively, the HHS is trying to present this children’s prison in a positive light; a spokesman stressed how much better facilities at Carrizo are than the infamous “chain link partitions” of the McAllen Processing Center, pointing to the daily $775 cost of housing a child there. This is a distinction that papers over the fundamental cruelty at the heart of the situation; to quibble over whether kids are prisoners in “camps,” “cages,” or “the Cadillac of migrant child centers” is ultimately a distraction meant to preserve the friendly public profile the Biden administration wishes to project. While some of the Trump administration’s more obvious abuses and openly vitriolic rhetoric may have been scaled back, the daily human rights abuses of our immigration system continue apace, barely hidden beneath layers of red tape and fleets of unmarked vans. The Biden administration sees no contradiction between condemning the excesses of the Trump immigration regime while also opening new prisonlike detention centers for children. Biden was instrumental in maintaining and expanding President Obama’s enforcement/deportation apparatus, whose appalling conditions now seem to have been forgotten, so it comes as little surprise that he would do so again. Despite his hand-wringing about kids in cages when it was convenient to distinguish him from Trump, he has never broken even slightly with the abhorrent logic of criminalizing and deporting migrants.

The Carrizo Springs camp is a perfect expression of what the Biden administration offers — a friendlier face for the same repugnant policy agenda. Much of the media attention to this new facility has uncritically swallowed the administration’s line on how “humane” the Carrizo Springs camp is, fixating on small cosmetic contrasts between Carrizo and the garish camps that garnered outrage under Trump. They note, apparently without irony, the absurd “Bienvenidos” banner hung over a tent where legal services are being offered to detained children. Little attention is given to the fact that the fundamental injustice of the policy persists, or the fact that many of Trump’s immigration policies were pioneered by his predecessor, Obama. Internment camps that keep minors separated from their families for months on end are a moral monstrosity, no matter how polished and inviting the Biden administration makes them.

While immigration advocates have called for such detentions to be immediately halted because of Covid, the Carrizo reopening demonstrates how a crisis can always be used to expand the reach of the security state. Nearly all unaccompanied underage migrants are on their way to meet family in the U.S., yet the Biden administration will never take the obvious step of simply allowing them to do so, or facilitating this process without a cruel and unnecessary stay in a detention center. The government so prioritizes punishing and deterring “illegal” immigration that it would sooner throw thousands of children in tent cities and trailers than simply send them to the families who are waiting for them. The pretext of Covid precautions as a justification for reopening the camp is entirely cynical: the best way to keep children safe from Covid would be to not keep them in overcrowded internment camps, and the simplest way to reduce crowding is, of course, to empty and close the camps. Incredibly, HHS is attempting to cast the reopening of the very facilities that were considered an unconscionable abuse of human rights under Trump as a humane precaution. This is what the Democrats stand for: a friendly, palatable expansion of child prisons, with inviting “Bienvenidos” banners waving above the entrances. Those moralizing philistines who loudly condemned Trump’s prison camps, but now seek to normalize those run by Biden, would distract us from the fact of oppression by scrutinizing its form.

We should not be taken in by the Biden administration’s self-congratulatory language, or by the media’s eagerness to wash away the supposedly aberrant nature of the Trump years. For the multiracial working class and oppressed, this is no lesser evil — this is only more evil with “kinder” words. Migrants’ rights are still being casually disregarded en masse, and we should not temper our criticism because such abuses are being carried out “more humanely,” or by an oppressor-in-chief who is less outspokenly bigoted. Nothing short of an end to the violence of borders and migration restrictions constitutes true justice for immigrants. This is just another example of the way Biden will govern, like Democrats and other representatives of the ruling class before him — long on rhetoric but short on justice.