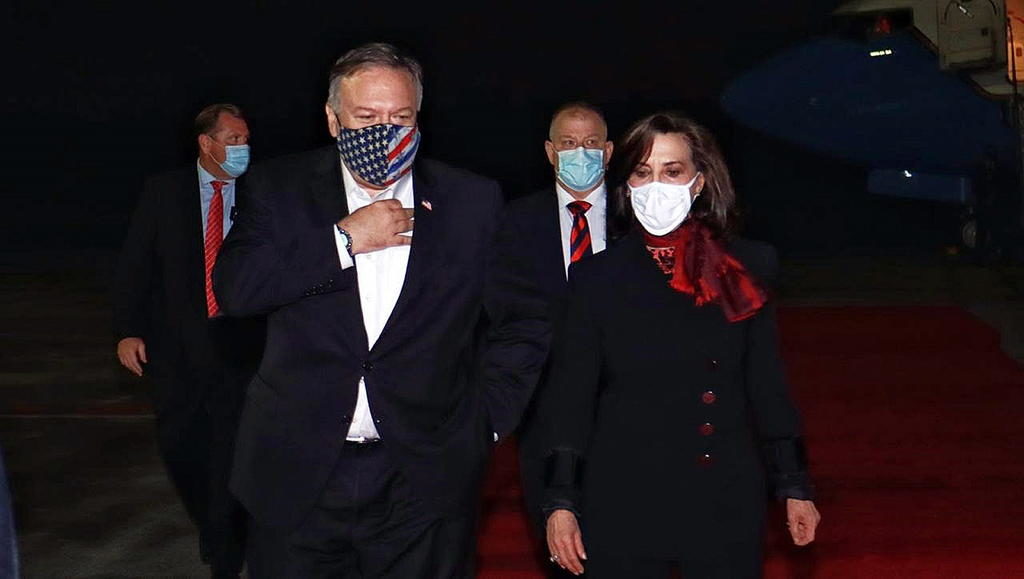 The new U.S. announcements come as part of a tour by Secretary of State Mike Pompeo last week of four South American countries, including Brazil, Colombia, and Guyana, to put pressure on the Maduro government.

Pompeo said on Monday that the new sanctions against Iran’s defense ministry and against Nicolás Maduro are for contributing to the violation of the arms embargo imposed on Tehran, warning that anyone who “violates the UN embargo on Iran risks being sanctioned.”

Pompeo added, “For nearly two years, corrupt Tehran officials have worked with Venezuela’s illegitimate regime to circumvent the U.N. arms embargo. Our actions today are a warning that should be heard around the world.” Maduro has long been sanctioned by the United States, though the sanction is focused more heavily on Iran.

On Saturday, the United States announced the imposition of sanctions using the mechanism known as “snapback,” included in the 2015 nuclear agreement that Washington abandoned a few years ago. This action took place even though the UN Security Council refused to extend the embargo on Tehran.

In addition, as reported by some media outlets such as EFE, “the measure goes hand in hand with the effort of U.S. President Donald Trump to limit Iranian regional influence and comes a week after agreements negotiated by Washington for the United Arab Emirates and Bahrain to normalize ties with Israel.”

After learning of Washington’s decision, Germany, France, and the United Kingdom have warned that the United States’ announcement to reimpose the sanctions has no “legal effect” because the United States withdrew from the nuclear agreement in 2018. Russia, one of the other signatories of the agreement and Iran’s main ally on the international scene, has also rejected this step taken by Washington. For his part, UN  secretary-general António Guterres indicated that the body will not take measures against Iran in the line that the United States has requested because there is no consensus in the UN Security Council.

Meanwhile, the sanctioning of Venezuelan individuals announced Tuesday continues the U.S. policy of squeezing Maduro’s government. This comes as negotiations are underway between the Venezuelan government and sectors of the country’s opposition, as represented by Henrique Capriles (Primero Justicia) and Stalin González (Un Nuevo Tiempo), with the participation of European Union.

The newly sanctioned individuals are not from the government or from the upper echelon of Chavismo. They are members of the opposition who sought to take control of right-wing parties through the Supreme Court of Justice. They have thus been sanctioned for “placing control of Venezuela’s opposition parties in the hands of politicians affiliated with the Nicolas Maduro regime, undermining any credible opposition to challenge that regime.” On the list are Miguel Ponente, Guillermo Luces, Bernabé Gutiérrez, and Chaim Bucaran. The United States also imposed sanctions on Williams Benavides, the leader of the Tupamaro movement, which supports Maduro.

Tuesday’s measure freezes the U.S. assets of those on the blacklist and generally prohibits Americans from negotiating with them. These are more symbolic sanctions, since they do not have an impact beyond putting more pressure on and shoring up the opposition sector led by Juan Guaidó and other leaders who are calling for the December elections to be ignored.

More than 20 days ago, the Venezuelan political scene shifted after the announcement of a pardon for 110 opposition leaders, after a negotiation between the government with Capriles and González with the mediation of the Turkish government and which, according to the media, are agreements that would have the approval of the European Union.

In the ranks of the opposition, the political chessboard also shows open divisions, with bitter confrontations and harsh accusations on social media almost daily. One of the main divisions is between those who are calling for the disregard and boycott of the upcoming elections (Guaidó and a group of opposition parties) and those who are still considering participating in the parliamentary elections (Capriles, González) if they can count on the observers of the European Union. There are also divisions among the sector calling for boycotts, as is the case between Guaidó and María Corina Machado, who openly questions the role played by the former throughout 2019 when his roadmap failed: Maduro’s exit.

Many variables are still open, and we will have to wait and see the development of the different political movements, both internal and external. The U.S. elections are ahead of us, and depending on their outcome, they will determine Washington’s policies. Meanwhile, from the White House, the pressure continues, as shown by these recent sanctions on national political figures, while negotiations and pacts are continuing at an accelerated pace — agreements that, as we know, are not good for the workers and the people.