“They Are Cracking Down Like This Because They Are Scared of the Movement”: Doctor Arrested by NYPD Speaks Out

Left Voice editor, doctor, and street medic Mike Pappas was arrested for violating curfew on Thursday night while marching against police brutality. He made this video at 2am Friday morning after he was released. 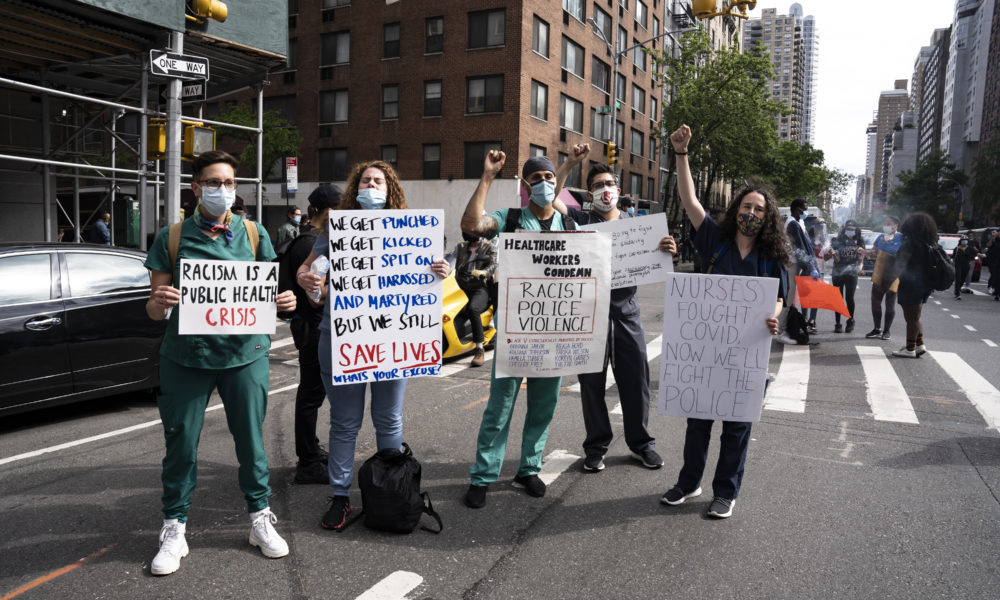 Mike Pappas is a frontline doctor and a reporter for Left Voice. On Thursday night, Mike was arrested by the NYPD while he was participating in the Black Lives Matter protest in the South Bronx. He was providing medical care to people injured with a group of his coworkers. Like thousands of other people in New York, he has been charged for breaking the curfew that De Blasio imposed to crush dissent. We must fight back these attacks from the state against the most basic democratic rights.

Mike here, Physician, health care   worker, member of Left Voice just got out of the 40th precinct behind me.

I was arrested today while acting as a medic at a protest in the Bronx with, Take Back the Bronx. I was just kept with up to 17 other people, at one point in an 8 by 10 cell, none of which had masks on. The police came in laughing at us every time we said ‘maybe we need masks while we are in here’. It was about 85 degrees in that cell was 17 people in there. None of the police had masks on, so, you know, when we brought that up they said, “Maybe you shouldn’t have been out on the street protesting”. Nobody would have to be out on the street protesting, if it weren’t for the racist ass system that is policing in the United States.

Ultimately what’s gonna happen is, this type of shit is gonna increase the spread of coronavirus and more people even die from this and, you know who’s gonna fucking have blood in their hands for that? It’s gonna be democrats, like Cuomo and De Blasio. With all their “vote them out, vote them blue” and all that shit, there’s no voting them out, there´s no voting blue. The system itself is completely corrupt, we need to destroy the entire system, the capitalist economic system is dependent on people like those people behind me upholding this type of system.

Some of the police when we were critiquing what we were doing were saying, “you know, not all the police are bad”, I’m sorry?! The entire system of policing is completely corrupt, it’s a completely racist system based on slave patrols and all police are bad.

The NYPD’s budget should be defunded to zero. To zero. We don’t need any of them, we need to be out in the streets and people need to keep mobilizing. Cracking down like this is just showing that they are scared of this movement and we just need to make sure that this movement grows. Keep it up everybody!

Yesterday evening, Mike Pappas was arrested by police while he served as a medic at a Black Lives Matter protest in the South Bronx. He was released from jail in the early morning and recorded this video.