“This Is Not What America Stands for” — except, uh, in Latin America

The United States has long supported right-wing protests to subvert elections. This is so common that there’s a joke about it: Why has there never been a military coup in the U.S.? Because there is no U.S. embassy there. 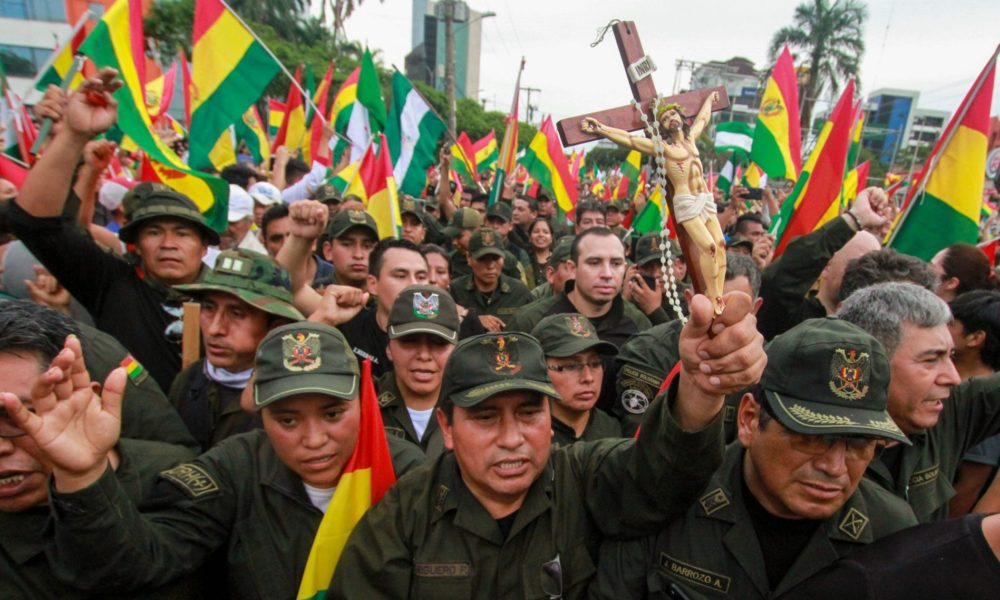 “This is not what America stands for.” That’s what Thom Tillis, a Republican senator from North Carolina, wrote on Twitter while a right-wing mob was marauding through the Capitol. This sentiment was echoed throughout the liberal media and by members of both the Republican and Democratic Parties, who repeated the refrain that “America is better than this.” The right-wing riot was clearly not a “fascist coup attempt” by any stretch. But the images coming out of the Capitol looked eerily similar to actions that the U.S. regime regularly supports in other countries, especially in Latin America.

Racist fanatics forcing their way into a government building, with the tacit support of the police, in order to overturn the results of an election in which Black and Brown people played an important role — that may sound like an apt description of what happened in D.C. yesterday. But it is also what happened in La Paz on November 9, 2019, when proto-fascists stormed Bolivia’s presidential palace in order to stop the reelection of Evo Morales. Just like at the Capitol building, the police stood down and let the racists rampage.

Those protesters installed a coup regime run by the racist religious fundamentalist Jeanine Áñez. Resistance by indigenous people and unions to the coup was repressed with brutal violence. Despite this, the coup government was recognized by the U.S. just days later — and also by the UK, the EU, and right-wing governments in Latin America.

Behind the scenes, the U.S. government — via both diplomatic and clandestine channels — had long supported right-wing forces in Bolivia’s eastern provinces in their attempts to topple Morales center-left government. Secretary of State Mike Pompeo had been very open about his support for efforts by the U.S.-controlled Organization of American States to subvert the election results.

This was no isolated incident. Half a year earlier, the U.S. State Department recognized an “interim president” in Venezuela — another thinly veiled coup attempt orchestrated in Washington. This was combined with extensive diplomatic and economic aggression. There was yet another U.S.-backed coup attempt in mid-2020, which stood out mostly for its dilettantism. Trump’s National Security Advisor John Bolton, rather than pulling strings behind the scenes, was bragging about it on Twitter.

But are such undemocratic actions merely a product of the Trump regime? Not at all. When Barack Obama was president and Hillary Clinton was his secretary of state, there were coups in Honduras against Manuel Zelaya in 2009 and in Paraguay against Fernando Lugo in 2012. In both these cases, the U.S. embassies were heavily involved, yet with more deniability than Bolton’s public buffoonery toward Venezuela. In fact, we can say that while the Democratic administration had a more moderate tone toward Latin America, it was actually more effective in orchestrating right-wing coups.

The institutional coup against presidents Lula da Silva and Dilma Rousseff of the reformist Workers Party (PT) in Brazil, was also heavily supported by the U.S. State Department — and that policy stretched between both the Obama and the Trump administrations. That coup opened the way for a right-wing fanatic like Bolsonaro to take power.

These are only examples from the last decade. U.S. interference in Latin America, installing bloody dictators in order to secure profits for U.S. corporations, has been going on for more than a century. In fact, it’s so common that there’s a joke about it: Why has there never been a military coup in the U.S.? Because there is no U.S. embassy there.

Now, with just two weeks left in his presidential term, Trump is offering a small taste of these gangster methods in the heart of U.S. imperialism. This kind of violence to subvert democracy is exactly “what America stands for.” And that is why the Left needs to oppose U.S. imperialism in all its forms — in contrast to “progressive” Democrats like Bernie Sanders and Alexandria Ocasio-Cortez, who often legitimize U.S. aggression. Internationalist opposition to the State Department, whether it is currently run by a Democrat or a Republican, is a necessary precondition to rip Trumpism out at the roots.