‘This Is Our Cry’: Refugees on Strike in Germany

In Deggendorf, Germany, refugees from Sierra Leone have been on a “closed-door” strike, refusing to participate in the camp’s life and activities since December 15. The protest was followed by a hunger strike. Meanwhile, negotiations have been held between the refugees, the local authority of the district administration, and the Federal Office for Migration and Refugees (BAMF). 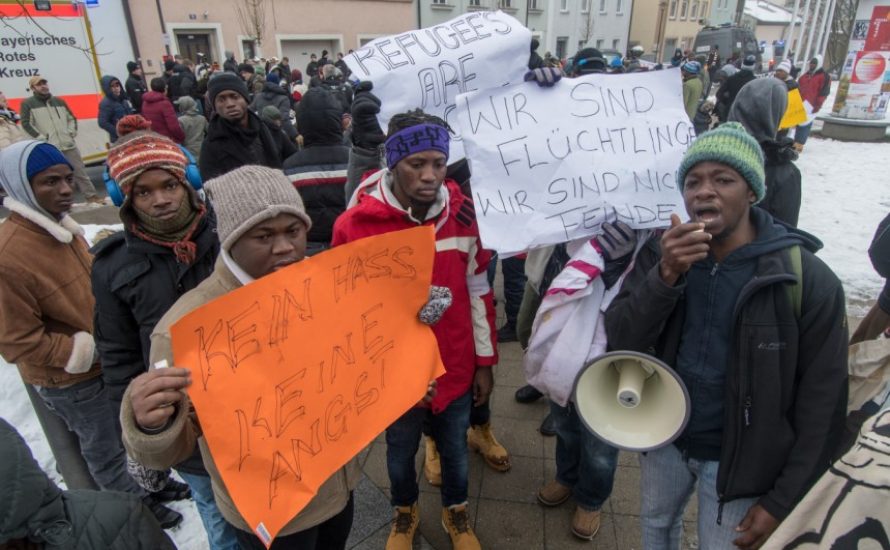 This article was originally published in German on Klasse Gegen Klasse.

In Deggendorf, Germany, refugees from Sierra Leone have been on a “closed-door” strike, refusing to participate in the camp’s life and activities since December 15. The protest was followed by a hunger strike. Meanwhile, negotiations have been held between the refugees, the local authority of the district administration, and the Federal Office for Migration and Refugees (BAMF).

Why was there a strike?

Despite what the media says, poor living conditions were not the primary reasons for the strike. Above all, the refugees sought a reduction in two years required time of detention. Children, pregnant women, and the sick in particular are suffering from abhorrent living conditions, such as restrictions on movement, threats of deportation, poor medical treatment, poor sanitation and hygiene, and unsafe conditions. Another reason was the widespread denial of applications for asylum by the BAMF (Federal Office for Migration and Refugees) and the insufficient delivery of identification papers that would allow refugees to find work or leave the deportation camp to stay with families and friends.

For many refugees from Sierra Leone, the protests are also motivated by the constant fear of being deported back to Italy, the country where most Sierra Leonean asylum seekers arrive. Due to the Dublin Regulation in the EU, the member state where refugees first arrive becomes responsible for reviewing asylum seekers’ applications. Most migrants enter the EU through Italy, Greece, or Spain. However, because conditions there are inhumane, migrants are later sent to central Europe, such as Germany. Once they arrive, they have no permit for asylum in Germany and are sent back to Italy or the country where they first arrived. In Italy, for example, (after being deported from Germany in this cycle), Sierra Leonean refugees are threatened by homelessness and further marginalization because they are not allowed to work. Moreover, Sierra Leone is not recognized as an asylum state. In most cases refugees do not get any information about their status or fate during their 24-month stay. One refugee explained:

We stay in the camp for two years. Then we find out if they accept us or not and maybe deport us to Italy. Police have begun to come for people in the camp. This is what led to the protest.

The man added that he has contact with other Sierra Leonean refugees who were deported and are now living on the streets in Italy. Even mothers, children and the ill were allegedly deported.

“People are suffering in Italy, so when they catch you here and deport you to Italy, you’re afraid you’re going to lose your life.“

The refugees listed the various reasons that they fled from Sierra Leone, including several cases of forced female genital mutilation. Although these women got medical certificates for their cases when they arrived in Germany, the BAMF rejected their asylum applications. While these medical exams also screen for hepatitis, HIV, and tuberculosis, this does not guarantee treatment. The refugees also discussed how corrupt politicians, as well as international land grabbing due to resource exploitation, especially diamonds, has reduced the quality of life and has left them with no other option but to flee.

The living conditions in the camp are horrendous. Up to 50 people are supposed to share a bathroom and up to eight people have to share a room that’s only 16 square feet. An old renovated warehouse next door is now used as the new reception center for asylum seekers, and they have built 100 square-foot dormitories, each meant to house four people.

Refugees told us about their fear of getting sick due to a lack of hygiene in the deportation camp. Contracting infections, such as the Hepatitis B virus, is one of the main concerns. Although there is a high chance of full recovery, chronic symptoms can still develop. One refugee reported that he got a positive diagnosis for the Hepatitis B virus from a doctor, but he has yet to receive treatment.

“They tested me and said I have Hepatitis B. There is no medication for me because the government will not pay money for that now. That’s why at night I feel the symptoms. I asked them: What is my treatment now? They said the government needs to pay for it before I can be treated. […] That’s what they always tell me. I have the paper, the medical results that I have Hepatitis B, and they won’t give me treatment.“

The refugees told us about their hopes for a peaceful life for themselves and their kids. However, German language lessons are only provided for children and teenagers between six and 20 years old. In some cases, the refugees claim that their age was registered as older than their actual age, making access to German classes impossible.

“They told me I was 21 years old. I said I am not 21, but that’s the age they assigned me. So now I am sitting here with no access to school. And you have to know the language here.“

This protest organized by the refugees is an important action to work towards solving the problems critical to their living conditions, which are potentially fatal.

After the strike had begun, a demonstration of approximately 150 people from Deggendorf was organized to raise awareness for the refugees‘ situation. There were no incidents on the side of the demonstrators supporting the refugees. On the other hand, fascists from the Dritter Weg (a fascist terrorist group that attempted to attack a synagogue in 2003), alongside a politician of the AfD party, filmed the protesters via a Facebook live stream. The demonstrators were harassed and insulted by the right-wing group. It was also reported that the neo-Nazis threw ice and snow at the protesters – directly in front of the police. Racists and right-wingers were attempting to provoke the demonstrators supporting the refugees and trying to delegitimize the protest.

“We were booed at by some racist people. They were throwing ice at us. Some were treating us in racist ways in front of the police, but we tried at least to talk to the police so that they will understand our demands. There was no violence in the end. We maintained peace and respected the police.“

On December 23, a spontaneous demonstration of 100 supporters headed through the city center to the camp where it ended in a party with refugees. People danced together and shouted: No more deportations — No excuses, no exceptions!