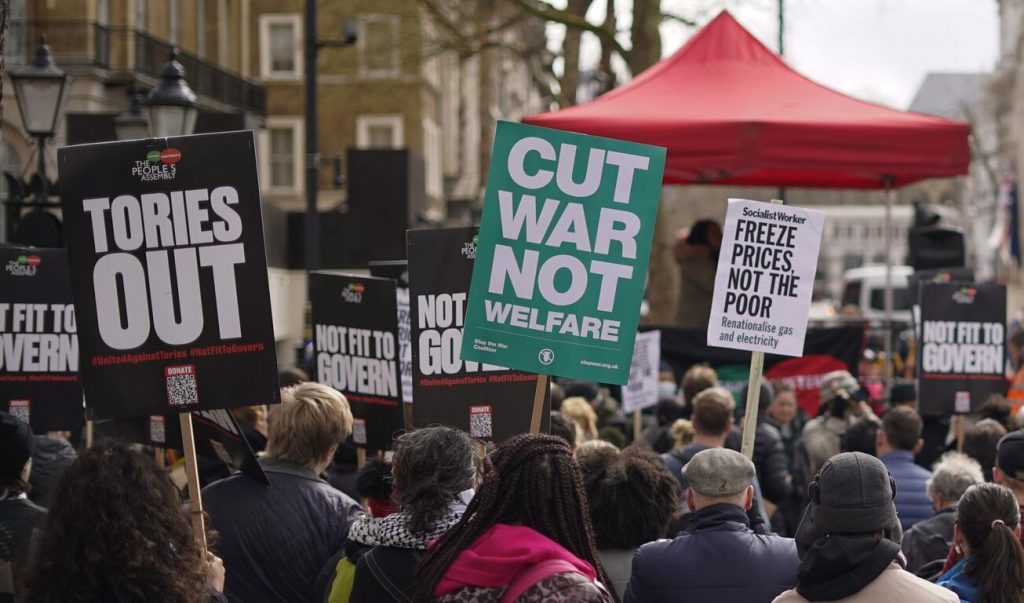 This week, UK prime minister Boris Johnson’s battered government is facing a tough economic outlook. Official figures show that the economy came close to stalling in April as GDP shrank by 0.3 percent, consistent with predictions that the UK will become the slowest-growing OECD economy. The new data also confirms that the disparity between wages and the cost of living is growing to levels not seen in decades, all as households cope with a record increase in energy bills.

This is the worst economic situation the UK has seen in decades. Johnson is trying to refocus the political agenda after surviving a no-confidence vote with a slim majority in which 148 ministers from his own party voted against him. The prime minister, in addition to getting himself together politically, and must avoid a recession. As if that were not enough, is facing strikes that could extend into a summer of discontent.

In a context of high inflation (9.1% in May), wage freezes, falling living standards, and severe labor shortages in some sectors, discussions around wages have taken center stage. Over 50,000 railway workers are currently in the midst of a nationwide strike action — the largest work stoppage since 1989 — to demand better pay and employment guarantees. The workers, who are represented by the National Union of Rail, Maritime and Transport Workers union (RMT), went on strike on Tuesday, and have other strikes planned for June 23 and 25.

Johnson’s first response to the strike announcements was that better wage settlements could threaten a 1970s-style “wage-price spiral,” which in turn would force the Bank of England to raise interest rates further. However, as we have written previously, higher wages and employment are not to blame for rising inflation. Amid the cost-of-living crisis, the prime minister also wants to cut more than 90,000 public sector jobs.

Meanwhile, in an interview with the Sunday Telegraph, transport minister Grant Shapps said the government is considering legal changes to allow agency workers to replace striking staff in order to reduce disruption to services. Shapps added that workers were being misled in some cases by “Marxists” who are “determined to turn this into some sort of fight, as they see it, with a Tory government.”

But beyond the railroads, there could be more strikes, and rising inequality could spill over into other sectors. National Health Service (NHS) workers in England are facing an annual pay offer below inflation, which for nurses would mean a 10 percent cut in real terms to their income. These public sector wage agreements are bound to provoke widespread unrest.

Public sector workers have no shortage of reasons to go on strike. Wage depreciation affects millions of workers who served on the front line of the pandemic. This sector faces much slower wage growth than the country as a whole — 1.6 percent, compared with 8.7 percent growth in private sector wages.

On Sunday, thousands in London marched to Parliament as part of a demonstration organized by the Trades Union Congress (TUC). Protesters demanded a real wage increase for everyone, as well as a ban on zero-hours contracts (contracts where workers must be available when required, and employers do not specify a minimum number of hours or time slots), a ban on redundancy, an increase in sick pay, an end to racism at work, and a tax on energy profits to pay the bills of working families.

Unison, the largest union in the country, also called on its members to join the march and said it was “strike ready.” This union, which represents 1.8 million public sector workers, brings together workers in health care, education, the judiciary, water supply companies, government and environmental agencies, energy companies, and contractor workers who are employed on an outsourced basis for hospital cleaning, caretaking, call centers, and other work.

The dynamics of this situation and the willingness of workers to fight for their rights reminds us of what was known as the “winter of discontent” — the wave of struggles that took place in the winter of 1978-1979 in the United Kingdom in response to the then Labour government’s attempt to impose a five percent wage ceiling at a time of high inflation. Workers should continue their struggle, and keep integrating more sectors into this fight.

Originally published in Spanish on June 15 in La Izquierda Diario.