‘We’ve Been Driven to the Point of Desperation’: A Trans Starbucks Worker on the Unionization Wave

Left Voice speaks to a trans Starbucks worker about what having a union would mean to her. 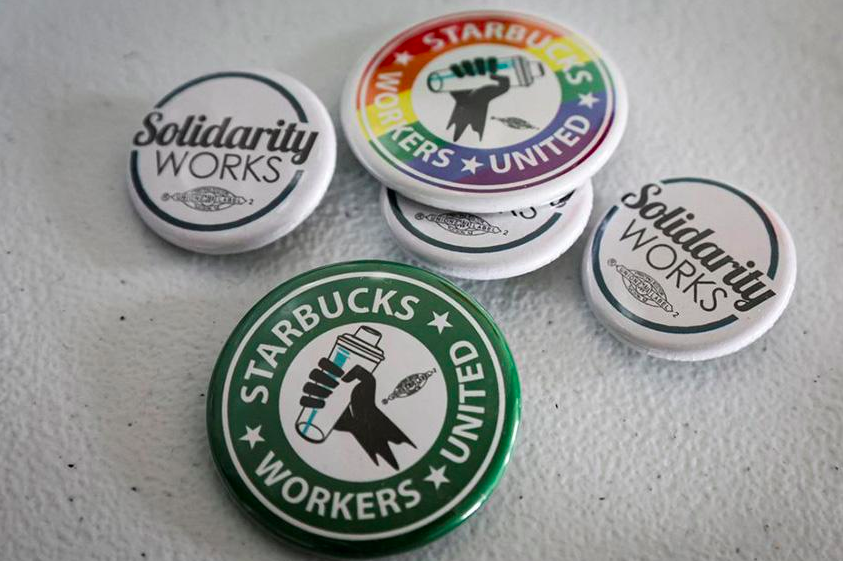 Petitions for union representation in the United States are up more than 50% compared to last year, and about a quarter of these petitions are from workers at Starbucks locations across the country. Queer baristas are leading this fight. To discuss this recent trend of unionization and what it could mean for trans Starbucks workers, we sat down with Eva, a transfemme Starbucks worker in Brooklyn, to hear her thoughts.

How long have you been a partner at Starbucks?

You mentioned that employee benefits have been decreasing. Can you say more?

So we used to get basically free drinks and one free food item no matter what, like whether we were working or not. And now it’s just at a discount if we’re not working and we have to be on the clock to get free stuff. Which is interesting and kind of annoying, but like, I kind of saw that as the beginning of the cutting costs and union busting trends that are happening right now. Luckily, I [work other jobs], so I was able to navigate through, but it definitely is affecting people because a lot of [employees] are sort of relying on Starbucks as a food source, like when you don’t have time to get groceries or whatever. It’s definitely affected a lot of our budgets and quality of life. And hours are getting cut, and a lot of health insurance benefits, for example, are only available to us if we qualify for full time hours. And so many people’s hours are being cut, which jeopardizes a lot of people’s ability to qualify for health insurance.

How long have they been cutting people’s hours?

It started being noticeable around December 2021, at the height of Omicron. So that was also fun. If it started happening before then, I wasn’t cognizant of it. But, people have been complaining about their hours being cut for a while. And it’s been happening ever since stores started unionizing.

What do you think some of the potential benefits of the union could be?

I’m sure you’re asking about the employees, but I really think that it would be beneficial for Starbucks as a company. I think they would actually save a lot more money than by doing what they’re doing, which is actually causing a serious plunge in quality in service, the quality of the product, and trust in the company in general. Because prices have gone up, people are not getting their stuff as fast, because we’re constantly understaffed and overworked.

For the employees, there would be the benefit of being protected from all of the situations that have been kind of hell and made the working environment significantly worse. Also, Starbucks touts an environment of inclusivity and acceptance, and this is because of the demographic that they tend to employ. I think that those values would be a lot more protected with a union.

We’re fighting for $30 an hour right now, and that would actually be a living wage for the job done. Especially given the fact that even before the hours cut, most people were doing 2 to 3 people’s positions at once  during a shift, whether it was during turnover, as a result of call outs, etc, etc., etc., because stores never hire enough people. Stores never schedule enough people. That’s just kind of part of fast food culture. They staff shifts in a way that makes people come in for extra hours out of guilt. Shift supervisors get their hands tied. And that whole culture would start to, at least, have a little bit more support and understanding with the union. Because we could actually have a seat at the table to advocate for our needs.

What would being in a union mean to you personally?

I think it would just make me feel more protected, and also, honestly, prouder to go into work every day because I like the job itself, I enjoy being a barista. This is something I enjoy doing. I love getting to know the community. I appreciate knowing that I’m a good part of somebody’s day. Like it’s really just everything surrounding the job that’s giving [Starbucks workers] a lot of pause right now. I think a union would actually make me proud and excited to go to work again. Right now, there are definitely feelings of dread because I know we’re going to be understaffed, I know customers are going to yell at me because their drinks aren’t ready yet, because we always get behind at peak, because everyone’s doing like three people’s jobs.

So I don’t know if you’ve been hearing about it, but in the media right now, there’s this whole idea of “Generation U” as in union, of late millennials/Gen Z who are all about the unions. Do you consider yourself to be part of that generation?

Yeah, definitely. Absolutely. And I mean, I just think it’s ridiculous that it’s taken this long. And I think that the reason it’s happening right now is because we’ve been driven to the point of desperation. I mean, with going back to in-person and realizing that nobody has learned anything as far as appreciating labor and actually treating essential workers like essential workers. I think even the most complacent folks have been, not radicalized, but finally beginning to understand that we really need to advocate for our needs if we are to be able to exist.

To go off of that, I think that the other interesting part of the things we’re seeing right now and the current generation that everyone’s talking about is that not only are they, like you were saying, saying, “no, if we’re essential, pay us and treat us like we’re essential,” but also, a bunch of us are queer, right? And a bunch of us are trans, and we’re in this moment where we’re seeing huge attacks against queer people in general, but trans people specifically. And I was wondering how you see that intersecting for you as someone fighting for the union.

I think that I’ve always felt that sort of solidarity and understanding that we needed to be standing together as workers from the trans community who have worked at Starbucks. And we have always been looking out for each other specifically. You know, it’s definitely not the worst job that I’ve had since coming out, but I’ve had very transphobic and shitty shift supervisors, and I’ve also had trans shift supervisors who I could go to. I think a lot of the reason that some [trans Starbucks workers] weren’t able to get momentum going towards the union to begin with is just because, by virtue of being trans, we’re kind of very focused on self preservation and keeping our jobs and making sure we get the benefits that we can. But again, there’s just been a breaking point where this is necessary. And it’s sort of an important point of no return, in a way. But I’ve always felt a workers’ solidarity more from my trans coworkers than anybody else. I think it’s by virtue of understanding that we have to be in this together.

Do you think that trans people are helping lead the union drive?

As far as I’ve seen. Yes. I met a couple of the Starbucks Workers United leaders, and yeah, I mean, of course they were all trans. [Laughs] So just from the people that I have visibly seen, yes, I would say so.

What does the union give to trans and queer people specifically?

A protection of benefits. I mean, the biggest material condition that I have seen change drastically in the all of the union busting/cost cutting stuff has happened has been a significant decrease in hours. I’m lucky I have another place of employment. But if Starbucks was my only source of income right now, one, I would not be able to pay rent. Two, I would not qualify for benefits. I currently have insurance through another avenue, but I would not qualify for health insurance if this was my only path towards health insurance because I do not have full time hours. And I think a union’s job is to protect [our benefits from being cut] and [stop] these decisions from being made unilaterally without any input from the employees would actually affect.