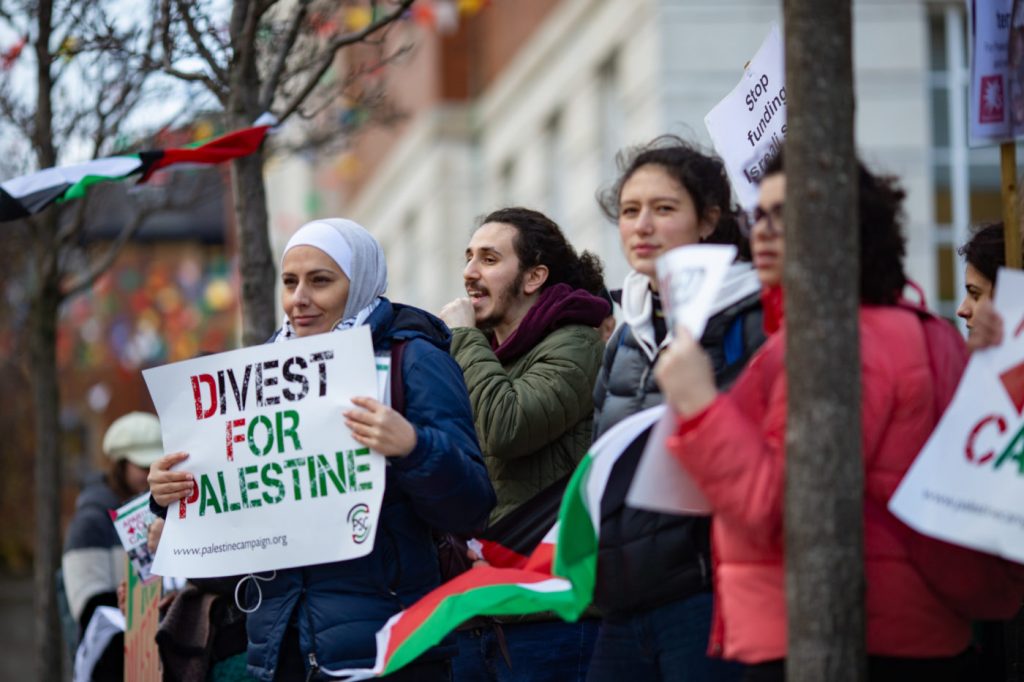 On Thursday, June 10, the Delegate Assembly of the Professional Staff Congress Union (PSC), which represents more than 25,000 faculty and staff at the City University of New York (CUNY), will vote on a resolution “In Support of the Palestinian People.” The resolution, which calls on the PSC to “condemn the massacre of Palestinians by the Israeli state,” is being brought to the Delegate Assembly by several standing committees of the union, including the Anti-Racist Committee, the International Committee, and the Academic Freedom Committee. This resolution also includes language that explicitly provides support for the Boycott, Sanctions, and Divestment (BDS) movement, and calls on the University to divest from its more than $1,000,000 of investment in firms and weapons manufacturers directly involved in the occupation of Palestine. As elected members of the PSC Delegate Assembly, we plan to vote yes on this resolution and to propose amendments to make clear the role that the United States, CUNY, and even our unions play in the continued oppression of the Palestinian people, but we also want to urge our union to treat this resolution, not as an end in itself, but as the beginning of a more robust struggle in defense of the Palestinian people and against U.S. military and economic support for the state of Israel. As we have written elsewhere, “Labor Must Demand: ‘Not One More Cent, Not One More Bullet’ for Israel.”

Although unprecedented in our union’s history, this resolution is not being proposed in a vacuum, but follows on the heels of a series of other labor actions taken and resolutions passed by U.S. education workers and unions since Israel’s latest war on Gaza in May. In Oakland on June 4, for instance, members of the International Longshore and Warehouse Union (ILWU) stood in solidarity with demonstrators protesting the arrival of the Israeli cargo ship Volans, and refused to unload the vessel. These protests have been repeated at ports across the country, including Elizabeth, New Jersey, where more than 1,000 protesters greeted the Volans on June 7. In San Francisco, the 6,000 member United Educators of San Francisco union passed a resolution endorsing the BDS movement and condemning U.S. support for Israel. Meanwhile, in Los Angeles, members of the United Teachers Los Angeles union have passed a similar resolution in several Area Meetings, and the union House of Representatives is planning to vote on the resolution this September. Unsurprisingly, these actions and resolutions have been met with enormous pushback from Pro-Israeli organizations, who have hounded and harassed critics of Israel, such as Steven Salaita, for years. Additionally, CUNY students have already been organizing in support of Palestine, including a campaign in the University Student Senate to reject the IHRA definition of antisemitism and a campaign demanding that CUNY commit to BDS.

We are proud to be part of a union whose members have the integrity and courage to take a stand against Israeli repression and in support of the people of Palestine in their struggle to win freedom from Israeli occupation. And we support the original resolution as proposed by our union’s committees, with one important caveat. While calls for divestment are important, we are concerned that the resolution does not call on the union to directly demand an end to all U.S. economic and military aid to Israel, and that it does not ask the union to use its resources to help build and support a labor movement against such aid. No amount of sanctions, after all, will have any serious effect upon Israeli policy so long as the United States, which uses Israel as a base for its imperialist agenda across the Middle East, continues to provide weapons and economic support to Israel. This is why we are calling on the PSC Delegate Assembly to include the following amendment to the resolution: “Be it further resolved that the PSC demands an immediate end to all U.S. economic and military aid to the state of Israel, and that the PSC commit itself to building a labor movement to force the U.S. state to end such support for Israel.”

This resolution represents a remarkable step forward for our union and its commitment to internationalism; consequently we are extremely disappointed that the Executive Council of our union — the newly elected members of the New Caucus, which has run the PSC for the last 21 years — has openly voiced its opposition to the resolution and have put forward a watered-down alternative. While the original explicitly advocates divestment from the occupation and calls on the union to bring that demand to all of its national affiliates, including the AFL CIO, the new resolution includes nothing more combative than a condemnation of the Israeli massacre of Palestinians and a call for discussion about how to “engage its labor affiliates and the university in order to influence U.S. policy.” Putting forward such toothless and compromised resolutions has been a common response of the bureaucratic leadership of the PSC any time rank-and-file members offer a resolution of their own, and reveals the degree to which the union remains captured by a politics of accommodation to the U.S. state. Further, the Executive Committee’s cynical call to “engage” the membership in more discussion, something it almost never does for important issues that directly affect the membership, is little more than an attempt to avoid actually confronting and condemning CUNY’s complicity with the state of Israel.

No single resolution will end the oppression of Palestinian people and the occupation of Palestine, and no single resolution is capable of transforming the PSC CUNY into a real fighting union, but taking a stand on this issue and defending the self-organization of the rank-and-file members who created this resolution is a first step toward those goals. We urge our fellow Delegate Assembly members, our co-workers and union brothers and sisters, to support and vote in favor of this resolution and our amendment on Thursday.