For months the workers of the Hilton Stamford have been battling it out for a good contract. They won recognition for their union 110 votes to five in December of 2017. Since then they have been strengthening their organization internally while mobilizing for fights outside their hotel. 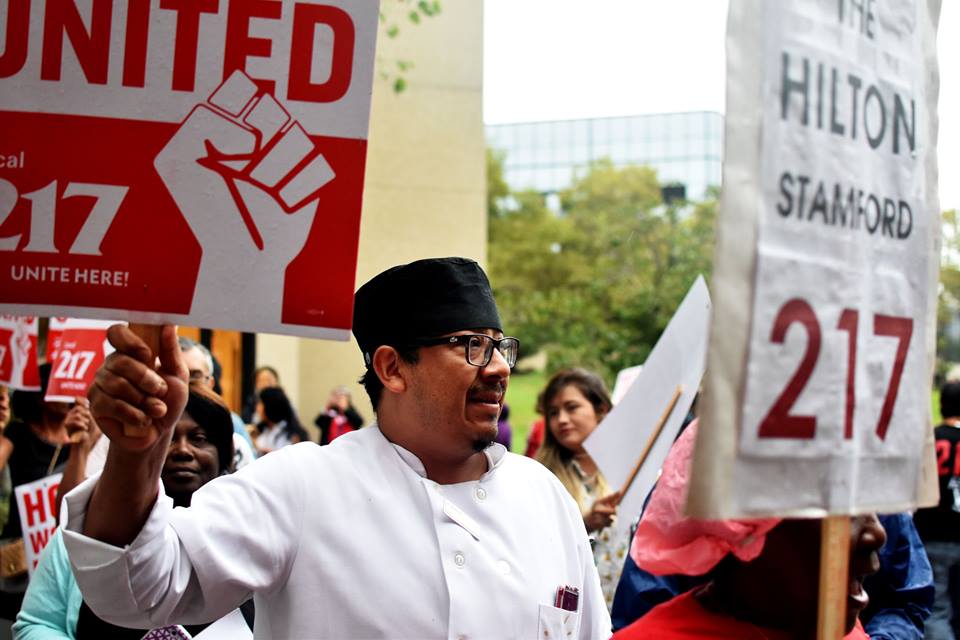 For months the workers of the Hilton Stamford have been battling it out for a good contract. They won recognition for their union 110 votes to five in December of 2017. Since then they have been strengthening their organization internally while mobilizing for fights outside their hotel. Workers have joined picket lines at the Hilton Hartford – in a contract fight as well – and many travelled to Philadelphia to be part of the thousands-strong labor march against family separations. In May, Hilton workers additionally called a boycott of their hotel to pressure the company and win a decent contract with liveable wages, affordable healthcare, and a pension.

But, the bosses have also been busy. They have fired a leader and disciplined others. In negotiations they move like molasses, and are constantly finding ways to intimidate and hassle.

So yesterday, despite the rain, the workers respond with a picket. They walked the line alongside workers from the Hyatt Regency Greenwich, from the Hilton Hartford, and from other workplaces and schools across Connecticut. The whole of
UNITE HERE Local 217 supports their sisters and brothers in Stamford.

Madeleine Freeman, a Left Voice contributor who attended the picket said, “It was powerful to experience how resolved and energized the Hilton workers were. It was great to see the support and solidarity between fellow workers of different national origins and who spoke different languages. Yet, they were all fighting together for the contract they know they deserve.”

Solidarity is key to victory, and the Hilton workers are winning support from everywhere.
And they are not the only hotel workers on the move today. In Chicago, workers at 25 hotels are on their third day of a strike for a contract that provides year-round healthcare coverage. In the coming weeks, there will be strike authorization votes in at least four cities against Marriott, the largest hotel company in the world. In other industries, today is also the last day in the incarcerated workers strike that began 19 days ago in prisons around the country.

“I think it’s inspiring when working people travel long distances to support each other and share knowledge and strength, like the hotel workers from Hartford did for the workers from Stamford. And I firmly believe that the best cure for despair in our political age is to get out and do something that will build working class power,” said Alexandra Walling, of the DSA Socialist Feminist Working Group.

Housekeepers, servers, bartenders, baristas, bellworkers, door workers, maintenance workers, reservationists, concierges, front desk agents, and everyone else that makes a hotel run are starting to stand up across the country. They join teachers throughout the nation who helped put class struggle back on the map and other sectors of the working class who are learning to fight in the post-Janus world with militancy and solidarity.