24,000 healthcare workers at Kaiser Permanente hospitals have voted to authorize a strike and are speaking out against dire working conditions. The vote comes amid an uptick in labor stoppages in the United States. 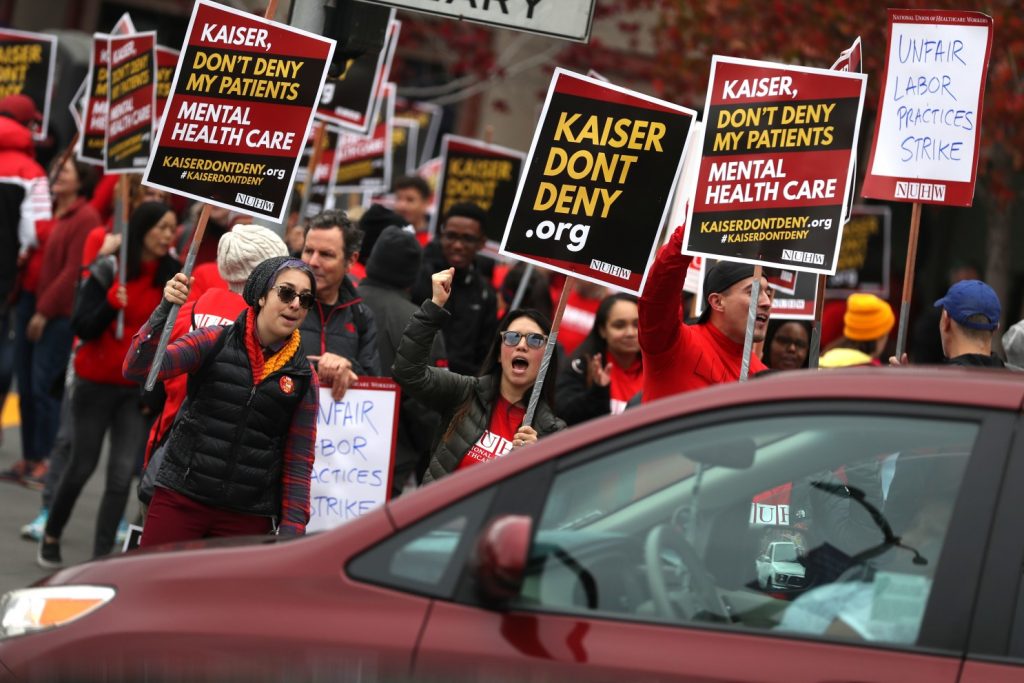 24,000 nurses and other healthcare workers at Kaiser Permanente hospitals in Oregon and California have overwhelmingly voted to authorize a strike, with 95 percent voting in favor. The workers are speaking out against low pay, horrendous working conditions, and against a proposed two-tier system where new hires will get paid much lower wages for the same work. The workers are also demanding a four-percent raise for the next three years and a promise by Kaiser Permanente to hire more nurses to address staffing shortages.

“We’ve really proven our worth and our dedication to our patients. Over the last two years, we’ve worked without breaks, we’ve worked without lunches, we worked out of ratio, without resources, short staffed. And we’ve always gotten the job done, to the detriment of our own health sometimes,” said healthcare worker Jenny Wong-Swanson, a registered nurse.

This comes amid an uptick in strike activity. 1,000 Alabama miners are currently on strike. Tens of thousands of entertainment industry workers in IATSE voted overwhelmingly to approve a strike as well. Smaller strikes are also underway, including 700 healthcare workers in Massachusetts and 450 steelworkers in West Virginia.

1,400 Kellogg workers are also on strike and speaking up against the two-tiered system. Like the workers at Kaiser, Kellogg workers understand that the system only serves to drive down wages for all workers and hyper-exploit the lowest tier. It highlights that while the two-tier system has become common in workplaces, workers across different sectors are starting to organize against it.

Kaiser claims that they are paying above the industry average and won’t budge on increased wages and better working conditions; they are offering a meager one-percent wage increase. Yet, they are making a massive profit from offering basic healthcare.

“We’re not asking for anything outrageous, we’re just trying to be fair and they’ve taken the stance they want more profits, so this is where we’re going,” Rob Jones, an RN at a Kaiser-San Diego County.

“I watched multiple patients die,” says @wanderrlex, a travel nurse, who previously worked at Kaiser said in an Instagram story. “I watched them [Kaiser] put profits over patients a thousand times. We are talking about one of the wealthiest companies in the country and virtually every room had broken or outdated equipment.”

A key demand is to hire more workers to combat short staffing. Even before the pandemic, staffing ratios were too high. After the pandemic, it became even worse, with healthcare workers leaving the hospital and around the country, healthcare workers leaving the profession. In a survey at Kaiser Permanente in Oregon, 42 percent said the treatment and work conditions at the company has led them to consider leaving the medical field entirely. 60 percent say they are considering seeking employment at another hospital.

There are even more workers set to be fired as a result of vaccine mandates. The two-tiered system will not only pay some workers less for the same work, but many workers explain that it will keep workers from being retained.
The union is forced to give Kaiser Permanente 10 days notice before a strike is actually called. But with 95 percent of workers voting for a strike, it’s clear that the workers are ready to fight. The issues affecting the workers at Kaiser Permanente are not singular or specific: they are the issues affecting healthcare workers around the country— overworked healthcare workers, lack of staffing, two tiered pay under a healthcare system that is meant to make profits, not serve people.

In a post on Instagram, a nurse wrote, “Think of the scene from Squid Game when the last 2 players are being watched by the VIPs as they “play” the last game. It kinda feels like that working in healthcare right now.” She went on to say, “if you are part of a union, get invested in understanding. It’s going to take all of us to make changes in our health system. We are in the business of humans. Humanizing what we do should be worth the investment.”