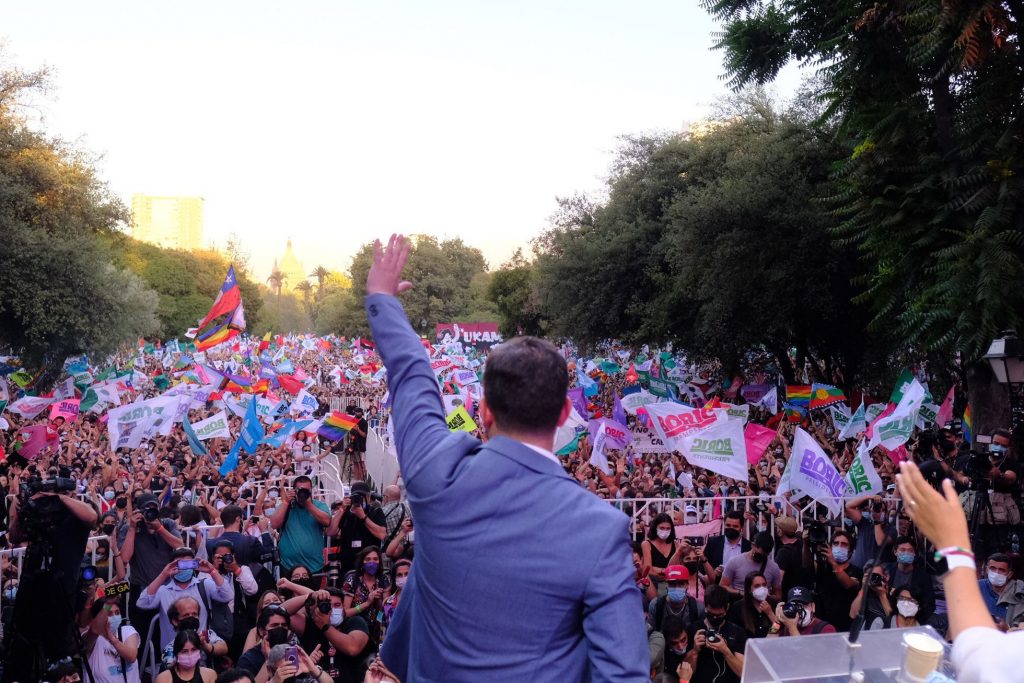 As the election results came in on Sunday, hundreds of thousands of people took to the streets of Santiago. José Antonio Kast, a fan of the Pinochet dictatorship — and Chile’s version of Donald Trump — had been soundly defeated. The left-wing candidate Gabriel Boric was ahead by more than 10 points. In the run-off election, Boric had gotten support from a broad coalition, reaching from the Christian Democrats to the Communist Party. Kast, for his part, was able to align Chile’s traditional Right behind his even more xenophobic Republican Party.

Kast conceded the same night. The right-wing billionaire Sebastián Piñera, Chile’s president for the last decade, called to congratulate the winner, and promised “complete collaboration” in the transition. Boric answered that this “speaks well for our democracy.” Many were worried that Kast, who has copied Trump’s playbook meticulously, would dispute the results with accusations of fraud — but in the end, the transition was smooth.

You might also be interested in: Runoff in Chile: For Defeating Kast and the Right, without Confidence in Boric or His Project (Declaration by the Revolutionary Workers Party)

Piñera had plenty to be thankful for. Starting in October 2019, millions of people joined a revolt against the neoliberal regime. Piñera’s government was on the ropes, and could have been toppled by a general strike. Boric was instrumental in signing a “Peace Agreement” to take the movement out of the streets and ensure an orderly transition to the constituent assembly process. This earned him praise from the criminal Piñera, who just barely survived two impeachment trials.

Boric’s election is historic, and not just because at 35, he is the youngest president-elect in the country’s history. A decade ago, he was the president of the University of Chile Student Federation (FECh). He was a leading figure of the student revolt of 2011 — which was brutally repressed by a recently-elected Piñera. He went on to found a new reformist party, the Frente Amplio (Broad Front).

The rebellion of 2019 led to an implosion of the traditional parties — an “organic crisis” in which the masses lost faith in the institutions of the regime. Neither the center-left nor the center-right parties, who governed in the country since the end of the Pinochet regime, even made it into the second round of the presidential elections. Kast represented a far-right reaction to the protest movement — people hoping to restore Pinochet’s Chile, which had been so profoundly questioned. Boric, in contrast, represented an attempt to direct the movement into institutional channels, promising that the demands could be resolved via elections. It was precisely when large parts of the movement withdrew from the streets, following Boric’s lead, that the Far Right could regain its confidence and present a monster like Kast.

Around 4.6 million Chileans voted for Boric — more than any presidential candidate has also gotten. The turn out was 55 percent — very low, which expresses broad distrust in Chile’s degraded “democracy,” but still higher than in any Chilean election since voting became voluntary in 2012. Some people were excited by Boric’s promises to end the 30 years of neoliberalism that came after the end of the military dictatorship. For others, it was more important to beat Kast, who seemed eager to turn back the clock to the time of the dictator Augusto Pinochet, and they voted for Boric while holding their noses. Boric acknowledged as much at his rally, thanking those who voted for him and also those who voted “against the other candidate.”

The rally was full of rainbow flags of the LGBTQ+ movement and tricolor flags of the Mapuche people. Young and old people in Chile are hoping that the “demands of October” will now be fulfilled. The military dictatorship turned Chile into a laboratory for neoliberalism, and today just about everything is privatized — people are demanding decent wages, pensions, education, health care, and housing, as well as an end to sexism, homophobia, and the oppression of Indigenous peoples.

Before the vote, Jacobin wrote that it was a choice between “socialism and barbarism.” But Boric has never promised socialism. In fact, after Kast’s victory in the first round, Boric worked hard to moderate his social-democratic message and appeal to voters in the center. Binyamin Appelbaum, the lead business editorialist of the New York Times, has said that Boric is defending nothing more than “social democracy.” Foreign Policy has added that while Kast is a dangerous extremist, Boric is not. If this is socialism, one has to wonder why the spokesmen for U.S. capital seem OK with it.

Boric came out in defense of Chile’s murderous police force, going as far as to say he would stand alongside cops when they faced down “violent protestors” (which Boric himself had been described as not so long ago). He also assured that he would not touch the privatized pension system known as AFPs. In their big debate, Kast jokingly remarked that Boric had updated his position.

At the rally itself, two chants drew attention to this contradiction: “We are not all here” and “Freedom for those in prison for struggling.” Thousands of people remain in prison since the October Rebellion. Thousands more were beaten and mutilated by police. Close to 300 demonstrators lost eyes or suffered severe eye trauma. The cops, as well as the politicians who gave the orders, continue to enjoy complete impunity. Boric responded vaguely to the chants: “I know what I have to do,” he said, “I have met with the families.” The next day, he clarified that he will “respect the autonomy of the judicial powers.”

In other words: Boric has no intention to release all the political prisoners from the uprising unless he is forced to do so by popular mobilizations. The same is true of all the demands of October. Only a mass movement in the streets will be able to secure high-quality public education and health care for all. It will take further protests to get rid of the private AFPs and guarantee dignified pensions. Workers’ organizations and social movements need to stay in the streets, rather than trusting Boric or joining his government, in order to win these basic demands.

This is especially true because Apruebo Dignidad (I Approve Dignity) is nowhere near a majority in congress. Boric’s coalition, including both the Broad Front and the Communist Party, has just 37 of the 155 seats in the Chamber of Deputies, and 5 of the 23 seats in the Senate. Both chambers are roughly evenly divided between the Right and the Center left. This will lead Boric to further attempts to “triangulate” with the Right and abandon the demands that got him into office.

As the elections were taking place, a Constituent Convention remains in session. The body, which was elected six months ago, is supposed to present a new draft of a constitution by the middle of next year. Chile’s current constitution, in force since 1980, was written by the military dictatorship. For many, a “new constitution” is synonymous with a radical break from Chile’s authoritarian and neoliberal system.

Yet the Convention can only make decisions by a two-thirds majority, giving veto power to the right-wing parties. Based on what its members have been saying, it seems likely that the pillars of the regime will be kept in place. This includes a semi-monarchical presidency (similar to the United States), with an executive who names the heads of the Armed Forces as well as the judges of the Supreme Court, and has the power to veto laws.

The new constitution will also probably be bicameral. The less democratic upper chamber, the Senate, exists in order to block progressive legislation that is demanded by the majority. This aristocratic body saved Piñera from impeachment several times. (Again, this is similar to the United States.) In other words, the new constitution is shaping up to be a lot like the old constitution, with institutions like the Presidency and the Senate that will block the will of the people.

Fulfilling the demands of the October Rebellion will require a real rupture with the institutions of Chilean capitalism. This would require, among other things, a truly democratic constituent assembly. But above all, it would require independent mobilizations by the working class and all the oppressed. Boric, even in his days as a student radical, has always stood for class conciliation and defense of what he calls “republican institutions” (the same institutions that created the dictatorship). What is needed is to tear these institutions down and replace them with the self-organization of working people.

As Boric assumes office, it is worth remembering the experiences of Syriza in Greece and Podemos in the Spanish State. Both these parties, with some of the same ideological foundations as the Broad Front in Chile, promised an end to neoliberalism via elections. But once they arrived in government, they implemented many of the  neoliberal policies demanded by the institutions of the ruling class. The only way to avoid that fate in Chile is for the working class to unite in struggle, build an independent party representing workers and the oppressed, and challenge the interests of big business and international imperialism.