Biden’s Budget Is a Massive Increase in Military Spending

President Biden has released his federal budget amid mounting political and economic crises. It would massively increase defense and police spending, making life worse for the working class at home and abroad. 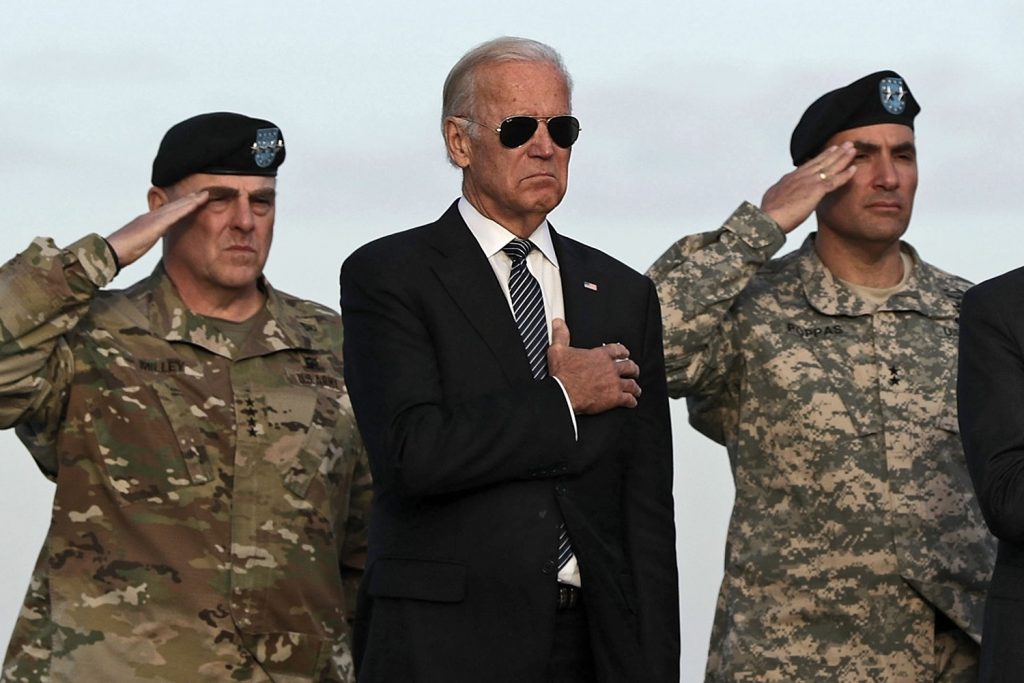 On Monday, Biden released his proposed federal budget for fiscal year 2023, framing it as designed to “reflect three important values: fiscal responsibility, safety and security at home and abroad, and a commitment to building a better America.”

The Biden administration is facing a sluggish economy marked by rising inflation, the lowest approval ratings of his presidency so far, headwinds in the upcoming midterms, and a stalled domestic legislative agenda. In the context of this mounting crisis, the president is using the proposed budget to give his administration a political boost.

Biden is hoping to win support through a mix of proposals to address both progressive and moderate concerns, while touting that his investments could lower costs for families facing inflation. The budget includes some additional funding for climate change, child care, and healthcare (though the details are vague), as well as a proposed tax hike on the wealthy and corporations. And to appease the more moderate wing of his party and constituency, the Biden administration included additional funding for the police as part of the Democrats’ tough on crime campaign that was on full display in the copagandistic recent State of the Union address.

But the ongoing war in Ukraine has taken precedence over some of these issues. The conflict has brought NATO and the U.S. closer to the line of fire with Russia, a country that is in many ways one of the most important allies of the United States’ biggest competitor, China. It therefore comes as no surprise that the Biden administration is following suit with other imperialist governments and using the pretext of Russia’s reactionary invasion of Ukraine as an opportunity to increase defense spending and promote rearmament.

Specifically, Biden plans to make “one of the largest investments in our national security in history, with the funds needed to ensure that our military remains the best-prepared, best-trained, best-equipped military in the world.” What that translates to is approximately $31 billion in new defense spending, which will bring total national defense spending up to $813 billion. $6.9 billion of this is earmarked for NATO, European defense, Ukraine, and countering Russian aggression, according to the White House.

Meanwhile, President Biden and other capitalist politicians claim that there is no money for healthcare, education, or other social spending that would benefit the working class, but we will always have the money — hundreds of billions of dollars to be exact — to violently maintain capitalist interests abroad.

That’s why these budgets, and the bipartisan support they receive, reflect how imperialism is not simply a matter of “policy” or “out of particular malice,” as Lenin explained, but is an integral part of ensuring that U.S. imperialism can lean on violent methods to ensure more profits for capitalists and maintain its hegemony in the world. Rather than defending the “American people,” Biden’s military budget is meant to send reassurances to American corporations while firing warning shots to China and Russia.

Is Biden Really Biting Back at Billionaires?

In an effort to reduce the federal budget deficit of more than $1 trillion over the next 10 years, which is no doubt bloated by the massive amounts of military spending, Biden is also introducing tax measures meant to target the wealthiest Americans and curry favor with progressive voters.

Concretely, Biden is proposing a 20-percent minimum tax rate on the highest incomes and increases in their wealth (but not their wealth itself) of the top 0.01 percent of earners and households worth more than $100 million. He is also proposing raising the corporate tax rate from 21 to 28 percent. Before the corporate tax rate was reduced to a 21 percent flat rate under the Trump administration, it was a tiered system which ranged from 15 to as high as 39 percent depending on taxable income. So, in the end, for the rich who actually pay taxes, a 28-percent rate might not even amount to a significant difference even compared to the pre-2016 tax scheme.

In any case, while higher taxes on the rich would be welcome, the capitalists and their representatives in government will likely do everything possible to prevent it from becoming a reality. And even if the proposal passes, no matter how the tax codes are written, it seems that capitalists always find a way to avoid paying.

Loopholes make it so that capitalists like Donald Trump, for example, pay no taxes, without even hiding their money outside of the United States. We see this happen all over the world, as the recent Pandora Papers exposed, because the rich control the state and thereby the state defends the rule of capital.

Even though we create all the wealth of the parasitic rich, and higher taxes on the rich and their wealth is worth fighting for, eventually, the expropriation of the large monopolies of industry and services and a workers’ democracy will actually bring us closer to solving the problem of inequality that’s endemic to this system.

From Defunding the Police to Doubling Down on Funding

Another one of the most alarming aspects of this budget is the increase to both State and Federal police budgets. Biden is proposing more than $32 billion to tackle “rising crime.” In the aftermath of the BLM movement, Biden and the bipartisan regime have worked diligently to repair the public image of the police. More recently, the Senate voted unanimously to withhold funds from any local government that tries to defund the police, counting on votes from Bernie Sanders, Cory Booker and Elizabeth Warren.

And far from abolishing ICE or stopping the construction of Trump’s border wall, Biden is handing the agency $8.1 billion, with an additional $15.3 billion for Customs and Border Protection, $309 million for border security technology, and $19 million for border fencing and other infrastructure.

These funds, along with the increases in defense spending, highlight the capitalists’ need to strengthen the repressive apparatus that targets workers both abroad and at home. Clearly, Biden is no lesser evil: he holds up the same capitalist, imperialist system that represses and exploits workers around the world.

The Budget Reflects Urgent Priorities for the Struggle Against U.S. Imperialism

This record-setting imperialist budget is just the latest example of the dangerous realities of a world marked by capitalist crises and reactionary wars and conflicts that workers end up paying for with their lives and their pocketbooks. These budgets reflect the interests of the people who write them, whether they are Democrats or Republicans; both parties reinforce ruling-class interests.

Obscene military spending will not end until working people in the United States, here in the heart of imperialism, denounce the bipartisan funding of the Pentagon and take the struggle to the streets and our workplaces where we have social power — not just the ballot box. Now more than ever, with the war in Ukraine and an economic crisis that risks spiraling into a deeper crisis, we need a militant movement that connects the fight against capitalism to the fight against the war machine that is so central to U.S. capitalist profits. $813 billion is not just an abstract number — every penny will go to make life worse for members of our class abroad and maintain capitalist domination at home.

That’s why we say: Down with Joe Biden’s military budget! Not a single penny for their imperialist wars! Not one person and not one cent for militarism!