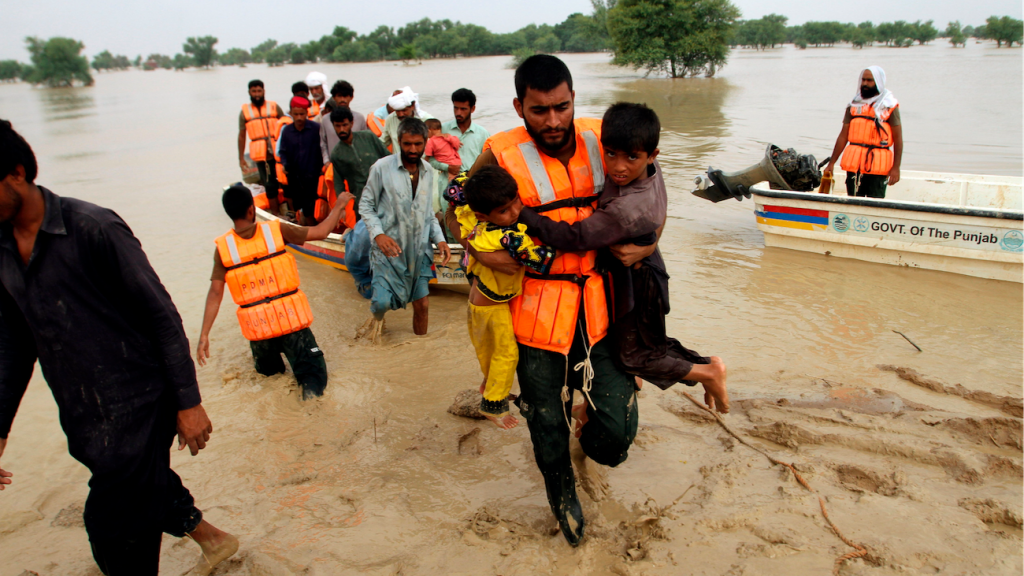 Devastating floods are occurring across Pakistan due to monsoon rains. Since June, more than 1,000 people have been killed by floods, with thousands more being displaced and having to go without food. Capitalism makes these disasters the new normal, with workers, particularly those of the Global South, bearing the brunt.

Just this weekend, tens of thousands of people have had to flee their homes in Northern Pakistan due to floods. There are many more that still need to be rescued. More than 33 million people have been affected over the past few weeks, millions of homes have been destroyed, and infrastructure such as roads and bridges have been damaged or destroyed along with millions of acres of farmland.

This is not merely just one or a few bad storms. Climate change is ravaging our planet, with those in the Global South being affected disproportionately. Pakistan usually has three to four cycles of monsoon rain, but this year it’s already in its eighth, with the possibility of another cycle in September. Balochistan and Sindh, two of the hardest hit provinces, have received 400 percent more rains than the 30-year average. So far this year, rainfall is 780 percent above average levels and has surpassed the levels of rain from the catastrophic floods of 2010.

“Pakistan is living through a serious climate catastrophe, one of the hardest in the decade. We are, at the moment, at the ground zero of the frontline of extreme weather events in an unrelenting cascade of heat waves, forest fires, flash floods, multiple glacial lake outbursts, flood events, and now the monster monsoon of the decade is wreaking nonstop havoc throughout the country.”

The government declared a state of emergency, and army and rescue workers have been deployed to rescue and evacuate people, set up flood relief centers, and provide aid. Rescuing those in remote regions has been difficult due to the lack of infrastructure. Because of the country’s lack of resources, officials have asked for international aid. The government has received criticism for being unprepared for the disaster, due to the lack of infrastructure and rescue and relief protocols.

Pakistan has been forced to implement austerity measures so that the IMF releases bailout money, so that they don’t have enough money and resources to serve their own people in times of crisis. This shows how imperialism creates even worse conditions for semi-colonies; Pakistan and other nations in the Global South are underdeveloped (and polluted) because their entire economies are based on providing for wealthy, imperialist powers.

These floods are only one example of the disasters wrought by climate change. From the current record drought in China, to the record-breaking heat wave in Europe earlier this summer, we are already seeing the devastating effects of climate change. Capitalism cannot solve climate change, where the insatiable drive for profits is prioritized above human lives. Fighting for tepid reforms is not enough. We need to fight for a socialist system where human needs and the planet are taken care of, not destroyed for the profits of a few. Flooding is becoming increasingly common and disproportionately harms working class and oppressed communities. We need to nationalize and redirect resources to build infrastructure that can withstand flooding and provide aid to communities displaced and harmed by the ravages of climate catastrophe.