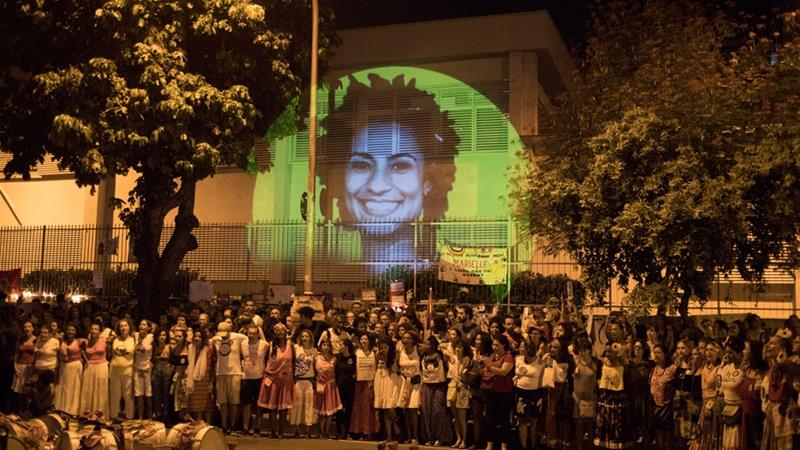 A recent report from Brazil’s Jornal Nacional shows the entrance records of right-wing Brazilian President Jair Bolsonaro on March 14, 2018, the day a prominent Brazilian councilwoman and anti-police brutality activist Marielle Franco was murdered. The records show that Elcio Vieira de Queiroz—one of the two former police officers arrested in connection with the murder of Franco and her driver, Anderson Pedro Gomes—told a doorman that he was a visitor of Bolsonaro’s.

The doorman of the gated community said that when he called Bolsonaro’s house to check de Queiroz’s credentials, someone who sounded like Jair Bolsonaro authorized the visit. According to the report, de Queiroz then entered the compound and, rather than going to the Bolsonaro residence, went to meet with the second suspect in the murders, Ronnie Lessa, who lived in the same residential complex.

This newly discovered evidence could link Bolsonaro more closely with the murders. Bolsonaro claims that he was in Brasília on the day that Franco and Gomes were assassinated. However, because de Queiroz named Bolsonaro in order to enter the compound and Bolsonaro has claimed on numerous occasions that he never met him, the Supreme Court of Brazil is obliged to investigate the link.

Despite Bolsonaro’s claims to the contrary, the personal and professional links between Bolsonaro and the suspected assassins go beyond what was recently reported. Both Lessa and de Queiroz have been pictured with Bolsonaro on two separate occasions. Bolsonaro’s son Carlos Bolsonaro reportedly dated the daughter of one of the suspects.

Beyond being acquainted with the suspects in Franco’s murder investigation, the Bolsonaro family has had friendly relations with other members of Brazil’s paramilitary groups. Bolsonaro’s other son, Flavio Bolsonaro, previously employed the wives and mothers of members of paramilitary gangs. In the past, Bolsonaro has also praised vigilante gangs and unsurprisingly, after Franco was killed—Bolsanaro was one of a small number of elected officials to refuse to publicly condemn the murders.

In response to the growing body of evidence, Bolsonaro went on Facebook Live at 4 AM, hours after the news report, to share an unhinged reaction to the events from Saudia Arabia, where he is currently on a diplomatic tour. During the tirade, he accused the news of spreading lies about him. Bolsonaro has ordered the doorman to give a new witness statement to Sergio Moro—the former judge who helped oust President Dima Rousseff, imprison former President Lula, and who is now Minister of Justice in Bolsonaro’s government. Bolsonaro also threatened Globo, the prominent Brazilian network, with the non-renewal of its public TV license, saying they engaged in “rotten and unscrupulous journalism.”

“You rascals, you scumbags! This will not stick!”…I have no reason to kill anyone in Rio de Janeiro,” the president shouted during the broadcast.

Since Franco’s murder over a year ago, Who killed Marielle? has become a rallying cry against the growing right-wing in Brazil and the police militia that murder with impunity. Franco frequently denounced police brutality in public, making the growing links between state agents, including police and paramilitary gangs, and her execution particularly suspicious.

The unresolved crime that took the lives of Marielle Franco and Gomes provoked an enormous international response. As an openly queer Black woman, feminist and member of the Socialism and Liberty Party (PSOL), Franco’s death shed light on the pervasiveness of state-sanctioned violence against Afro-Brazilian women and LGBTQ+ Brazilians. Six in ten Black women in Brazil are murdered by police. A 2017 report by Grupo Gay da Bahia also showed that Brazil “has the highest rates of trans-related murders in the world—about 16.4 percent higher than any other country.”

This pattern of violence is only one part of a broader trend of attacks on the working class, in particular women, people of color, and queer folks. In recent years, Brazil has experienced an institutional coup d’état coordinated by the right-wing, the appointment of a U.S.-trained judiciary, and media monopolies. This coup replaced President Dilma Rousseff with Michel Temer, whose administration swiftly implemented vast austerity cuts and pro-business labor reforms even before Bolsonaro’s right-wing government took power. In effect, the austerity measures backed by US imperialism have created a dire economic situation which attacks Brazilians, especially those in oppressed groups, everyday.

The state is responsible.

Human rights organizations, Franco’s own political party the PSOL, and her partner have been denied information about the investigation for years. Monica Benicio, Franco’s partner, recently wrote a public letter denouncing the fact that she is forced to find out information about Franco’s murder from the press.

It has been over a year since Marielle’s murder and still, it is not clear who is behind it. Nevertheless,the connection to the Bolsonaro family strengthens with each new development in the case. Amidst a backdrop of growing public outrage and the state’s sluggish response, we demand answers and call for an independent investigation to hold whoever ordered this politically-motivated crime responsible. The fact that this investigation has been going on for two years with so few answers points to the fact that the state does not want a complete investigation; it does not  want the truth of who killed Marielle Franco to come out. That is because it is the state that is responsible for her murder.