This Pride month and beyond, against the attacks on LGBTQ+ rights, the rights of trans youth and the right to bodily autonomy, we fight with all our strength for queer liberation. 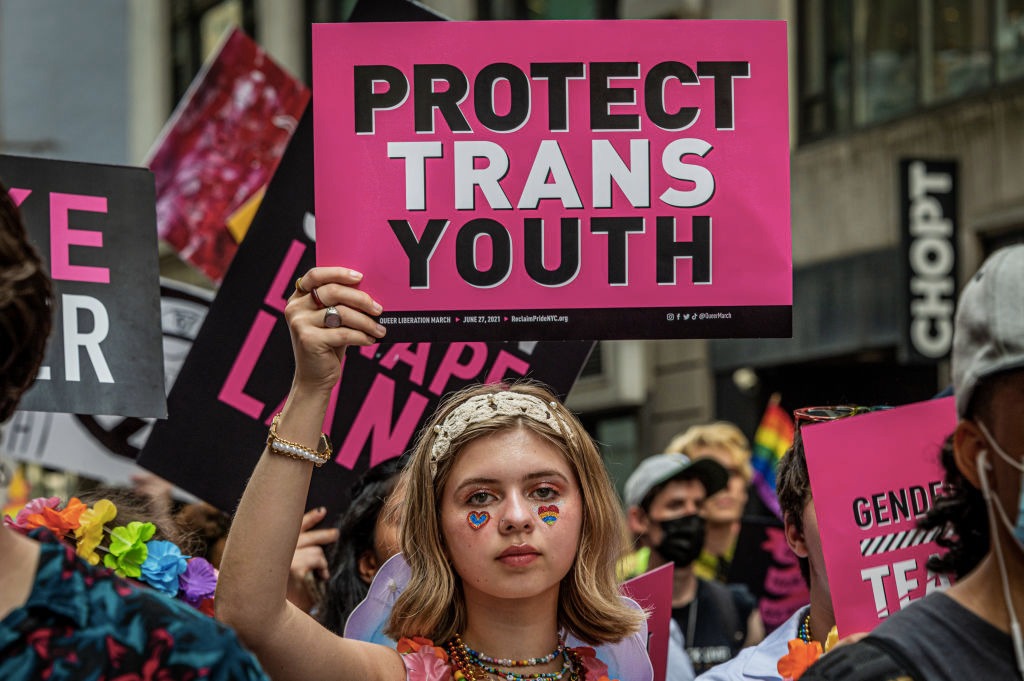 This Pride month is unlike the others.

We are facing a moment of unprecedented roll backs of victories won over the last 50 years. Attacks on queer people and queer rights are mounting as the right wing advances their political agenda of limiting our right to our bodies. Over 300 anti LGBTQ+ pieces of legislation have been put forward in state legislatures across the country. Many have passed. Many of these laws specifically target trans children and their ability to access healthcare, play sports, and even go to the bathroom. One especially horrific policy in Texas deems gender affirming healthcare as child abuse and demands that trans children be separated from their supportive parents.

They are going after the children, the brave kids who stand in their truth.

It’s hard to be a kid in a heteronormative and cis-normative society, especially facing the isolation, the fear, and the bullying. Being a kid comes with a degree of helplessness: your life is in the hands of authority figures who may or may not accept you, and many are increasingly a part of the latter.

In the last 50 years, we’ve fought and gained a tiny amount of space and acceptance for queer people through more rights, more support for our rights and a little bit of media representation. Now, we face a furious reaction against that tiny sliver of rights that we won.

This should make us all deeply enraged.

The attacks on queer rights come alongside the massive attack on reproductive rights — on the right to an abortion. While some would like to paint this as an issue for heterosexual women and separate these struggles, that’s simply not true. The attacks on abortion rights are also attacks on queer people, many who are also able to get pregnant.

Furthermore, the leaked Supreme Court opinion that is poised to overturn Roe v. Wade also indicates that some justices want to go further, and are interested in overturning other decisions that were the foundation for rights won by queer people, including the right to same sex marriage and the legalization of “sodomy”. In this sense, this Pride month, we need to fight against the attacks on the right to an abortion with all our strength as overturning Roe will have deadly affects on queer people, even those who will never need access to abortions.

These attacks fly in the face of what we’ve been told about the struggle for rights. From journalists to politicians to history textbooks, many paint the historical struggle for liberation as a ladder, where rights are won and regressive attitudes are tossed aside as history moves forward. This isn’t true for queer folks, and it’s not true for anyone else. It’s not true for women’s rights, or for the rights of Black people in this racist society. As we are currently seeing, in capitalism —a system built on exploitation and oppression — no victory is permanent. They concede our rights one day and they yank them away the very next.

An increasingly right-wing Republican Party, emboldened and shaped by Trumpism, is leading the charge in attacking our rights and the rights of other oppressed groups. They are attacking voting rights, the right to an abortion, the rights of trans youth and the ability to teach about America’s racist history in schools. They are leading a rabid backlash against a generation that is queer, that wants to unionize, and that says that Black Lives Matter.

The Democratic Party, on the other hand, is more than happy to paint themselves in rainbows every Pride Month and talk about their pronouns as a sign of their “wokeness” when they want votes. But not only are the Democrats, with their majority in two of three branches of government, doing nothing to fight back these attacks, they are also leading attacks on our rights. Across the country, Democrats have been increasing police budgets and explicitly speaking out against defunding the police (ahem, Joe Biden’s state of the union). They are also locking up migrants at the border and Black and Brown people in prison. This Pride month we remember Roxanna Hernandez, and Victoria Arellano who died due to the horrendous conditions at ICE detention centers in the Trump and Obama administrations, and Layleen Polanco, who died at Rikers prison in New York City.

We are going backwards on queer rights, on women’s rights, on bodily autonomy in general, and both parties have gotten us here.

And while the corporations pander to us, painting rainbows on their products, rainbow capitalism is just a façade to cover up the brutal exploitation of the workers in sweatshops who produce these products. Starbucks stands as a clear example — although they wrap themselves in rainbow colors every Pride month and talk about standing for LGBTQ+ rights, the company is currently engaging in disgusting union busting and have especially been targeting queer people.

Rainbow capitalism means liberation for the few at the top — for those who are wealthy and white enough to purchase their way to safety and security, and great queer friendly summer vacations in the Zionist state of Israel, or a tropical island that owes billions of the IMF, ensuring poverty and desperation for the vast majority of queer people. Rainbow capitalism means that elementary schools that cost over $50,000 a year to attend have a rainbow-themed Pride month celebrations while teachers are getting fired for even mentioning that they are queer and letting students reflect on their own identities.

We need to stand up and fight. No one is going to do it for us.

This Pride month should be a Pride month of rage and struggle. Of taking up the spirit of Stonewall — of standing up, fighting back, throwing bricks at the cops, and organizing in the streets.

With all the rainbow cops and businesses, we have become unaccustomed to the struggle. As we wrote a few years ago, “No other group has gone from such marginalization to capitalist assimilation so quickly. In just fifty years, the cops went from beating, raping, and arresting us to marching in our parade.”

We have been led to the idea that our rights will be won in a straight forward line, accumulating rights until we reach equality. That’s not true.

We will have to fight to defend what we won, and use that strength to advance for more.

And we are a part of a new fighting generation that needs to take up that struggle. We see that in the queer folks who are leading unionization drives all over the country, from Amazon, to Starbucks, to Trader Joe’s, Target and more. We see that in our straight and cis co-workers who are also taking up that struggle alongside us, like the Starbucks worker in Minneapolis who said, “I need a union as a worker, but I know that it’s especially essential for my trans co-workers to defend their rights. That’s why I’m fighting for a union.”

We are a part of a generation that knows that Black lives matte, and that the cops have no place at Pride.

We’re a generation that rejects pinkwashing and fight for a free Palestine.

This Pride month is not like the others; it’s a month of rage, of defiance. A month to kick off a mass movement to change everything.

If you would like to join Left Voice’s month of Pride-related activities, sign up here. We also encourage folks to submit articles to [email protected]