A commemorative plaque at the spot where Rosa Luxemburg was murdered has been defaced with white spray paint. There are similarities to the attack on the grave of Karl Marx in London ten days ago. 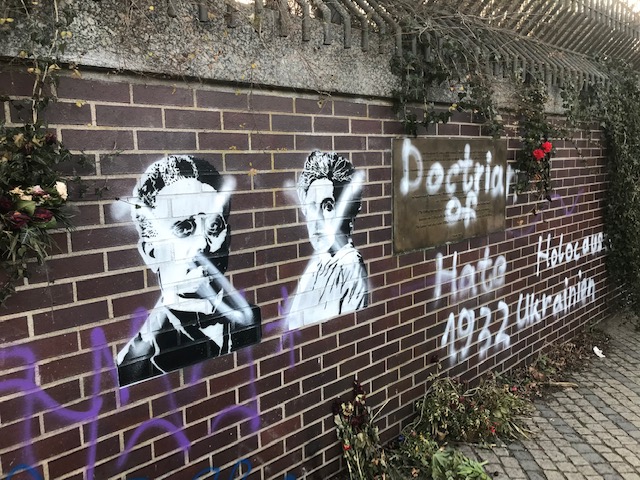 Unknown persons have defaced the memorial for Rosa Luxemburg at the Landwehr canal in Berlin. A plaque and sculpture there commemorates the spot where communist leader Rosa Luxemburg was murdered in 1919. The wall, which also shows portraits of Luexemburg and revolutionary leader Karl Liebknecht has been covered with the slogans: “Doctrian (sic) of Hate” and “Holocaust 1932 Ukrainien (sic).”

This follows an earlier defacement of the grave of Karl Marx at Highgate Cemetery in London, which was covered with similar slogans ten days ago. This is apparently some kind of international campaign to blame communist thinkers for the famine in Ukraine in 1932, known as the “Holodomor.” It is noteworthy that they have declared two Jewish communists to be responsible for policies in the Stalinist Soviet Union that took place years after their deaths.

Vandals back at Marx Memorial, Highgate Cemetery. Red paint this time, plus the marble tablet smashed up. Senseless. Stupid. Ignorant. Whatever you think about Marx's legacy, this is not the way to make the point. pic.twitter.com/hGKBMYGWNy

This is the second attack on Marx’s grave in two weeks. At the beginning of February, the marble had been damaged with a hammer.

Rosa Luxemburg was murdered on January 15, 1919 by the proto-fascist Freikorps under orders of the Social Democratic government. Since 1987, a sculpture with her name stretches out of the water on the spot where her body was thrown into the canal, alongside a plaque with information about her.

Every year, tens of thousands of people commemorate Luxemburg and her comrade Karl Liebknecht who was murdered alongside her. Because of the 100th anniversary of the assassination, there were even more red carnations than usual.

The reactionary graffiti was discovered by this author on Monday afternoon while visiting the site alongside socialist feminist Andrea D’Atri, who is in Berlin for a book presentation.