Bernie Sanders and Alexandria Ocasio-Cortez are the most prominent self-described socialists in the U.S. right now. But can they be socialists without opposing U.S. imperialism? 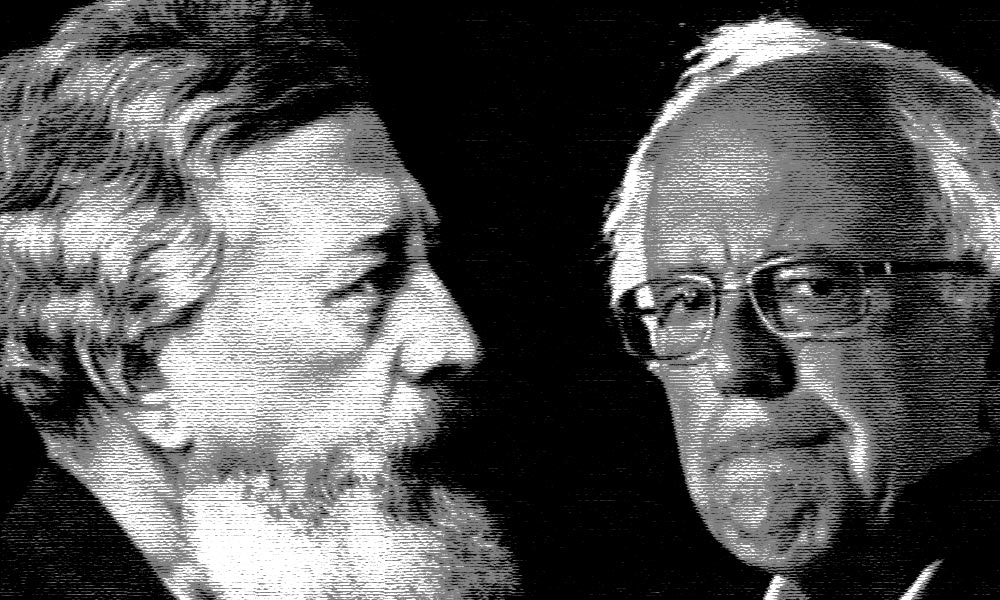 “Not one man and not one penny for militarism!” This was the title of a flyer, written by Wilhelm Liebknecht, for the German elections of 1887 (in German). It expressed the attitude of the Social Democratic Party (SPD) to the capitalist state and its military: absolute, uncompromising hostility. Every single year, the SPD’s members of parliament voted unanimously against the government’s budget. This fundamental, working-class opposition to the state was, however, no obstacle to the party’s growth. The SPD won 10% of the votes in 1887, growing to almost 35% by 1914. It was only when the party compromised on its principled opposition to war, voting in favor of the government’s war credits in 1914, that the SPD collapsed.

With a few small changes, Liebknecht’s slogan could be the motto of the socialist movement today: Not one person and not one cent for imperialism!

Unfortunately, the most prominent U.S. politicians who consider themselves socialists—Bernie Sanders and Alexandria Ocasio-Cortez—have not shown such a principled attitude to questions of militarism and imperialism.

When the imperialist offensive against Venezuela intensified on February 23 of this year, all socialists had a duty to oppose it. Sanders and AOC, however, spoke out in support of “humanitarian aid” and “democracy.” By echoing the main talking points of Trump’s coup plotters in Washington, they were legitimizing the plans for regime change.

In March, AOC said she was “concerned about U.S. interventionism in Venezuela,” particularly under the leadership of the war criminal Elliot Abrams. By May, however, she had backpedalled, saying she would “defer” to “caucus leadership”—and the leader of the  Democratic Caucus inthe House, Nancy Pelosi, is an ardent supporter of imperialism. (Some of AOC’s supporters have claimed she was actually referring to the Progressive Caucus in the House, but no such explanation has been put forward by the congressperson.)

In the case of the endless U.S. occupation of Afghanistan, AOC tweeted that the U.S. “could have leaned more on the larger role of other agencies (intelligence, state dept, diplomatic teams, etc).” But it was U.S. intelligence services that originally propped up Islamic fundamentalists in Afghanistan to fight against the Soviet Union.

And of course, supporting imperialism is nothing new for Bernie Sanders. As numerous commentators have pointed out, Sanders has voted in favor of just about every war of aggression by the U.S., including the wars on Yugoslavia and Afghanistan. While he was an opponent of U.S. support for right-wing death squads in Central America in the mid-1980s, as the New York Times pointed out in a recent red-baiting article, for the last 30 years Sanders has consistently voted to fund the Pentagon and its wars, and is a staunch supporter of the F-35 jet fighter – which, at a cost of over a trillion dollars, is the most expensive weapons program in history! When protestors occupied his office in 1999 in opposition to the war against Yugoslavia, Sanders had them all arrested. And while he has recently adopted a slightly more critical tone towards Israel, he has been a staunch defender of that apartheid regime.

Sanders also calls for a “strong military,” even if he wants it to be slightly cheaper. On the question of borders, however, he has no such reservations. He has come out unequivocally against open borders, even voting in support of a border wall.

The positions of Sanders and AOC represent what Marxists call social chauvinism. They are, as Lenin said: “socialists in words but chauvinists in deeds.” They claim to want better conditions for U.S. workers but are seemingly unconcerned or unwilling to address the increased exploitation of workers around the world. This view of immigration is, however, a dangerous illusion, since restrictions on immigration do not benefit workers. Restricting “illegal” immigration only ensures that there will be a strata of super-exploited workers driving wages down for everyone. As a consequence, this kind of xenophobia only divides the working class, and weakens its collective ability to fight the bosses. As Friedrich Engels wrote, “A people which oppresses another cannot emancipate itself.”

The socialist movement has always fought against borders and for equal rights for workers around the world. It is only by uniting across all borders that we can beat the capitalists. The Communist International, for example demanded in 1920 that every communist party:

Must ruthlessly expose the colonial machinations of the imperialists of its “own” country, must support—in deed, not merely in word—every colonial liberation movement, […] inculcate in the hearts of the workers of its own country an attitude of true brotherhood with the working population of the colonies and the oppressed nations, and conduct systematic agitation among the armed forces against all oppression of the colonial peoples.

U.S. interventionism directly harms the global working class and the movement for socialism everywhere. The bloody repression of the left in South America in 1970s, organized by the CIA, stopped revolutionary processes in different countries. The support for reactionary dictatorships in the Middle East strengthens the global dominion of the U.S. bourgeoisie. The imposition of austerity policies and free-trade agreements on smaller countries pushes down the wages of whole countries, enabling U.S. corporations to take advantage of extremely low labor costs (or use the threat of relocation to exact concessions from unions in the U.S.)

It was not by accident or due to a utopian abstraction that Marx, Engels, Lenin and Trotsky envisioned socialism as a global project. In fact, Stalin’s doctrine of building socialism in one country showed to be a total failure. There is no future for socialism unless it is at a global scale. Of course, pursuing a nationalistic program is not a problem if your project is limited to expanding welfare provisions and making the U.S. look more like European Nordic countries—at the expense, to a larger or smaller degree, of workers’ well being in other countries.

Socialists who support Sanders and AOC should understand that they are also supporting their positions on imperialism. Seth Ackerman’s “A Blueprint for a New Party” contains a vision of electing socialists via the Democratic Party, with them remaining “accountable to the membership, and pledged to respect the platform.” This is a very first test for this strategy: AOC is, in effect, ignoring the DSA’s position on U.S. interventionism in Venezuela, and there is not accountability at all. (Not to imply that the DSA itself has clear positions on opposition to imperialism, open borders, etc.) Is there any reason to believe that Sanders will be more responsive? Even Socialist Alternative, coming from a Trotskyist tradition, have offered lukewarm criticisms of Sanders that seem to have had little effect on their enthusiasm for the candidate they continue to claim is leading a “political revolution.”

Other forces on the left think that anti-imperialism means giving political support to bourgeois regimes in semi-colonial countries, like Assad in Syria and Maduro in Venezuela. But this is not the case. In Venezuela, for example, socialists oppose the coup attempt of the U.S. government, but do not give any political support to the anti-worker, Bonapartist regime of Maduro. The working class must organize as an independent political force to lead the struggle against imperialism.

Imperialism and socialist support for the U.S. state is not a secondary issue or a “merely” theoretical question. Without a clear and consistent program of resistance to U.S. imperialism, and thus the U.S. government more broadly, the emancipation of working people is impossible.

In other words, US socialists must unequivocally and without compromise, oppose the U.S. government, including the State Department Socialists who support it. As Karl Liebknecht, son of Wilhelm, put it during the First World War: The Main Enemy Is at Home!