Amid fuel shortages, rising inflation, militarization, and further austerity measures, new protests broke out Saturday in Sri Lanka’s capital, Colombo. The working class should not pay a single cent for the mounting social and economic crises. 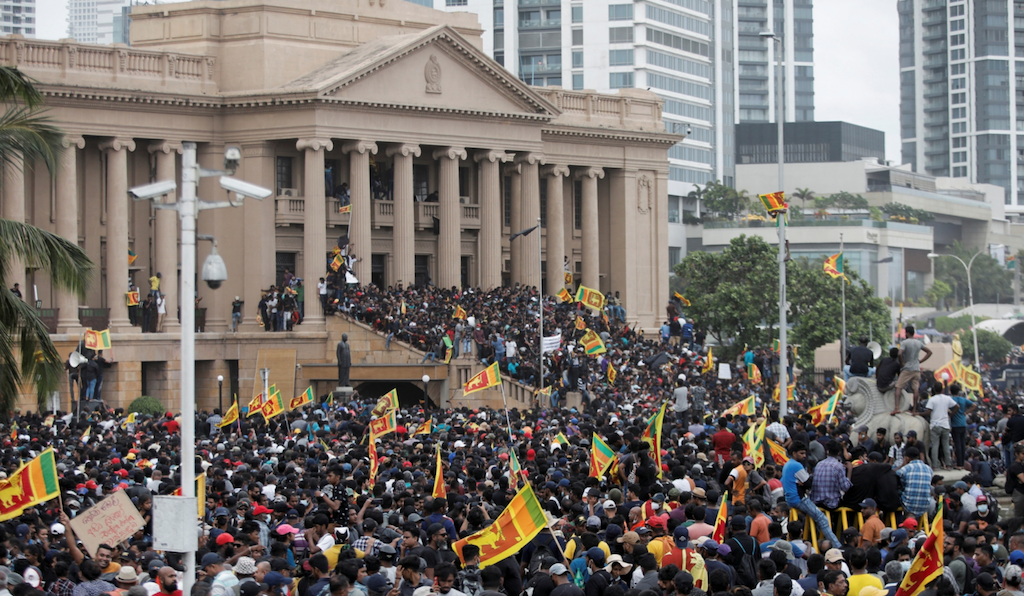 Tens of thousands of protesters stormed President Gotabaya Rajapaksa’s office and residence. The protesters broke the security perimeter surrounding Rajapaksa’s official residence while the police used tear gas to prevent entry. Rajapaksa was said to have left earlier on a naval ship.

In response to this escalation, Rajapaksa offered his resignation, as did the Prime Minister Ranil Wickremesinghe.

The growing protests in the country are taking place against the backdrop of one of the worst economic crises in Sri Lanka since its independence in 1948, resulting from the depletion of foreign currency in international reserves and heavy indebtedness. An import-dependent country that relies heavily on tourism for its economy, Sri Lanka’s foreign reserves are now depleted and the country has declared bankruptcy, leaving it unable to purchase essential commodities from the global market. Since earlier this year, the country has severely restricted imports on what it deems “non-essential,” including milk products like butter, cheese, yogurt, fish, and fruits. Meanwhile, the country also has a massive foreign debt burden to repay.

Tension and discontent increased on the island at the end of March, when the authorities imposed power cuts of over 13 hours in the face of a fuel crisis, which led the population to take to the streets to demand the resignation of the Sri Lankan Executive.

Since then, hundreds of demonstrators have settled in the vicinity of the Presidential Secretariat in Colombo. Protests around the island nation have become commonplace and increasingly repressed, as the police and state forces have attempted to impose a crippling curfew with all its might.

Meanwhile, the government has been trying to reach a bailout agreement with the IMF behind the backs of the working class. This agreement would include drastic and far-reaching structural reforms, like austerity in state expenditures, the elimination of the duopoly in the energy sector, the end of import restrictions, the increase of indirect taxes and the privatization or sale of state enterprises. In anticipation of the bailout, the Rajapaksa government further devalued the currency, leading to higher inflation.

The mobilizations are part of a deepening social and economic crisis across the globe. Supply chain disruptions and the war in Ukraine have increased inflation and food shortages, which have, in turn, provoked strikes in Europe and the United States, as well as rebellions in countries like Ecuador and Iran. Ukraine and Russia are important geopolitical allies for Sri Lanka, especially for tea exports and fuel imports.

Amid the crisis, Sri Lanka’s opposition parties have joined the calls and led the charge for the current government to resign. In reality, they pose no real solution for the working people of the country. The debate among the political caste over the question of the foreign debt is limited to whether to refinance or completely restructure the whole debt. Both these solutions only represent more misery for Sri Lankans, especially because they both mean more austerity measures that will further squeeze the working class.

It is increasingly important for Sri Lanka’s foreign debt — and the debt of all countries affected by the IMF’s imperialist exploitation and extortion — to be canceled. To carve a real solution out of this crisis, it is urgent to break the agreement between the imperialist and national bourgeoisies. The working class should not pay a single cent for this crisis.