It’s official: the officers who killed Breonna Taylor will not be charged. While tragic, this is not surprising — the police, capitalism’s guard dogs, protect capital and the status quo and are therefore protected by the system they serve. Justice for Breonna Taylor and other victims killed by cops will not come through the courts. We must continue to protest and we must strike. We need to take action against racist cops and the capitalist system the institution of policing serves to protect. 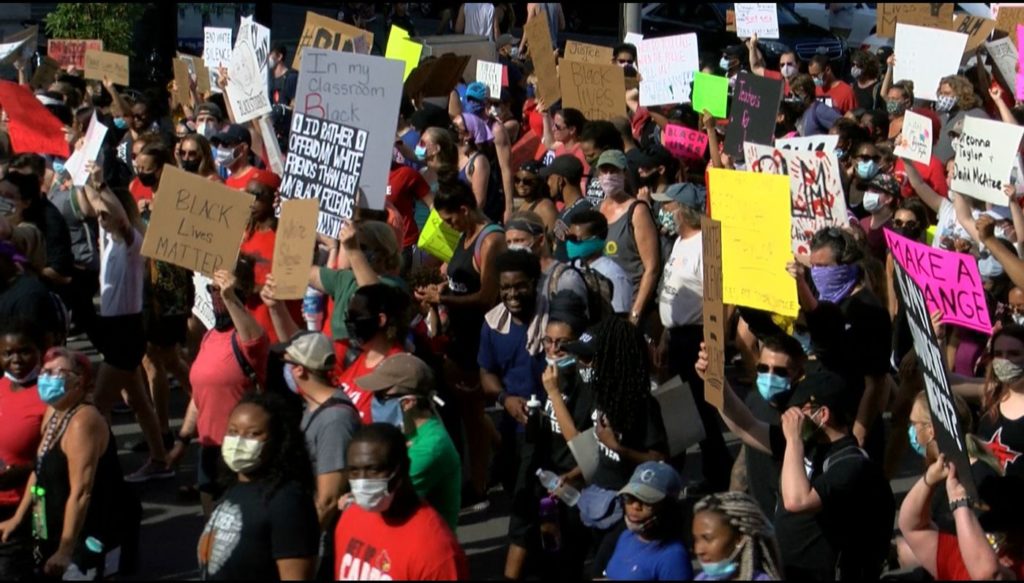 Breonna Taylor, Breonna Taylor, BREONNA TAYLOR. Another soul added to the long list of lives taken by the blood-soaked hands of the racist police. At this point it is clear: justice for Breonna — or anyone killed at the hands of police — -will not come through the courts, the cops themselves, or the Democrats. There is no point in asking nicely for this continued state violence to end. We must be in the streets disrupting business as usual. More than that, though, we must disrupt the gears of capitalism by withholding our labor. We must strike against racist police violence and for Breonna Taylor.

The establishment happily ignores our protests, but they won’t be able to if we shut everything down.

Official Ruling: No Justice for Breonna

It has now been more than six months since Breonna Taylor, a 26-year-old Black EMT, was gunned down after being awakened while in bed with her partner. On March 13, cops stormed Breonna’s home, with a no-knock warrant that Louisville Attorney General has refused to verify, allegedly searching for a suspect who had already been arrested. Grand jury evidence reveals that they ended up firing 32 rounds at Taylor and her partner six which hit Breonna and killed her.

On Wednesday, Kentucky’s Republican Attorney General Daniel Cameron announced that a grand jury had decided not to charge any of the officers for Breonna’s murder. One detective, Brett Hankison, was charged with three counts of wanton endangerment for shooting into one of Breonna’s neighbor’s walls — a Class D felony in Kentucky that carries a maximum five-year sentence. In other words, none of these charges even acknowledge Breonna’s murder. To the state, her life does not matter — but a neighbor’s wall does.

Since Breonna’s killing reached national media, images of her and others killed at the hands of police have continually been used for anything and everything other than jailing the killer cops. Breonna’s image has been used to sell magazines and promote documentaries, but the system is unwilling to take even the most basic step of charging killer cops with murder and sending them to jail.

That’s why we have to take the fight into our own hands. The courts are doing exactly what they are meant to do: protect the cops and the capitalists. We’ve seen this time and again, and now we are seeing it unfold in Breonna’s case. That’s why we need to rise up.

Democrats Are Not the Answer

In the eyes of the Democrat Party, rise up simply means “vote Blue” in November. Politicians such as Joe Biden claim Donald Trump and the Republican Party are the problem. He continually repeats, “This is not who we are” and “this is not what we do.” — as if racism and racist police murders did not exist prior to Trump’s presidency. The Democrats would love for you to forget that he is a racist who, like Trump, also loves police brutality and played a central role in creating the system of mass incarceration as we know it today.

Meanwhile, Democratic politicians around the country continue to suppress mass mobilizations to condemn police violence with their own violence. They do not want change; they simply want more stability for a racist capitalist system that continues to assault working-class and oppressed people. Trump only serves as a mirror that exposes the racist, corporatist, imperialist rot central to America’s very being. Democrats helped ferment this rot, and a change in leadership will do nothing to address BIPOC continually being gunned down by racist guard dogs of capital, the police.

We Must Strike Against Racist Policing and Capitalism

The institution of policing exists to protect private ownership of the economy, the property of rich people, and the status quo. As part of these responsibilities, cops have been given the right to terrorize, brutalize, and kill members of the public, particularly Black, Brown and Indigenous members. Oppressed people— indeed all of us — must be protected from state violence.

Ending police brutality requires nothing short of mobilizing the working class to disrupt directly the gears of this racist capitalist system that depends on police violence to continue reaping profits. Mass uprisings of predominantly BIPOC youth have already begun this fight. To impose a real threat on the system, mobilizations must extend deep into our workplaces. We must take back our houses of labor — our unions — and push them to strike against police terror.

We can do this by organizing within the rank and file to fight the critical obstacle in our unions: the spineless union bureaucracy — agents of the bourgeoisie — that is focused on electing a senile, racist, rapist rather than stopping police violence.

At the same time, we must continue our fight to kick cops out of our labor unions and confederations, even when union officials continue to promote the utter falsehood of “brotherly ties” between labor and cops. Cops are not workers; they are enemies of the working class and the oppressed. Pig unions shield killer cops from even minimal consequences for their brutal actions.

Finally, in addition to disrupting in the streets, we must do the work of organizing our workplaces, within and across sectors. We must build worker committees and assemblies to oppose the exploitative conditions under which we all work, while also preparing for mass strikes — actual strikes, not fake strikes or symbolic work actions called “strikes” by the union bureaucracy — to demand real justice for Breonna Taylor and all those killed at the hands of racist cops. Real justice means more than just charging the cops responsible for Breonna’s murder. It also means the working class organizing itself to eliminate both the racist institution that is police along with the racist exploitative capitalist system that brutalizes us all.

The entire institution of policing is a disease that plagues our society. There is no asking a disease to be nicer. The disease must be eliminated. Capitalism is an inherently exploitative system, focused on extracting profit from anything and everything possible — no matter the cost to human lives. This system is the root of mass suffering and death throughout the world. To maintain such an exploitative system, individuals must be controlled and repressed through police violence and oppression of the working class. At the same time, to maintain a society based on class exploitation, capitalism must produce racism. As Malcom X said, “You can’t have capitalism without racism.” That is why the fight to end police violence must inevitably be a fight to destroy capitalism.