Just outside Birmingham, Alabama, warehouse workers are mounting the largest unionization fight in Amazon’s history. Their victory will be a win for the entire working class. 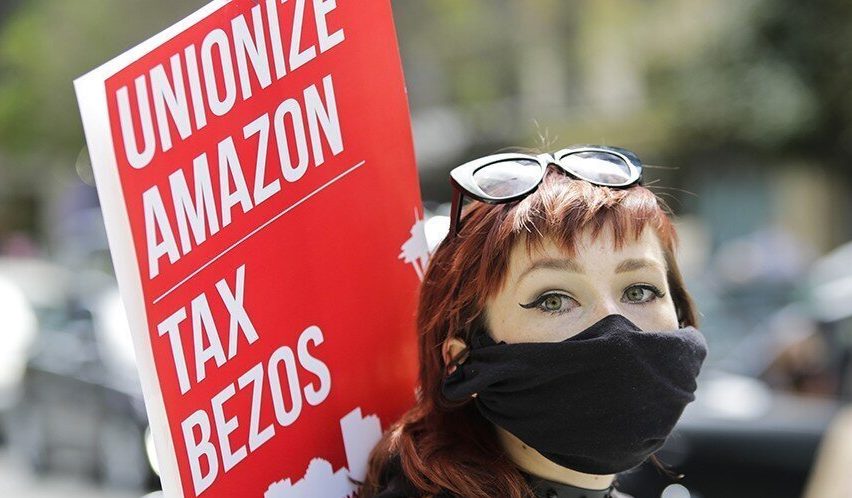 Since its founding in 1993, Amazon has been able to beat back every attempt by its workers in the United States to unionize. Elsewhere in the world, the fight for unions in Amazon warehouses has been more successful. In Italy in 2018, for example, the union Filcams Cgil was the first to bring Amazon to the negotiating table, and unions have gained a foothold in Poland and France as well.

Amazon warehouse workers in Bessemer, Alabama, however, are trying to change that. Organizers at the warehouse there reached out to the Retail, Wholesale and Department Store Union (RWDSU) last summer, in the wake of the Black Lives Matter uprising and as the pandemic was raging through Amazon fulfillment centers — what the company calls its warehouses — and across the country. On February 8, the National Labor Relations Board (NLRB), which oversees U.S. labor law, will mail ballots to 5,800 workers at the factory outside Birmingham so they can vote for or against forming a union.

In 2019, workers at a warehouse in Chicago formed Amazonians United to fight for better labor conditions. With other organizations, they helped organize a sickout of hundreds of workers at Amazon, Target, Whole Foods and elsewhere on May 1 of last year, protesting the lack of basic protective gear and other safety measures in the pandemic.

Unionization at the Bessemer facility would be a significantly bigger step: it would cap the biggest unionizing struggle of its kind in Amazon’s history.

Amazon has been fighting its workers’ attempts at organizing tooth and nail to guarantee its high level of profits. At Bessemer, management is demanding the union vote be held in person at the warehouse — a ploy to intimidate the workforce during the pandemic and (as one union busting law firm points out) a result of the fact that mail-in ballots make it harder for management “to dissuade workers from supporting unionization ahead of an election.” That move was shot down by the NLRB. But Amazon is still fighting the use of mail-in ballots for the union vote.

That union-busting effort is hardly an isolated incident. Amazon routinely fires workers who lead organizing efforts against it. When Amazon fired Chris Smalls for leading a protest against the lack of safety equipment during the pandemic at the Staten Island warehouse, the company planned a smear campaign on social media to discredit him and intimidate other workers. In 2018, when workers in the Amazon-owned Whole Foods chain announced they wanted to unionize, the company distributed “training videos” with tips for local managers on how to get around the already-flimsy NLRB rules protecting organizing efforts.

Amazon has made it regular practice to spy on its workers to sniff out worker resistance. This ranges from stalking social media accounts to hiring spies from the notorious Pinkerton firm to trail and report on what workers are doing and saying at work. Well beyond its workplaces, Amazon constantly tracks progressive social movements — climate activism, for example, and the Yellow Vest movement in France — to analyze them for possible threats to their profits and facilitate pre-planning. These tactics are used by the company across the globe, from the United States to the Middle East, Asia, and Australia.

The cynicism of management’s naked fight for profits may be clearest at Bessemer. Amazon created a website to convince workers there to vote against the union, and in a laughable early version of the site (before it was edited) it suggested:

Don’t buy that dinner, don’t buy those school supplies, don’t buy those gifts because you won’t have that almost $500 you paid in dues. WHY NOT save the money and get the books, gifts & things you want? DO IT without dues!

IF YOU’RE PAYING DUES … it will be RESTRICTIVE meaning it won’t be easy to be as helpful and social with each other. So be a DOER, stay friendly and get things done versus paying dues. …When we work together to improve our business and provide service to our customers, more business is generated, meaning more job security for everyone.

Meanwhile, 20,000 people in Amazon’s workforce had been infected with Covid and at least 10 had died as of last October — numbers that have surely only risen as the pandemic continues to ravage the working class. And workers repeatedly note the inhuman, “grueling” working conditions they face.

Business, though, is booming — for the bosses and shareholders. Amazon posted its highest profits ever during the worst of the first wave of Covid-19. Between July and October 2020, the company boasted of a 37 percent bump in its earnings, amounting to $96 billion. Amazon founder Jeff Bezos is the poster child for pandemic profiteering. He saw his personal wealth increase by 79 percent — an added $90.1 billion — in 2020 alone. In one day, he raked in $13 billion.

An Important Battle, with Challenges Ahead

Winning legal recognition for RWDSU at the Bessemer warehouse would be an important milestone for a U.S. working class that has been on the defensive for far too long and badly needs to rebuild its fighting power. Such a win could very well inspire more union campaigns at other warehouses — and beyond. All socialists worth their mettle owe the fight at Bessemer their fullest support and solidarity.

But winning union recognition alone will not be enough. Workers at Bessemer also face a danger from a bureaucratic RWDSU union leadership that could stand in their way.

The union represents service and healthcare workers across the country — workers on the front lines of the pandemic. As its members have gotten sick and many have died, the leadership has avoided, at all costs, organizing strike or walk-out actions for worker safety across its locals, or unequivocally championing any kind of militant action by its members to protect their lives and health.

As the crisis began to hit last March, RWDSU president Stuart Applebaum wrote an op-ed for the New York Daily News calling for more workplace safety — but offered not a word on how workers could win that safety other than by asking the bosses for it politely. In the meanwhile, the RWDSU newsletter continues to update its new section listing all the union members who have died in the pandemic.

Overall, the RWDSU leadership’s strategy seems to be to ask bosses to care more about workers, push for NLRB recognition of new union locals, and cozy up to the Democratic Party — asking for new laws, enthusiastically endorsing Democratic candidates, and donating $108,000 to the party. Since the pandemic began, its newsletter is filled with stories about the power of “public pressure” on the bosses, instead of pushing disruptive labor action.

But real power comes from a rank and file organized and ready to stop working, cutting the bosses off from the thing they care about most — profit. In other words, what gets the goods is militant action — not working with the NLRB or the Democrats. The process for certifying a union is a carnival game stacked against workers — from the weak rules that “protect” workers from retaliation to the plentiful time the NLRB gives bosses to interfere with every aspect of an organizing campaign. When bosses inevitably break the rules, such as by intimidating and firing workers, appeals to the NLRB for help take an absurdly long time, sometimes years, to be resolved — likely long after the person or people fired have moved on.

The last few years drive home the point about militant organizing. In 2018, rank-and-file teachers and other education workers went on strike across West Virginia — against both state law and their union bureaucrats — and won substantial concessions on pay and benefits. During the BLM uprising last summer, unionized bus drivers in Minneapolis, Pittsburgh, New York City, and elsewhere refused to transport police or the protesters they’d arrested, and labor’s role in the uprising was a key force in the partial defunding of some city police forces. Just this month, about 1,400 Teamsters went on strike at Hunts Point Market in New York City, the largest wholesale produce market in the world, and won important increases in pay and time off.

The capitalist Democratic Party is not the ally of organized labor. For all that they try to woo and cajole union members to vote for them, they repeatedly prove themselves to be enemies of independent, militant worker organizing and real worker power. Nevertheless, since the 1980s, the vast majority of union leaders in the United States have abandoned militant tactics such as strikes and instead try to curry favor with Democratic politicians to win concessions. And yet over those same decades, wages have stagnated and unions themselves have been steadily dismantled. The strategy of allying with the Democratic Party is an abject failure.

It’s Democrats in states such as New York that uphold laws forbidding public-sector employees from using their primary weapon — the strike. It was a Democratic administration — Clinton’s — that fought for NAFTA, which helped drive the global “race to the bottom” of labor conditions and pay and weakened U.S. labor along the way. And it was another Democratic administration — Obama’s — that ran on the promise to pass key pro-union legislation and then refused when it came into office. As of today, the Chicago Teachers’ Union, one of the more militant and active in the country, is on the brink of a strike because Mayor Lori Lightfoot, a “progressive” Democrat, is trying to force teachers back into the classroom without proper safety measures during a deadly pandemic.

Union power does not come from a Bernie Sanders statement supporting the Bessemer Amazon workers, or from Alexandria Ocasio-Cortez making appearances at picket lines. It comes from the organized, disruptive action of the rank and file. Relying on the Democrats to build worker power is suicide.

The rank and file is decisive. Union bureaucrats take a “middle” position between the bosses and the workers, accepting as their job not just to settle contracts without strikes but to guarantee a docile workforce that will “stay in line.” They do this by signing contracts with “no strike clauses” that forbid workers from using the main weapon that gives them power over the bosses.

Unions get the goods through rank-and-file organizing that’s ready and willing both to take on the bureaucrats — pushing them left, forcing them into more militant stances, and forcing more rank-and-file control of the union — and fight the bosses in a militant way. That’s a lesson that will unfold at Bessemer and beyond.

Challenges lay ahead, but the fight at Amazon is a crucial one for U.S. workers. Solidarity with the union struggle at Amazon!

This article was updated and corrected on 1/4