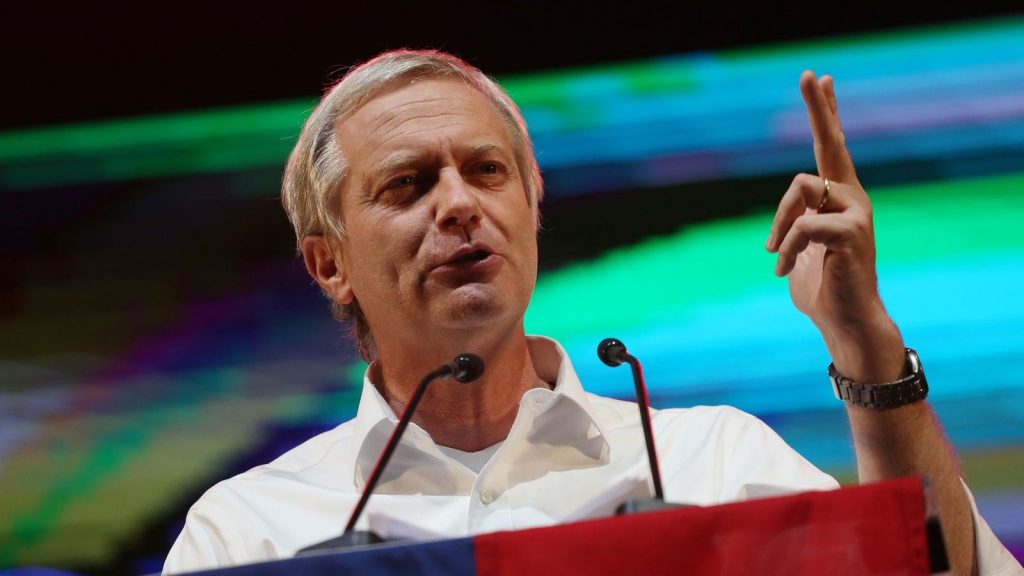 The far-right politician José Antonio Kast, an admirer of Pinochet, won the first round of Chile's presidential election.

On Sunday, Chileans voted in the first round of presidential elections. The top two candidates will face off in a second round on December 19. Neither of Chile’s main political coalitions made it to the runoff. Instead, the far-right politician José Antonio Kast got 28 percent of votes. With his attacks on immigrants and sympathy for Brazilian president Jair Bolsonaro, Kast is like Chile’s version of Donald Trump. He will be competing against Gabriel Boric, candidate of the Frente Amplio (Broad Front), who got 25 percent. Boric, a former student leader who is just 35 years old, promises to make Chile the grave of neoliberalism.

The election took place just two years after the uprising of October 2019, which brought millions of people into the streets. They called for an end to the regime inherited from the military dictatorship of Augusto Pinochet. So how is it possible that Kast, an open admirer of Pinochet, has topped the polls?

Part of it has to do with the collapse of the traditional Right around the current president, the billionaire Sebastián Piñera. The Pandora Papers revealed that he is using offshore companies to hide money he has been taking from mining companies. Piñera’s man, Sebastián Sichel, ended up in fourth place at just 12 percent. He was slightly behind a surprise candidate, the economist Franco Parisi, who does not even live in Chile. (Parisi claims to be neither left nor right, but as is always the case, that means he is quite right-wing.) The traditional Center-Left, which ruled the country from 1990 to 2010 as the Concertación coalition, also collapsed. Their Christian Democratic candidate, Yasna Provoste, won just under 12 percent of the vote, landing in fifth place.

This is not just about the ups and downs of bourgeois politics. Chile has been experiencing an organic crisis, in which broad sectors of the masses no longer trust the institutions that present themselves as “democracy.” Only 47 percent of eligible voters went to the polls on Sunday — in the last decade, there has been only one election in which even half the people took part. The Congress, also elected on Sunday, is one of the country’s most hated institutions. The Senate just voted to reject the impeachment of Piñera for corruption — and simultaneously voted for an austerity budget.

The rebellion of 2019 won one of its central demands: the adoption of a new constitution to replace the one dictated by Pinochet in 1980. A Constitutional Convention was elected in May to work out a new regime. Yet despite some democratic reforms, all the main pillars of the neoliberal regime remain in place. Because health care, education, and pensions have been privatized, millions of workers, retired people, and youth live in extremely precarious conditions. Chile’s repressive forces, like the military police, who still enjoy the same impunity they had when Pinochet was in power, remain in power — as does the oligarchy of billionaires who control the country’s riches.

Millions of people on the streets called for self-determination for the Mapuche people. Their flag, the Wenufoye, flew high above Plaza Dignidad in central Santiago. Yet during the election campaign, Indigenous lands were again occupied by the military. Piñera’s government is trying to break Mapuche resistance so that multinational corporations can better exploit tinder and mineral resources.

Kast represents the reaction to the protests of the last two years — his campaign has been bolstered by a media campaign for “law and order,” with fantastical stories about crime caused by activists, poor people, and immigrants. Kast’s supporters are hoping to restore Chile’s white supremacist and repressive state — inspired by Trump’s movement, they call to “Make Chile Great Again.”

Boric, on the other hand, represents the attempt to channel the rebellion into the institutions of the bourgeois state. He was a leader in the student movement of 2011 and founded a new left group that became part of the Frente Amplio. In the election campaign, he tried to appeal to moderate voters, promising that only his ticket would assure “governability” and social peace. He was long the favorite, but his lead melted away in the last month of the campaign. Adapting to the “law and order” campaign by corporate media, Boric on election night promised to fight drug traffickers — which will only give Chile’s police an excuse to harass and murder poor people.

The Frente Amplio, in an alliance with the misnamed Communist Party, worked to contain the October Rebellion. Especially on November 12, 2019, a historic general strike shook the country. The Piñera government was on the ropes, and a revolutionary situation could have developed. This is when the reformist Left signed a Peace Agreement with Piñera, telling people to abandon the streets and wait for elections. Thanks to the Frente Amplio, all the contradictions that led to the revolt remain unresolved. Demands for dignified health care, education, and pensions have not been fulfilled, and the Constitutional Convention still gives the Right the power to block even modest social reforms.

Thus the reformist Left allowed the Far Right to become emboldened. As Chile approaches the runoff in one month, many will see Boric as a lesser evil to prevent the victory of a Chilean Trump. As Boric becomes ever-more moderate, it is clear that a vote for him will not stop Kast and the xenophobic forces he represents. Only the continued self-organization and mobilization of the masses — taking up the “banners of October” again — can stop the right.

The Revolutionary Workers Party (PTR), the Chilean sister organization of Left Voice, stood candidates in 10 of Chile’s 28 electoral districts. This Trotskyist organization created a Front for Working-Class Unity (FUCT) along with other socialist groups. Their candidates were workers, environmental activists, and figures from struggles for abortion rights, LGBTQ+ rights, and democratic rights. Their campaign was not focused on winning seats — it was about agitating for a general strike to bring down the regime. Seats in parliament would support that goal.

The PTR and the FUCT got a total just over 50,000 votes — the best results for Trotskyist candidates in Chile since the 1930s. Along with the historic result for Trotskyists in Argentina a week ago, these votes represent hope for the future. In coming social explosions in Chile, revolutionary ideas will be more visible to broad swaths of the working class.

In Antofagasta, in the north of the country, the PTR had a particularly strong result. The factory worker Lester Calderón carried out a campaign to “take the voice of the working people into congress.” In this mining center, where a good part of the world’s copper is mined, Calderón was a local sensation. This success was not an electoral phenomenon: Calderón was a spokesperson of the Emergency and Protection Committee, an organ of self-organization during the revolt. Calderón was not able to maintain the strong showing from six months ago, but a Trotskyist got 5 percent of votes in one of the world’s most important mining centers.