U.S. Military in Africa Fuels Political Violence Across the Continent

AFRICOM is a tool of U.S. imperialism that goes largely under the radar. Its consequences are devastating for the people of Africa. 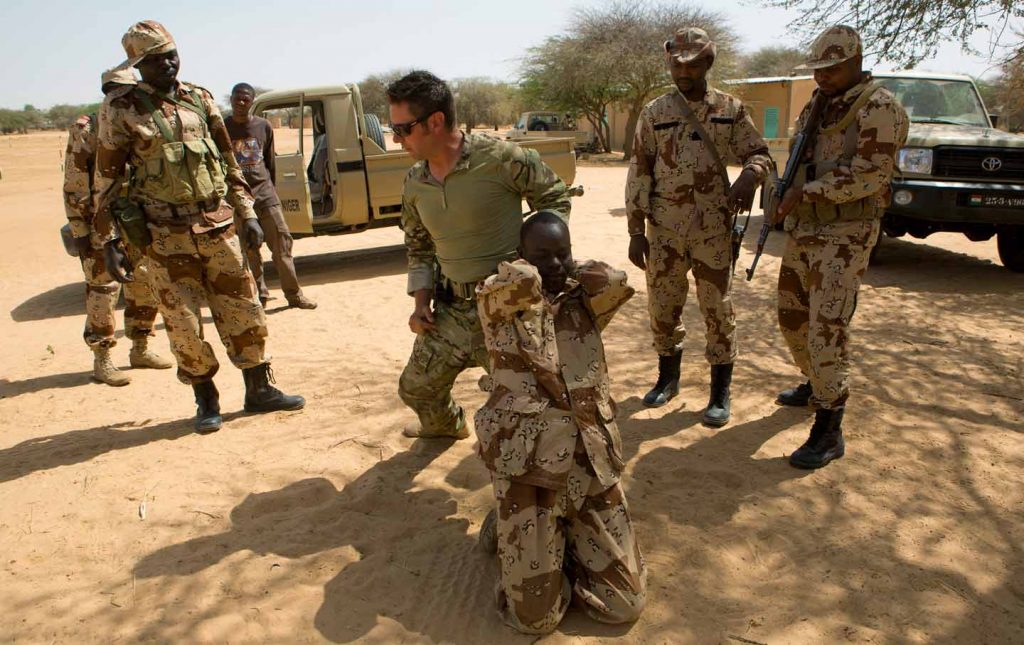 African countries, particularly West African countries, have undergone a series of military coups in the last several months. Even without directly intervening in these countries’ affairs, the fingerprints of the United States are all over these takeovers that disrupt, threaten, and end the lives of African people. Turmoil on the African continent cannot be understood without looking at the role of AFRICOM.

The United States has 11 combatant commands. These are subdivisions of the Department of Defense (DoD) that group two or more branches of the U.S. military together to place strategic focus on a specific area of U.S. imperialist interest. AFRICOM, established in 2007, is the newest of these combatant commands; it oversees U.S. military operations in Africa.

AFRICOM’s own website claims that its mission is to “promote regional security, stability, and prosperity,” but in reality it functions much more like the School of the Americas, a DoD training program for Latin American military leaders — famously referred to as the “School of the Dictators” in a 1996 New York Times editorial. The program is best known for its role throughout the Cold War, when it contributed to the rise of various strongmen who did the violently anti-communist and anti-worker bidding of U.S. business and political interests throughout South and Central America. The program was aimed at ensuring stability and prosperity for U.S. capital. School of the Americas trainees routinely massacred and disappeared working-class and progressive people in Latin America and stripped away hard-won democratic rights. Their efforts to abet the Global North in pillaging these countries’ resources left them severely underdeveloped.

Some of these atrocities stained the standing of the United States so profoundly on the international stage that the School of the Americas had to be rebranded as today’s Western Hemisphere Institute for Security Cooperation. Despite the name change, though, it still functions as a fundamental tool of U.S. imperialism.

Much like South and Central America, imperialist nations have long viewed the African continent as a place for stealing valuable assets. The continent has 30 percent of the world’s remaining mineral wealth and is home to five of the top 30 oil producing countries in the world. That is why the European powers carved up the continent during the “Scramble for Africa,” and it is why the United States now seeks to control the military operations of African countries in key regions like the Sahel (along with French imperialism) and The Horn, as well as maintain a broader military presence throughout the continent.

The best-known example of AFRICOM’s impact is the regime change mission in Libya in 2011. This operation was enacted by a multi-state “coalition,” led by the United States, to impose United Nations Security Council Resolution 1973 — which established the basis for a foreign military intervention in Libya’s civil war. It is an example of just how much damage U.S.-led intervention can do to a country without the United States ever having to put boots on the ground or act unilaterally — both recurring aspects of AFRICOM’s operations.

Hillary Clinton, then U.S. Secretary of State, bragged at the time about how the U.S. intervention in Libya’s civil war resulted in the death of Muammar Qaddafi, joking to a reporter, “We came, we saw, he died.” While Qaddafi subjected the people of Libya to political suppression and violence, the U.S. intervention was one of the most devastating moments in Libya’s history. It further fueled the country’s civil war, opened the floodgates for greater corruption, and led to the creation of slave markets.

AFRICOM has been around for little more than a decade, but the tactics used in Libya were tested decades earlier when U.S. proxy warfare was used to suppress the Pan-Africanist movement that once provided inspiration to colonized Black people throughout the continent and in Black communities of the United States. This was the case in the Democratic Republic of the Congo, where the United States used its international connections to strengthen opposition to Prime Minister Patrice Lumumba, a leading Pan-Africanist figure. The CIA. even had a plan to assassinate Lumumba with poison toothpaste, though the organization was unsuccessful at recruiting an asset to do the deed.

The United States was successful at sabotaging many of the African independence movements that erupted during the Cold War. However, once the Soviet Union collapsed, the United States could no longer use the supposed threat of communism to justify its domination of the African continent and other parts of the world. The “War on Terror” became the new excuse.

Investigative journalist Nick Turse has been leading efforts to uncover the extent of AFRICOM’s operations, many of which remain withheld from the public and the press. In 2019, he reported that from 2008 to 2019, the number of U.S. troops, bases, and drone strikes across the continent all spiked considerably — most with counter-terrorism as the stated mission. Rather than curbing terrorism, the growing U.S. military presence actually led to increases in activity by the very actors the United States claimed to be there to suppress.

While much of the bourgeois press claimed that President Biden ended the “War on Terror” with his withdrawal of U.S. troops from Afghanistan, AFRICOM has continued its activities in Africa, often in partnership with France’s imperialist presence that Africans strongly oppose.

Along with aiding the imperialist French military, the United States uses its forces in Africa to train the armies of various African countries. These training initiatives most directly reveal the U.S. roots of the wave of coups in Africa. Since 2008, at least nine West African military figures trained by AFRICOM have led coups in their countries. The Burkina Faso coup, the most recent military coup in Africa as of this writing, was led by Lt. Col. Paul-Henri Sandaogo Damiba, who participated in at least half a dozen AFRICOM training exercises.

AFRICOM’s operations are covert and enable the United States to influence Africa through proxy control of various countries’ militaries rather than explicit U.S. military occupation. However, some African countries are subjected to the more overt tactic of U.S. airstrikes. In Somalia, for example, the United States conducted 42 airstrikes from 2007 to 2017, and then under the Trump administration rapidly increased those strikes launching another 43 just between January and August 2020. Though it is well established that U.S. airstrikes create a high rate of civilian casualties, many of which often go undereported by the military, the Biden Administration has continued bombing Somalia.

As the recent wave of coups throughout West Africa shows, the training that AFRICOM provides to brutal national armies is not really about “counter-terrorism.” Thanks to the United States, these armies are skilled at putting down uprisings of African people fighting for independence from neocolonialist imperialism and control of their own resources for their own development.

It is long past time that Africans were able to determine their futures free of the violence and undevelopment to which they are subjected by the imperialist powers. It will be up to us in the United States — the heart of imperialism — to end what the U.S. military has been doing throughout Africa. That will require that we understand it and mobilize against it.