We Are the Only Ones Who Will Liberate Us

With every victory won as a result of Black struggle, the ruling class has left no stone unturned to curtail social progress. Empty promises of incremental change or a seat at the oppressor’s table will not liberate us. To be truly free, we must overthrow the racist-capitalist system that profits off our lives. 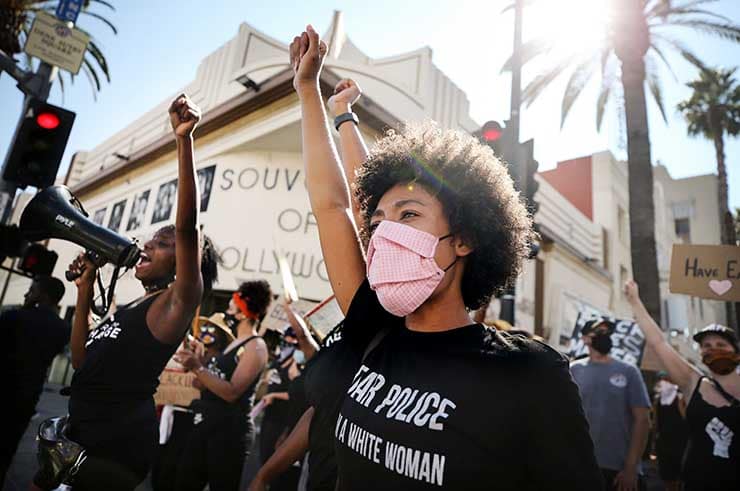 There was a great disparity between the treatment of George Floyd uprising protesters and that of the white supremacist insurrectionists on January 6, 2020. Indeed, this one of the most striking modern-day displays of the American legal system’s racism. While the state used rubber bullets and tear gas against the protesters during the George Floyd uprising, white supremacist insurrectionists were allowed to walk unscathed in and out of the Capitol and even take souvenirs home.

With the George Floyd uprising and the Covid-19 pandemic, we saw an intensification of state repression as more people were exposed to police violence. During the uprising, over 17,000 people were arrested in 50 major U.S. cities, and about 300 people were charged with federal crimes. As the pandemic raged on, there were over 100 rebellions inside the prison industrial system over poor medical care and unsanitary conditions.

More recent examples of the legal system’s racism can be found in the trial of murderer and white supremacist teen icon Kyle Rittenhouse. Even before the trial, Judge Bruce Schroeder ordered that the three victims whom Rittenhouse shot (killing two of them) could not be referred to as the “victims” that they clearly were, but could be referred to as “looters,” “rioters,” and “arsonists” if shown that they had engaged in these actions. During the trial, the judge went on to subject everyone in the courtroom to his “God Bless America” ringtone, instructed everyone to applaud for a veteran (who happened to be a defense witness) on Veterans Day, and even made a racist joke about Asian food. The judge also dismissed a count of possession of a dangerous weapon by a person under the age of 18.

As we watched Judge Schroeder treat Rittenhouse with kid gloves, the trial for Ahmaud Arbery’s brutal murder is being allowed to proceed with just one Black juror, even though the judge in that case observed that there was intentional discrimination in the jury-selection process.

The white supremacist double standards of the American legal system are not simply a manifestation of individual cops’ or jurists’ racism, although that certainly is a problem. White supremacy is an inherent characteristic of American society, which was built on ownership and exploitation of Black people for free labor. Racism continues to serve as a powerful profit-making tool for the ruling class, which uses it to divide workers along racial lines, pay Black workers less, and ultimately drive down wages for all workers.

The ruling class portrays Black people as greater threats to society than white people. This has resulted in their overrepresentation in the prison system. The U.S. prison industrial complex today is a multibillion-dollar industry and has the highest number of incarcerated people in the world, with the people behind bars being disproportionately Black. This industry has thrived under both Republican and Democratic leadership. Prison labor is used for everything from making masks and hand sanitizers to fighting fires. Private companies eager to hire prison workers will often not rehire the same workers once they are released from prison, because hiring free human beings would require paying them nonprison wages. Cops and the legal system simply uphold this racist-capitalist system. No wonder white supremacists have an affinity for becoming cops.

Throughout history, Black people have fought and resisted oppression, often joined by white workers, students, socialists. These fights have won important victories. But the ruling class has met these victories with new methods to curtail the most progressive measures and maintain systemic racism.

Although the 13th Amendment officially abolished slavery in 1865, the ruling class simply developed innovative ways to extract forced labor for profit and maintain hegemony over Black lives. The first of these innovations was an exception in the 13th Amendment that allowed for extraction of free labor. The amendment states, “Neither slavery nor involuntary servitude, except as a punishment for crime whereof the party shall have been duly convicted, shall exist within the United States, or any place subject to their jurisdiction.” This loophole allowed states to pass laws known as Black Codes, which made it easier to imprison Black people. The Black Codes allowed the surveillance and incarceration of Black people by outlawing loitering and vagrancy. According to historian Khalil Muhammad, “The black codes, for all intents and purposes, criminalized every form of African American freedom and mobility, political power, [and] economic power,” except for one thing: “the right to work for a white man on a white man’s terms.”

As Black people were granted citizenship and the right to vote, Jim Crow laws further criminalized being Black through segregation and disenfranchised Black people through poll taxes and literacy tests. Breaking these laws or any racist “social norms” resulted in beatings and lynchings of Black people.

Even though the Civil Rights Act of 1964 ended Jim Crow laws, gerrymandering, voter-suppression laws, criminal background checks, and violent racist policing have continued to maintain the racial order on which American society was built.

When the Voting Rights Act of 1965 was passed, it was celebrated as a major civil rights victory. It required that states with a history of discrimination in their voting laws get approval from the federal government before making any changes to their voting laws. In 2013, however, the U.S. Supreme Court struck down that provision in Shelby County v. Holder. After this decision, various states undertook racist measures, such as voter ID laws, the closure of polling places, and proof-of-citizenship requirements, which were clearly designed to disenfranchise Black voters.

In addition to cracking down on class struggle by force, the ruling class continues to try to pacify class consciousness through co-opting social justice and labor movements. They do this through pragmatic solutions, philanthropy, and the promise of incremental reforms, all of which serve to maintain their rule. They present us with horrible “options” that ultimately serve their capitalist interests regardless of which option we pick. They urge us to “vote for the lesser evil” or appeal to the moral sensibilities of our billionaire bosses as pragmatic solutions to our oppression. Pragmatism, however, serves only to keep the working class oppressed, busy, and distracted in pursuit of survival in a capitalist society, with a promise of an eventual end to our exploitation — akin to an empty promise of an afterlife. Representation politics is another ruling-class tactic. Using this tactic, the ruling class recruits leaders from marginalized backgrounds to keep the masses in check, all the while peddling this move as a sign of progress.

We recently saw these tactics play out in the Minneapolis city elections. After City Council members backed out of their pledge to defund the police, the abolition-friendly philanthropic group Yes 4 Minneapolis swooped in and sapped the energy of the defund-the-police movement by funneling it into a nebulous plan to replace the police department with a department of public safety. The plan was a far cry from abolishing or even defunding the police. It would have removed the mayor’s complete authority over policing and made it a shared role with the City Council. The proposal would have also removed the current requirement to keep a minimum number of police based on the population.

Although the plan to replace the police department made it to the ballot, it was ultimately defeated. The ambiguity of this plan played into the fear mongering of its pro-police opponents as well as concerns of skeptical voters for not being specific enough in the face of a constant news cycle about rising crime. The plan could not win support in Minneapolis’s affluent neighborhoods or in Black-majority neighborhoods.

The mayoral candidates backing the plan to replace the police department also lost, resulting in the embattled mayor and capitalist lap dog, Jacob Frey, winning a second term. But 43 percent of the people voted to replace the Minneapolis Police Department, which reflects the overall unpopularity of the police department. It is a window into what is possible if this energy is used to build working-class independence against police brutality and ruling-class hegemony.

The ruling class has shown that it has no plan for, or interest in, stopping its violence. We cannot continue to allow “progressive” politicians to mislead us through their empty promises about incremental change. Nor should we put our faith in abolition-friendly nonprofits, which are often liberal fronts for the capitalist Democratic Party.

We cannot expect this racist system to deliver our liberation when its survival depends on our subjugation. As Audre Lorde said, “The master’s tools will never dismantle the master’s house. They may allow us to temporarily beat him at his own game, but they will never enable us to bring genuine change.” For us to succeed, the working class and the oppressed must overthrow the racist-capitalist system that oppresses us. We need political self-organization. We need a revolutionary workers’ party of the working class, immigrants, and the unemployed, to fight and defend against police oppression and build the power of the class for revolutionary socialist action.