Over 20 Amazon workers and a crowd of journalists and leftists met on Friday afternoon in Staten Island, New York for a press conference led by the Amazon Labor Union. Workers know that united, they can defeat Amazon. 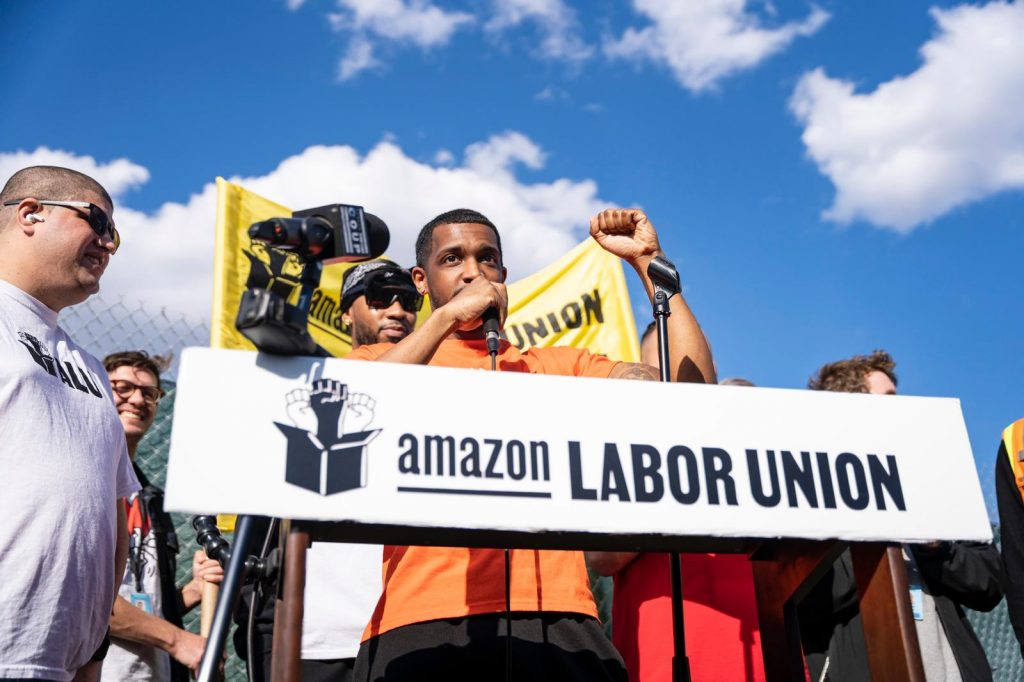 On Friday, the Amazon Labor Union (ALU) held a press conference on Staten Island, New York, led by Union president Chris Smalls. Over 20 workers addressed a crowd of journalists and leftists on the grass next to Amazon warehouse LDJ5, which will begin their unionization vote on April 25. On the other side of the street was JFK8, which made history by voting in favor of unionizing last week, the first Amazon warehouse to do so in the United States.

The warehouses are enormous, windowless buildings surrounded by massive parking lots. I can imagine how walking across the warehouse day in and day out breaks your body. Mos, who has worked at Amazon for four months, tells me in an interview, “You gotta look at it. We climb up a ladder to pick up merchandise that could be anywhere form 2 ounces to 50 pounds, to climb down a ladder with that in your hand. There is no safety in that. There is no belt holding you to that ladder. It’s dangerous.”

In the press conference, some workers compare this system to modern day slavery. Others explain that they are treated like machines — but at Amazon, machines are treated better than people.

As the press conference began, Chris Smalls called every Amazon worker to the front. “This is about all of us,” he explained. Almost two dozen workers, mostly wearing ALU shirts, stood proudly at the front, some holding a banner that said “Amazon Labor Union, We Won!”

The press conference lasted nearly two hours, with over a dozen workers taking the microphone and speaking about their experiences and analysis. The comradery, the joy, and mutual appreciation amongst the workers was palpable. As they said over and over, they couldn’t have done it without each other.

Michelle, a Latina worker wearing an ALU t-shirt that said “Hot Girls Vote Yes,” came up to the mic and read: “A letter to my co-workers: I want to say thank you to my co-workers who believe we deserve better and for believing in us. We made Amazon the billion-dollar company it is today.”

The workers are deeply aware of the massive profits they make for Amazon. As African immigrant and Amazon worker Brima Sylla said, “Without the workers there would be no Amazon. With all the profits, we don’t see any increase. And this is bad. We need to put the people first, because who makes the profit? People!” He speaks seven languages and was involved in outreach to African workers.

It was also clear to workers how much Amazon invested in making sure they didn’t unionize — all told, the company spent at least $4.3 million this year on union-busting. One of the workers explained, “These guys [Amazon] spent millions to tell us to vote no. They shut down this whole building over every one of us at least seven times… Every time the floor shuts down [in the section I work at], we get cursed out because it’s $200,000 every time the floor gets shut down for 10 minutes. They shut it down for the entire building, everyone, and sent us to basically a bunch of lies. Emails, text messages and everything.”

Some workers spoke about the fact that the ALU is an independent union, unaffiliated with the top-down business unions that have failed to unionize Amazon so far.

Who said you need to follow union rules and regulations to get a union? Throw that shit out and burn it. This is a new day. With new times comes new things. Just like they first started unions back then. The reason we have all these problems when it kinda simmered down, the corporations took advantage of all the rules and regulations and reformed and used them to fit them.

It was the unity of the workers and the rank and file organizing that brought about this victory. And it’s that unity that workers will use to fight for a new contract.

Angie, one of the union organizers said, “I want to thank all the workers who voted yes. And even those who are misinformed, we are here to inform you. This is not a war between us. Let’s unify and bargain for the contract of our dreams. If we fight together, we can defeat the beast.”

Workers are demanding a $30 wage, as well as an end to mandatory overtime, among other demands.

The workers are getting ready for the unionization vote at the warehouse across the street. Maddie, a worker at LDJ5 explained the environment of repression: Amazon is throwing everything it can at the workers to try to make sure they vote no, using racist and sexist remarks to get people to vote no on the union.

But the workers aren’t scared. Derrick Palmer said, “LDJ5, we are coming. We got 2 weeks until this election and we are gonna whoop Amazon’s ass.”

The ALU is part of a broader unionization wave in the post-pandemic working class. The Washington Post dubbed young people “Gen-U” for union; 200 Starbucks stores have applied for a union, as have Condé Nast workers, Fordham student workers, and others. A new unionization effort seems to spring up every day. Since the historic victory, workers at over 100 Amazon warehouses have already reached out to the ALU, as have workers from Walmart and other stores.

One worker explained, “How did we do it? We didn’t go out and get expert, expert, expert. We found crazy motherfuckers just like us who aint scared of nothin. Who ain’t scared of the cats in there. There is a lot of people out here who are tired of being bullied. So sometimes you get sick and tired of being bullied and you go out and beat the bully up.”

After being abused by their bosses, who make massive profits off hyper-exploitation, the workers are ready to fight back.