Today, Amazon workers at the JFK warehouse on Staten Island, New York voted to unionize. In doing so, the warehouse has formed the first U.S. union in the company’s history. 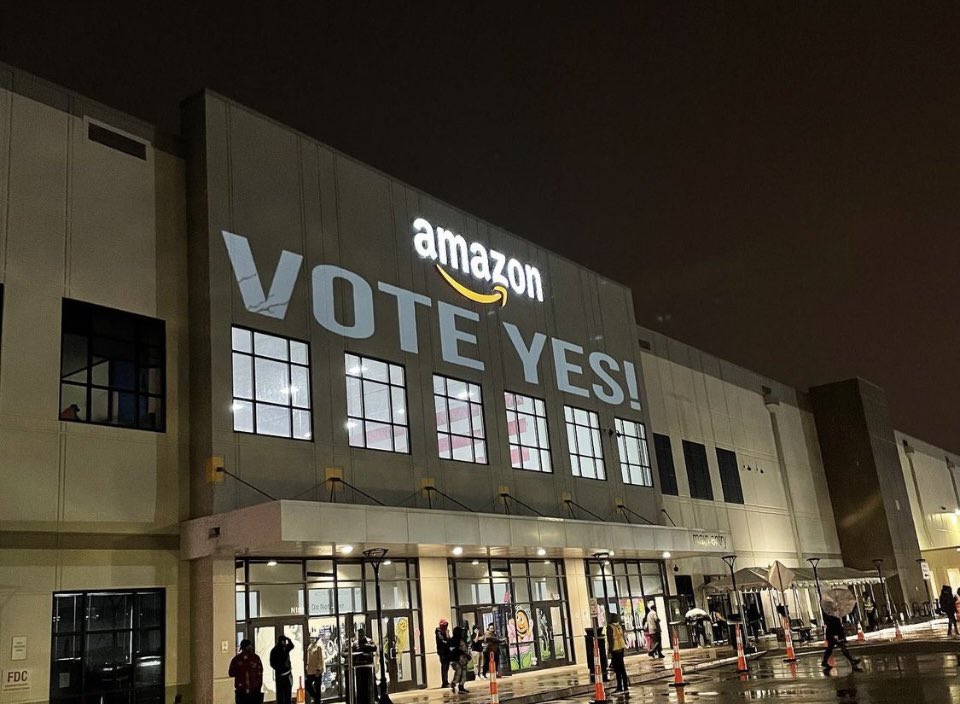 Today, Amazon workers at the JFK8 warehouse on Staten Island in New York voted to unionize. In doing so, the warehouse has formed the first U.S. union in the company’s history. The Amazon workers formed an independent union known as the Amazon Labor Union (ALU).

It’s hard to overstate the significance of this win. Amazon is the second biggest employer in the United States, known for both its brutal work conditions and highly effective union-busting campaigns. The company has spent over $4 million on union-busting consulting, all while it reaps immense profits from hyper exploiting its workforce. But today at the Staten Island warehouse, workers defeated Amazon.

The Staten Island unionization drive was not led by any of the big labor unions. Rather, it was led by former Amazon employees, including Chris Smalls, who was fired from Amazon in 2020 after organizing a walkout protesting the conditions at the warehouse.

Left Voice spoke to Smalls at an Amazon walkout two years ago:

The Amazon Labor Union is recognized by the National Labor Relations Board as an independent union. They were able to defeat the Amazon Goliath using funds collected primarily through GoFundMe.

A Staten Island Amazon worker, Tasha Jones, said that in the days before the vote, managers met with workers to explicitly tell workers to vote no. “They didn’t tell us at the beginning to vote no,” she said. “But I will say, the last meeting was something else.” Yet, the majority of workers rejected Amazon’s anti-union propaganda and voted in favor of unionization.

In fact, last month a union organizer and two workers were arrested for “trespassing” at Amazon. Chris Smalls was charged with “trespassing, obstructing governmental administration, and resisting arrest.” Smalls went to the warehouse to deliver union materials and food. This was a clear intimidation tactic by an increasingly desperate Amazon.

Amazon workers are among the most hyper-exploited in the country, working long hours in backbreaking labor. In the words of Francis Wallace, a worker interviewed by Left Voice in Bessemer, Alabama last year, “It is extremely tiring, I will agree with that. Of course, there’s bending and standing up all the time. There’s a ladder inside my area, ’cause I do stowing. I’m climbing up and down the ladder, bending up and down, picking up the boxes. When you do that for 10 hours straight and you only have three, maybe 15 minute breaks, it gets really tiring.” Another worker reported extremely hot warehouses, without ventilation.

Multiple workers have died on the job at Amazon warehouses over the past year. Six died during a tornado that struck the midwest in December, and two died at the Bessemer location. One worker suffered a stroke after being told by management that he couldn’t leave work. Hours later, another worker died. “There is no shutdown. There is no moment of silence. There is no time to sit and have a prayer,” Perry Connelly explained. “A couple of people that worked directly with him were badly shaken up and wanted to go home and were not allowed to go home.

This sudden union victory challenges the conventions of traditional unionizing campaigns, which rely on big unions tied to the Democratic Party, years of one-on-one meetings, and working at a snail’s pace. The ALU filed with the NLRB with only 30 percent of the facility signing cards supporting the union, far lower than the roughly 80 percent typically advocated by the unionizing playbook.

The Staten Island workers’ victory is part of a wave of unionization sweeping the country. Nine Starbucks have unionized in the past few months with well over 100 locations filing for union elections. It’s part of a new generation of workers who know that they need a union. The Washington Post explains that, ​”Many leaders of the movement are in their early 20s; they’re leaning into the nickname “Generation U,” for union. Approval of unions is the highest it has been since 1965, with a 68 percent approval rating — which rises to 77 percent among Americans ages 18 to 34 — according to a recent Gallup poll.”

We may be witnessing a generation of workers who refuse to abide by the rules neoliberalism imposed on the labor movement for decades. This is a precarious generation that is highly indebted and has little to lose. It’s a generation that’s highly politicized, challenges the status quo, and hopes that unions can be a democratic tool to defend their interests against the bosses.

Staten Island is not the only Amazon warehouse counting votes this week. In Bessemer, Alabama, the NLRB threw out the last unionization vote due to the extensive illegal union busting techniques used by Amazon, including putting a mailbox on Amazon property when they were explicitly instructed not to do so. While the vote against the union last year was a landslide victory for Amazon, the votes this time are too close to call, with the current tally standing at 993-to-875 against the union, and 416 ballots being challenged to be reviewed at a hearing.

Today’s unionization victory also comes in the context of other Amazon mobilizations: just a few weeks ago, three Amazon warehouses walked off the job. More than 60 employees at two delivery stations in Queens, New York, and one outside of Washington, D.C. walked out to demand a $3 hourly raise. This is the first multistate walkout at U.S. Amazon warehouses.

This victory must be seen in the context of a shift in working class consciousness as a result of the pandemic: workers are essential, they know it, and they deserve to be treated as such. Also part of this context is widespread hatred of Jeff Bezos and the billionaires who profit from the hyper-exploitation of workers, and whose fortunes ballooned during the pandemic. Against this backdrop, we have also seen the Great Resignation, where individuals resigned in frustration with working conditions. Another was Striketober, in which we saw strikes at John Deere, Kellogg, Columbia University, and a number of smaller strikes. Sacramento teachers are also on strike, coming on the heels of the Minneapolis teachers’ strike which ended last week.

Importantly, Staten Island workers’ victory will surely inspire other Amazon workers both nationally and internationally. As the Starbucks unionization wave highlights, one union can inspire hundreds of others. There is tremendous potential for the working class at this moment.