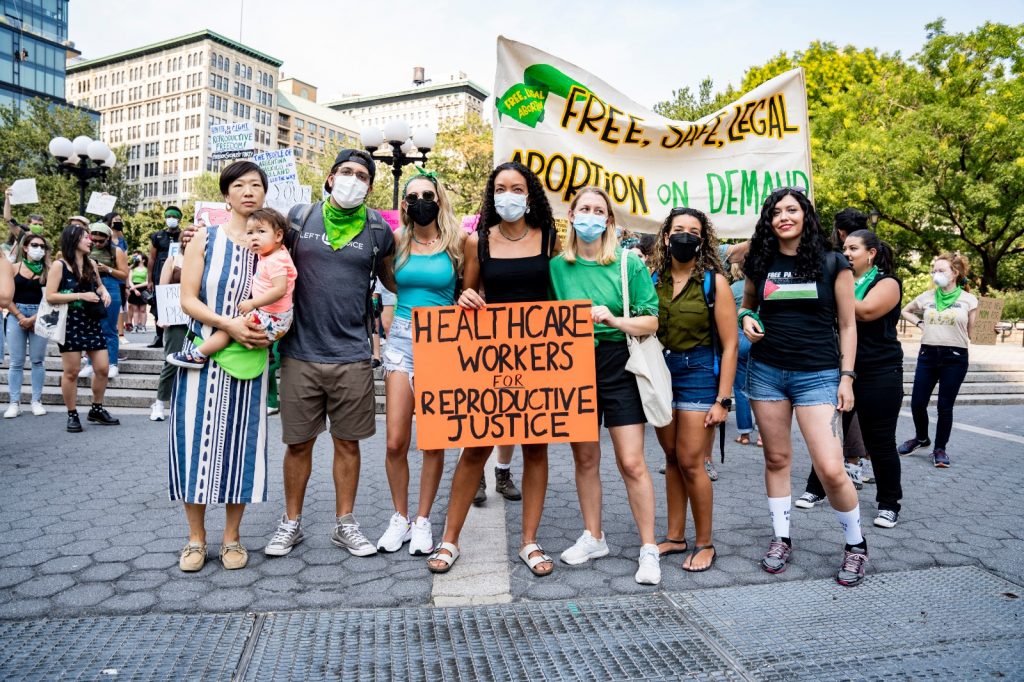 The recent leak of a draft Supreme Court decision confirmed what many have expected for some time: the Supreme Court plans to overturn Roe v. Wade. The Democrats, meanwhile, have proven time and time again they will not protect the right to abortion. As a healthcare worker who previously worked in a primary care clinic providing abortion care, I know that abortion care is life-saving health care, and it should be available to all as a human right.

The only way to protect this right is by mobilizing in the streets and in our workplaces. Healthcare worker unions throughout the country must mobilize their members to fight back against this decision.

As we have written,

This monumental decision will make abortion illegal or all but illegal in dozens of states across the country as soon as it is announced, making access to an abortion almost impossible for tens of millions of people overnight. This decision is an attack on all people who can get pregnant; in many states they will be forced into illegal and unsafe abortions, expensive trips out of state, or be forced to give birth. Working people, working people of color, and poor people in particular, who often do not have the means to travel several hundred miles to reach a clinic willing to perform an abortion will be most affected.

“Abortion is healthcare and healthcare is a human right!” This refrain, chanted in the streets just last week, cannot be more accurate. As healthcare workers who strive to protect the heath of our patients, a threat to abortion rights is a threat to patient health, especially to the health of the poor and oppressed.

However, while some unions, like Starbucks Workers United, have put out statements condemning the leaked decision, healthcare worker unions — many of whom literally provide abortions — have been silent. Unions like National Nurses United (NNU) — the largest nurses union in the nation — or the Service Employees International Union (SEIU) — the largest union of healthcare workers — have been silent on this issue. The union I was previously part of, the Committee of Interns and Residents (CIR), which represents thousands of resident physicians around the country, has also been largely silent. There has not been so much as a statement condemning the recently leaked decision — just a single retweet from the SEIU account — and certainly not even close to any call for members of these unions to act.

It is absolutely inexcusable that the largest healthcare unions in the U.S. have been completely absent. High school students are walking out of classrooms and actions are being called by various organizations because they all understand the threat that overturning Roe v. Wade poses. So why have the major institutions of labor in healthcare not come to the same conclusion?

While unions in the U.S. have historically focused on issues restricted to their workplaces, such as increased wages, shorter work hours, or improved working conditions, labor organizations have helped to win the right to abortion internationally. Polish workers went on strike in 2016 pressuring the government to vote down an abortion ban. Unions in Ireland launched a coalition in 2016 to help win the right to abortion and same-sex marriage in 2019. Rank-and-file union members organized actions as part of the “green wave” in Argentina to help win the right to abortion in 2020. Workers organizations have been at the forefront internationally to win these rights. We should be seeing similar mobilizations in the U.S.

Because of its controversial nature, the bureaucrats in union leadership are unlikely to take up this fight without pressure from the rank and file, and even then, they will likely work to contain the militancy of their members. This makes it even more important for workers to take matters into their own hands, remember that we are the union, and stick up for our fellow workers, both in our own workplaces and across the country. “Workers of the world unite” is not simply a slogan: it’s a call to action and a strategic imperative.

Since the leaderships of the healthcare unions clearly won’t take these steps, rank-and-file healthcare workers should force their unions to mobilize. To be clear, unions using their power to fight for the right to abortion would not mean giving a donation here or there toward a “pro-choice” politician’s campaign or calling members to “vote next cycle.” It means using the vast resources these unions possess to actually mobilize and support members who take action.

Mobilizations obviously should not be limited to healthcare sectors. Healthcare worker unions should fight across labor sectors with, for example, teachers’ unions and other labor unions. As workers, we make the world run and our power lies in our workplaces and our power to shut shit down. This is how fighting labor institutions could take a role in tangibly interevening to protect the right to abortion — as part of a mass movement to protect abortion rights.

Winning the right to safe, legal abortion on demand will come from the streets and workplaces — not the offices of capitalist politicians. Healthcare labor institutions have so far been quiet, but they should take up this fight head on today.