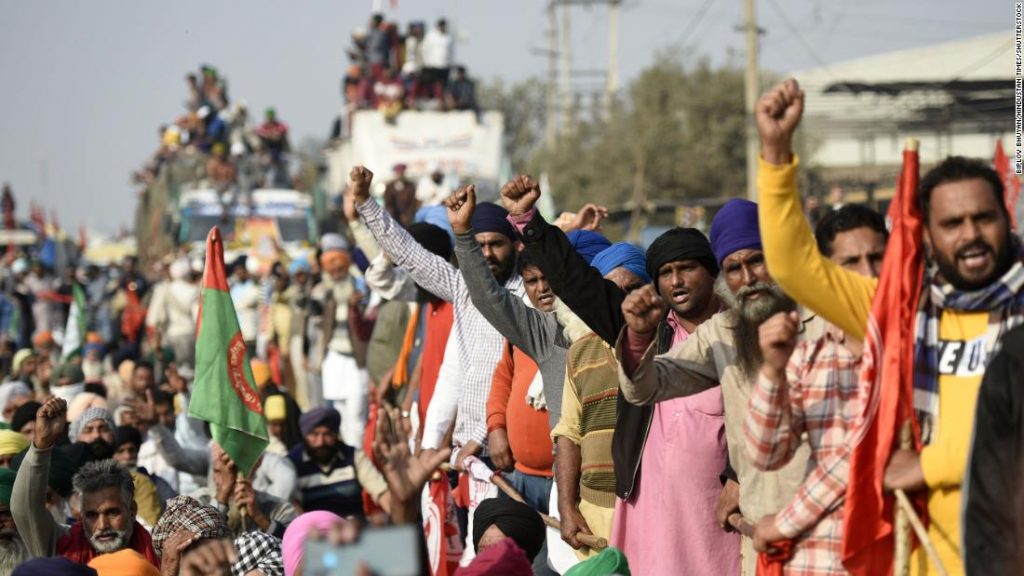 In a huge reversal, India’s Prime Minister Narendra Modi announced that his government will move to repeal the three pro-capitalist agricultural laws that have caused hundreds of thousands of farmers to protest over the last year. This marks a major defeat for the Modi government which, since taking office in 2014, has been on a privatization spree for the benefit of capitalists. This is also a huge victory for the farmers who’ve been protesting at the gates of New Delhi against the agricultural laws ever since they passed, in cold weather and through the pandemic, refusing to back down until the laws were fully repealed.

Passed in Parliament last September, the three laws, now known as the Black Laws, were squarely geared towards the corporatization of agriculture. These laws would have undermined the state-regulated marketplace by allowing farmers to sell directly to private buyers and enter legal contracts with companies before harvest. They would also have allowed the hoarding of food grain until farmers got better prices, which is illegal. Although the Modi government continues to paint these laws as reforms, in reality, these measures would only have left farmers, most of whom are small or landless peasants, at the mercy of large companies who have far more bargaining power.

Without these laws, farmers sell their producers to middlemen at government-regulated marketplaces (mandis) at guaranteed minimums, known as the Minimum Support Price (MSP). Those middlemen then sell the produce to state and private enterprises. Under this system, small peasants especially don’t have to worry about the costs of hoarding and storing their produce, which can run quite high.

The measures to privatize the agricultural system is a good example of Modi’s program: under the guise of “revitalizing” public sector enterprises, the Modi government has exploited weaknesses caused by decades of liberalization to push through aggressive privatization measures. Indeed, in a televised address this morning announcing the reveal, Modi continued to paint these laws as progressive and that they were geared towards helping farmers. Nothing could be further from the truth — far from helping farmers, these laws would have only given corporations more leverage.

Although the agricultural sector only accounts for 17 percent of India’s GDP, it employs almost half of the country’s 1.3 billion people, most of whom live on or rent small plots of land and are burdened with debt. In recent years, crop failures due to climate change have driven them into dire poverty and even more crippling debt leading many to resort to taking their own lives. For years, farmers have been calling for reforms, including higher MSPs and unconditional debt forgiveness.

Yet, in the face of these calls, the Modi regime unleashed more attacks — attacks which farmers fought back with their full strength. For almost a year, farmers have been protesting against these measures, with thousands camping out at the borders of New Delhi, the country’s capital. Last year, on November 26, to coincide with the arrival of hundreds of thousands of farmers at the city’s border, labor unions called for a nationwide general strike, one in which 250 million workers and farmers participated and fought against Modi’s labor and farm bills.

Over the past year, protesting farmers have not retreated from the streets. In January, more than 200,000 farmers in tractors descended on Delhi to disrupt Modi’s Republic Day military parade, many even moving to occupy the historic Red Fort. Farmers have also shut down railways, blocked highways, and occupied important industrial hubs. Through these protests, 700 farmers have died, either due to injuries sustained because of police violence and brutality, or suicide. The Modi regime has blood on its hands.

Earlier in the year, bowing to pressure, the Indian Supreme Court suspended the three laws. In negotiations with the Samyukt Kisan Morcha (SKM), an alliance of farmers unions, the Modi government promised an 18-month suspension. Yet, the farmers didn’t back down, promising to stay in the streets until the laws were unequivocally retracted.

The protests by farmers have been one of the biggest blows to the Modi regime, which has painted itself as steadfast in its plans and has refused to bow to mass movements. Indeed, few protests in the last seven years have garnered as much popular support as that of the farmers. While the Modi regime was able to strong-arm and pass their draconian and xenophobic citizenship laws or attacks on Kashmir, dividing public opinion through misinformation campaigns, and portraying protests and defense of democratic rights as anti-national, it has had less success in deploying similar tactics this time. In the face of these attacks, the protests only gained more support from across the country from workers and social movements, with many coming out in solidarity with those that they saw as feeding the country.

Following the announcement to repeal the laws, Modi implored farmers to return to their homes and end the protests. Many speculate that this repeal comes in anticipation of state elections early next year, especially as farmers constitute one of the biggest voting blocs. This year, farmers took this protest to state elections, actively campaigning against Modi’s Bharatiya Janata Party (BJP) in state assembly elections and dealing a heavy blow to their electoral prospects. As key states go to polls in just a few months — including Punjab and Uttar Pradesh, which have been at the center of the farmers protests — the campaign against the farm laws would have boded well for the BJP. The Party hopes to use this repeal to turn the tide, and paint themselves as friends of the farmers, a party with their ears to the ground, listening to and responding to their demands.

Yet, the farmers have shown no illusions in the Modi government so far. They see the repeal of the laws as solely their victory, and continue to have a deep mistrust in the regime. Even as Modi implores them to return to work, they have made it clear that they are not calling off the protest just yet. In a statement released soon after, the SKM says that while they welcome this decision, they are going to wait until the laws are officially withdrawn during the Parliament session starting in December. We are not leaving here until the repeal papers have been stamped,” a speaker said at a rally today. “Modi could be playing us but farmers are not fools.” Indeed, they also declared that the repeal of the farm laws were only the beginning — they plan to continue the protests until the government assures the guarantee of prices for agricultural produce for all farmers.

The farmers’ protests have been a huge example not just in India, but across the world, garnering support from all corners of the globe. To continue the fight against the attacks on workers’ and farmers’ rights, as well as against the decades of neoliberal policies that have worsened the conditions for the Indian masses, it is essential to take up the path opened by the general strikes of the past year and strike at the very heart of capitalist production until they win.