The following are a series of articles published in Left Voice addressing queer liberation and the fight for socialism. 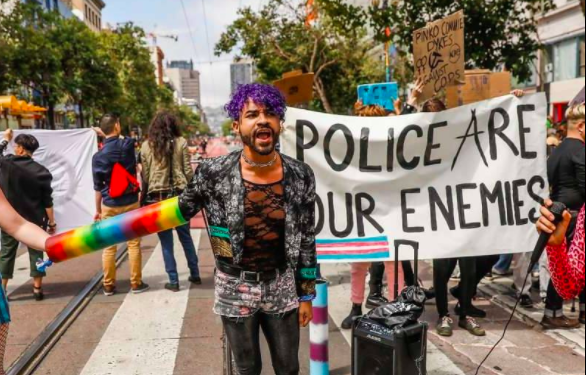 “No other group has gone from such marginalization to capitalist assimilation so quickly. In just fifty years, the cops went from beating, raping, and arresting us to marching in our parade. Since its inception, the LGBTQ+ movement has been divided on the question of assimilation: Do we want to fit into the current system, or do we want to change the whole thing? Here, revolutionary socialists can make an important contribution, with a strategy to beat capitalism and to fight all forms of oppression.”

In the 1970s, Jean Nicolas, Trotskyist militant and activist of the French Homosexual Front of Revolutionary Action, published “The Homosexual Question,” a brilliant analysis of the history of the oppression of “homosexuals” and the struggle for liberation, as connected to the struggle for socialism and new human relations.

LGBTQ+ oppression is inscribed in capitalist production and reproduction. Only socialism can create the context for queer liberation and sexual liberation for all.

As companies broadcast hollow messages of support on Trans Remembrance Day, many working class LGBT+ people are unable to afford or access adequate healthcare due to high insurance rates and discriminatory medical practices. We need to fight for a truly universal healthcare system that prioritizes health and well-being over profit.

“So many of my LGBT brothers and sisters are so scared right now. I imagine many of you are scared too. But as a revolutionary, I have to fight the immobility of fear. Bolsonaro wants us to bow our heads and hide the pride in ourselves and each other that we fought so hard for. I think of Stonewall almost 50 years later, and I know that Marsha and Sylvia must have been scared too. But like them, I know the only way forward is to fight. Its time for more marches, more organized rage. It’s time for a new generation of Sylvias and Marshas: new leaders who will make history.”

Immigrants’ rights are an LGBTQ+ issue.

Stonewall was a Riot

Pride month is a celebration of the Stonewall Riot in 1969. Now uprisings are breaking out all over the country. Wealthy, white gay men today might be opposed to “violence,” but the history of the LGBTQ+ movement shows that riots of oppressed people are about liberation.

Today marks the 50th anniversary of Stonewall. The riot against police violence will be commemorated with radical demonstrations, but also with “parades” including police, corporate floats and speeches by capitalist politicians. What happened? Has queerness lost its revolutionary potential?