What You Need to Know About the NYC Nurses’ Struggle

Catch up on Left Voice articles about the recent NYC nurses’ struggles. 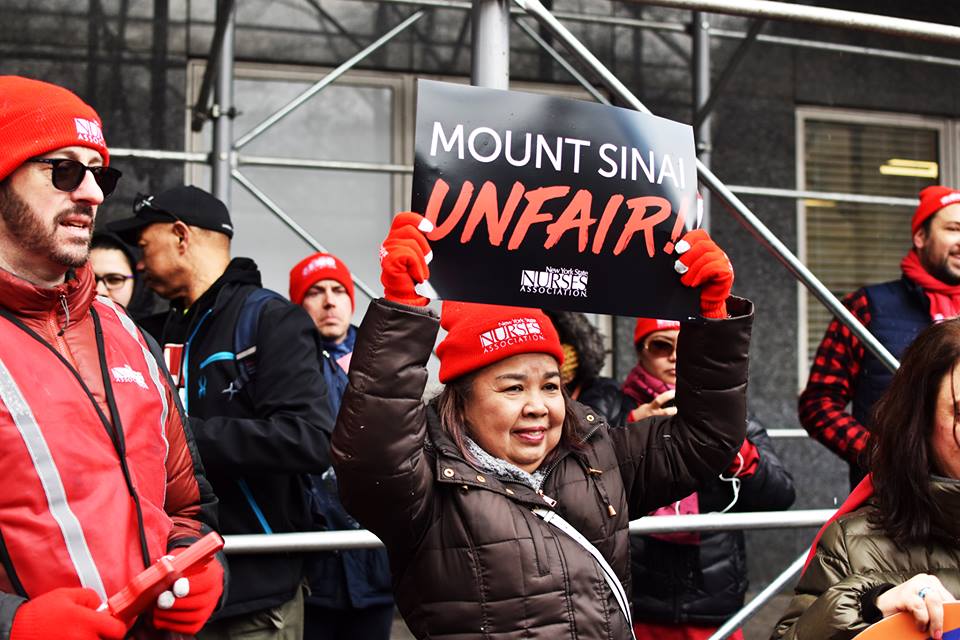 The recent nurses’ struggle within the “Big Four” (including the 3 largest private sector healthcare systems) in NYC can teach us a lot of lessons. Many aspects of their dynamic fight are worth examining closely, as we glimpse the expansive social role and potential power of majority women workers in the realm of social reproduction. Increasingly, we are witnessing workers’ will to fight to defend patients, students, public health and education. We can also see some rank-and-file challenge of the union bureaucracy and its “barren marriage” to the Democratic Party. These are a collection of articles that help to tell their story.

If you live in New York City, come to a talk about the nurses struggle on Wednesday, May 29 at the People’s Forum.

On the conditions in NYC hospitals:

Sexist Shaming Makes A ‘Good Nurse’: A nurse talks about vile encounters with managers and sexist norms on the job.

New York Nurses Resolve to Fight for Public Employees’ Right to Strike: Nurses voted overwhelmingly in favor of repealing Section 210 of the Taylor Law and fighting for public workers’ right to strike.

NYC Nurses Picket Mega-Hospitals for Safe Staffing: Nurses across the city gear up for a major strike authorization vote.

On the Picketline: Healthcare Workers United for Safe Staffing Ratios

At Mount Sinai Hospital in East Harlem, hundreds of nurses rally for safe staffing ratios in their contract. Over 10,000 nurses organized by the New York State Nurses Association (NYSNA) have been bargaining for a contract at Mount Sinai, St. Luke’s, Mount Sinai West, Montefiore, and NY-Presbyterian/Columbia.

Nurses Have the Power to Strike and Win: After voting overwhelmingly to authorize a strike, upwards of 10,000 NYSNA members are waiting to hear from union leadership whether the walk-out is actually going to happen at four hospitals run by the three largest hospital systems in New York City.

A Strike, Deferred: Did NYC Nurses Win Safe Staffing Ratios?: While the union’s headlines claim a historic win, a groundswell of rank-and-file nurses are staunchly opposed to the deal.

Nurses Are Leading Strike Efforts — Where Are The Physicians?: Nurses in New York City are pushing back against hospital systems that put profits over patients and threaten their efforts to strike for safer staffing ratios. While nurses are fighting, physicians, so far, have remained on the sidelines of this struggle.

Bronx Nurses Vote Down Contract, Continue to Fight for Safe Staffing Ratios: Despite NYSNA’s official endorsement and best efforts to ratify the tentative agreement, rank-and-file nurses at Montefiore Medical Center rejected the deal. Meanwhile, nurses at other facilities are demanding a re-vote.

Nurses Speak: “We Want a Union that Cares for Nurses and Patients”: Left Voice spoke with Diana Torres, a nurse who works full time in a rehab/medicine unit at Mount Sinai West. Torres is an elected member of the hospital’s Executive Committee and has consistently advocated for the union to win demands through militant collective action including strikes, as well as transparency and democracy.

10,000 nurses will decide whether to give bargaining committees the go-ahead to issue a 10-day strike notice when the time comes.