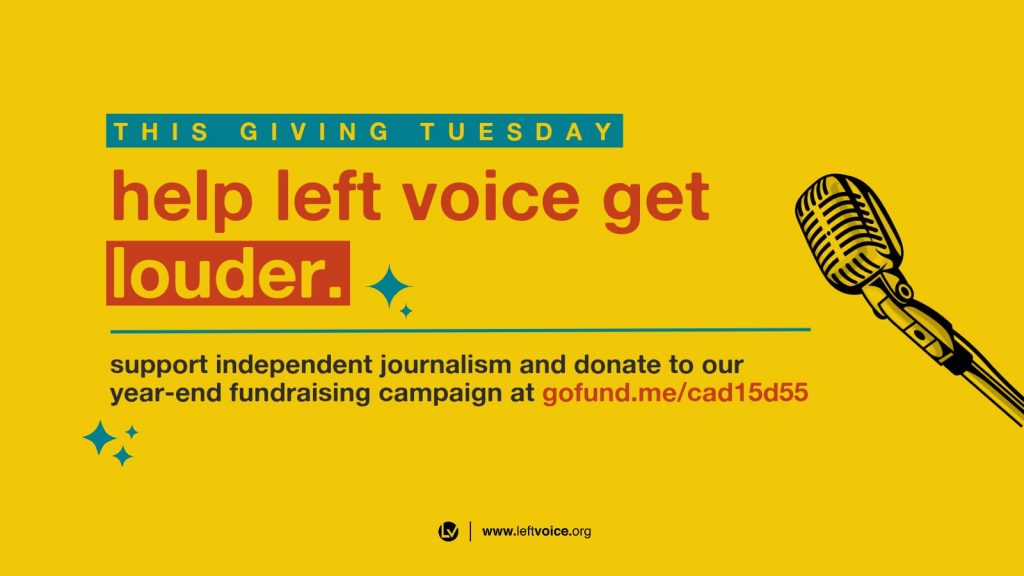 This year started out just as eventful as the last. A mere six days into the year, a mob of angry Trump supporters stormed the Capitol in rejection of the election results. In response, the Democratic Party managed to consolidate support for the incoming Biden administration in the name of protecting U.S. “democracy” and re-legitimizing its institutions. However, we’ve seen this support wane throughout the year with rising inflation, the prolonged effects of the pandemic, and inevitable broken promises on progressive legislation. In what is being dubbed the “Great Resignation,” tens of millions have quit their jobs this year, with nearly 9 million quitting their jobs in August and September alone, fed up with poor working conditions. We also saw the phenomenon of #Striketober, where unionized workers from industries like healthcare, mining, manufacturing, and more used their power against the bosses as their contracts ran out, demanding higher wages and better working conditions.

It is within this context that we at Left Voice have grown over the past year, not just as a publication, but also as a group of militants. We began the year at the picket line at Hunts Point Market in the Bronx, highlighting the voices of striking workers fighting for a $1 increase in wages. Our comrades who traveled to Alabama to cover the unionization effort at the Amazon facility in Bessemer were some of the first people to reflect the struggles of the striking miners in Alabama, making us a referent for mine workers and their community. As #Striketober continued, we went with the same gutso to the Kellogg’s pickets in Lancaster, PA and Battlecreek, MI, the healthcare workers strike in Buffalo, NY, and the oil workers’ picket at United Metro Energy in Brooklyn, NY.

And, while the Democratic Party and its agents worked overtime to keep class struggle in check, painting a false portrait of normality and peace, we were there at the frontlines calling out every instance of injustice that continued — or was even being championed — by the Biden administration. While even progressive Democrats rebranded the border camps to “influx facilities,” we continued to fight for open borders. From Palestine, to Afghanistan, to Haiti, we unequivocally called for the end of U.S. imperialism.

As the pandemic raged on, we put forward a statement to end vaccine imperialism and remove all patents. We were clear that the state that oppresses the working class across the world does so to those at home too. Despite widespread depoliticization during the first year of the Biden administration, we took to the streets after the attacks on abortion rights in Texas with the clear perspective that neither the Democrats nor the courts will save us. While the Biden administration continued to target Black Lives Matter activists, we dug our heels in to show how racism is etched in the heart of the capitalist state, including having a panel with anti-racist activists.

We complemented our coverage of these struggles and our political program with discussions of theory and strategy, especially using our platform to put forward key panels and debates. The Democratic party and its agents are a strategic dead-end: to successfully fight against all oppression, it is essential that the working class emerge as a key actor, using their strategic position to strike at the heart of capitalist production. It is with that perspective that we spoke with Bessemer Amazon worker and Black Lives Matter activist Frances Wallace and author and intellectual Robin D. G. Kelly to discuss conclusions from the struggle to unionize Amazon and place it in the larger context of southern labor and Black struggle. We also held a panel and book launch event to discuss Hegemony and Class Struggle: Trotsky, Gramsci, and Marxism with the author Juan Dal Maso and Marxist academics like Warren Montag to discuss working class hegemony.

True to our internationalist perspective, we have tirelessly brought news and socialist analysis of class struggle unfolding around the world. As part of the La Izquierda Diario network, we collaborated with our comrades across Latin America and Europe to highlight key struggles and movements in their countries and beyond. From Myanmar to South Africa, our pages showed the struggles of a combative, international working class, fighting against oppression and injustice. Along with the anti-racist, anticapitalist, socialist youth from across our network, we wrote and published our program to fight climate change. Finally, as a part of the Trotskyist Fraction – Fourth International, we published a manifesto this year that put forward our fight for an international of socialist revolution.

As we look ahead, we at Left Voice have set ourselves even more ambitious goals to help us professionalize our ranks further and grow our reach. Against the hegemonic influence of the capitalist press, we want to reach millions with an uncompromising anticapitalist, independent, internationalist and socialist point of view in a world in crisis. We’ve been able to make this leap so far because of all the support from our readers, friends, and supporters like you, who’ve been fighting with us in the streets and collaborating online and through social media. To grow further and achieve the goals we’ve set for ourselves, we need your help!

Left Voice is an independent, volunteer-run media that is sustained by membership dues and donations from readers and supporters like you. For this year-end fundraiser, we’ve set ourselves a modest goal of $5,000. These funds will go directly towards the development of Left Voice in the near future, including paying for a more efficient website, producing multimedia content, travel expenses to cover ongoing strikes, and more. Whether $5 or $50, we hope that you can pitch in whatever you can to help us reach these new milestones in our fight for socialism.