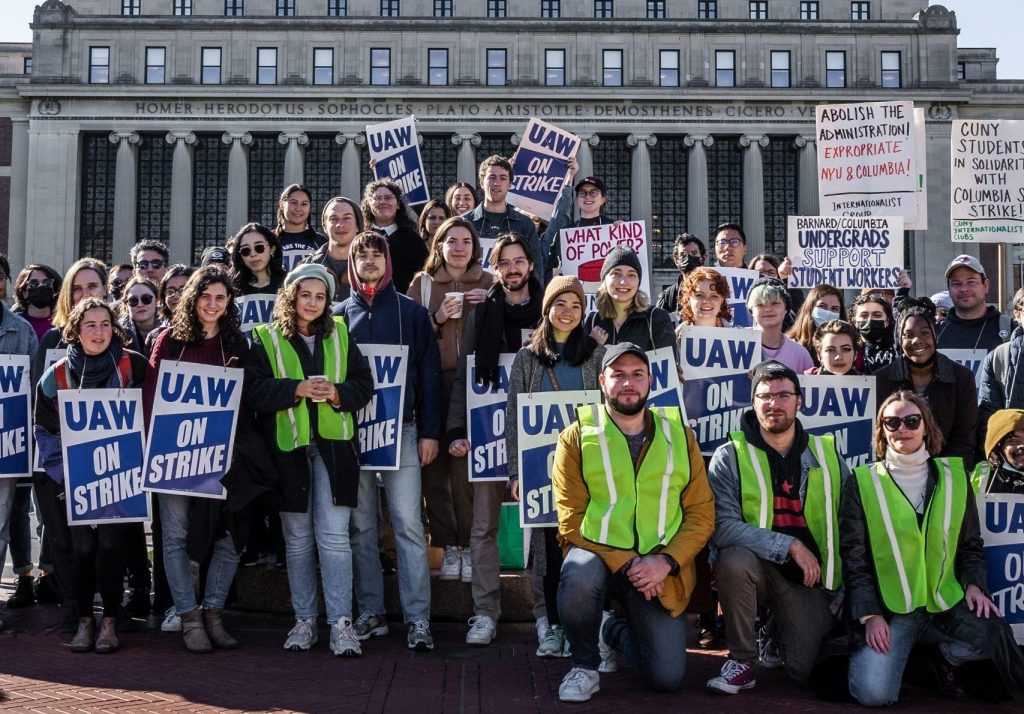 In the late hours of January 6, after more than two months on strike, the Student Workers of Columbia (SWC-UAW) reached a tentative agreement for their union’s first contract with Columbia University.

Contract wins include significant raises for workers, bringing annual compensation for those on 9-month appointments to just over $40,000 and raising the minimum wage for hourly workers from $15 to $21. SWC members also won dental insurance, childcare stipends, and an emergency healthcare fund available to all union members. They also won full recognition of all student workers as part of the bargaining unit and provisions for neutral arbitration of harassment and bullying cases. Full details have yet to be released to the public.

The strike lasted ten weeks, but this agreement is the culmination of almost ten years of organizing.

SWC’s Path to a Contract

Student workers at Columbia first began organizing in 2013. At that time, the National Labor Relations Board (NLRB) did not recognize graduate workers at private universities’ right to unionize, although it had done so for a brief period between 2000 and 2004. The founding members of SWC, then known as Graduate Workers of Columbia (GWC), spent the next three years fighting to change that policy.

In 2016, GWC won union recognition from the NLRB in a decision that paved the way for student workers at every other private university in the United States. However, Columbia refused to come to the bargaining table, leading to the union’s first strike in 2018. Columbia still only agreed to bargain after the UAW bureaucrats sold out the student workers by making a back-room deal on a bargaining framework that would prohibit the union from striking again for another 17 months. Unsurprisingly, with the union’s most powerful tool taken away, Columbia continued to stall.

One unusual aspect of graduate worker organizing is that unlike at other kinds of workplaces, nearly every employee is on a fixed-term contract with limited possibility for renewal, no matter how long it takes them to finish their degree. One purpose of Columbia’s stalling was to wait-out the most dedicated and knowledgeable organizers.

But it didn’t work. When the no-strike pledge expired in March of 2021, the union went on strike again almost immediately. This strike resulted in a tentative agreement, endorsed by 7 out of the 10 members of the bargaining committee, that sold out nearly all of the union’s demands. This agreement was met with widespread criticism from the rank-and-file, and union members organizing as Columbia Academic Workers for a Democratic Union (C-AWDU), including the three bargaining committee members who voted against endorsing the agreement, led a successful Vote No campaign. The Student Workers of Columbia became the first graduate student union to ever reject a proposed contract.

After the agreement was voted down, the entire bargaining committee resigned and elections for a new committee were called. Organizers held open meetings for anyone who wanted to contribute to drafting new bylaws for the union. The new committee and bylaws were ratified in July of 2021.

In contrast to their predecessors, the new bargaining committee agreed on a framework of open bargaining, which means all strategy meetings, drafting sessions for proposals, and bargaining sessions were open to all union members, and in some cases the general public. Open bargaining is not just important for workers’ democracy; it holds all parties to a high level of accountability to the rank and file.

In this, the proof is in the pudding: the new tentative agreement, reached through open bargaining and a more militant strike, is much stronger than the one voted down in April. As just one example, the minimum wage for hourly workers under this agreement will be $21. Under the previous agreement, it was only $17. But make no mistake— this agreement was hard-won.

Before the 2021-2022 school year began, Columbia University announced “changes to the pay dispersal schedule” for student workers’ pay. Typically, students “on appointment” (that is, non-hourly workers) receive some of their pay as a lump sum at the beginning of the semester and some on a biweekly basis. The lump sum, known as “stipend” pay, is considered student support, not pay for one’s labor. Under the new rules, students would receive only some of their stipend at the beginning of the semester. This was an intentional move to undermine the workers’ power by keeping the money — and therefore the power — in Columbia’s hands for as long as possible. In response to this and Columbia’s attempt to ban open bargaining, the union held a strike authorization vote and set a strike deadline for November 3.

From the very beginning of the strike, hundreds of undergraduates were ready to fight alongside the student workers, including shutting down one session of President Lee Bollinger’s course on “Freedom of Speech and Press.” Undergraduates also organized fundraisers and used their meal plans to sneak food out of the cafeteria to give to the striking workers — until the university got wise and tightened cafeteria security.

But the tide turned in early December, when the university threatened to permanently replace all student workers who failed to return to work by December 10. That happened on a Thursday. On the following Monday, dozens of faculty walked out at noon to join the picket line and hold a rally in solidarity. Two days later, the center of campus was deserted as faculty canceled and students skipped classes in solidarity and unions from across New York City — including the Teamsters, the NY News Guild, the Amazon Labor Union, and academic workers from CUNY, NYU, and The New School — helped SWC shut down at least six entrances to campus.

Columbia tried to smear the picketers with accusations of violence, but countless students, faculty, reporters, politicians, and other attendees attested that this was a bald-faced lie. As Mike Pappas wrote, calling the cops on your own students and denying them healthcare and a living wage is the real violence. And when department chairs began circulating calls for scabs, three unions plus nearly 800 individual members of the New York academic community signed a pledge refusing to replace any striking worker. The faculty of Columbia’s Middle Eastern, South Asian, and African Studies Department announced they would refuse to comply with the university’s order to replace their graduate students with scabs.

This struggle should be seen as an inspiration to other higher education workers and other unions across sectors, as an example of what can happen when you build power from the ground up, with open and democratic union practices, willingness to use the power of a strike and stand strong against threats from the bosses, and solidarity.
Academic workers at other universities can and should learn from and build upon SWC’s example. What might have happened if faculty were more mobilized from the beginning? What might have happened if other unions at Columbia joined the strike? What might have happened if the union had been able to truly block all of the entrances to campus and fully shut down the school? We can answer all of these questions and more in the years to come.