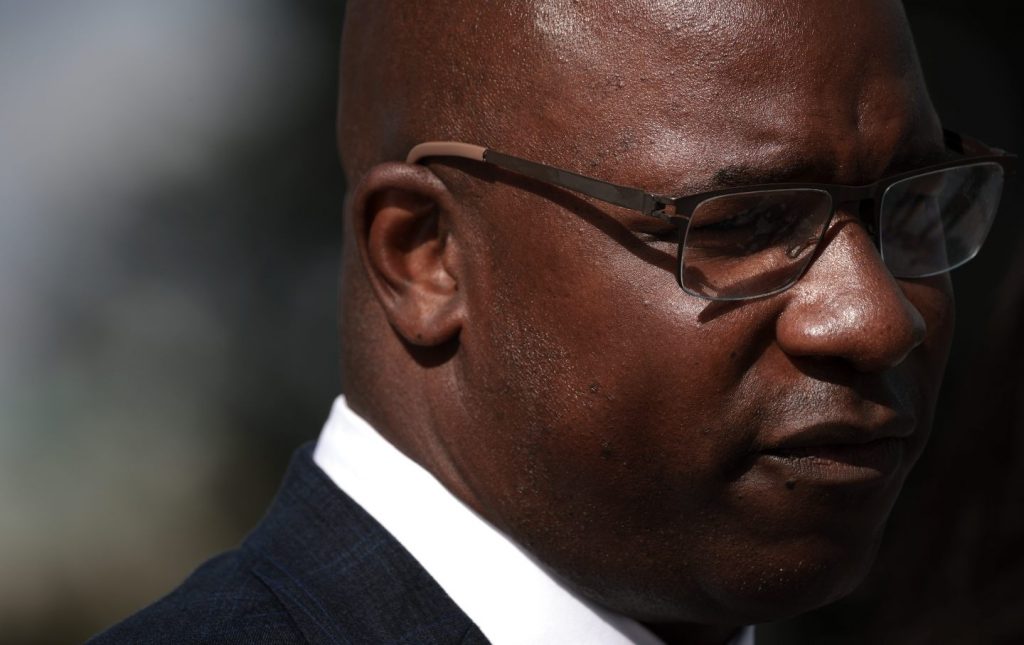 In recent years, the Democratic Socialists of America (DSA) has seemingly made inroads in the Democratic party. Among the six DSA-endorsed candidates who have won seats in Congress is Representative Jamaal Bowman, a former educator who beat a 16-term incumbent in New York City last year. But less than a year into his tenure, several DSA chapters are calling for his expulsion over his repeated support for Israel. Bowman’s actions show the futility of working within an imperialist, capitalist party, which can never be used for anti-imperialist, socialist aims.

During his campaign, Bowman painted himself as more progressive on Palestine than Rep. Eliot Engel, his notoriously hawkish predecessor, trying to stoke enthusiasm from young people increasingly horrified by Israeli brutality. However in his ten months in Congress, Bowman has repeatedly shown that he is firmly on the side of the brutal, imperialist oppression of Palestinians.

At the end of July — two days before speaking at the DSA convention kickoff — Bowman voted for $3.3 billion in military aid to Israel. In September, he voted to provide $1 billion in funding for the Iron Dome missile system. Both measures came mere months after the Israeli offensive on Palestine which left over 250 people dead — 66 of them children — and over 600 injured. This brutal violence is made possible by the U.S. funding that Bowman has repeatedly supported.

Most recently, Bowman was part of a U.S. Congressional delegation to Israel, sponsored by the liberal Zionist organization J Street. The group met with Israeli Prime Minister Naftali Bennett and Foreign Minister Yair Lapid. Both Bennett and Lapid are avid proponents of annexation of the Palestinian territories — the latter has claimed that he operates from the principle of, “maximum Jews on maximum land with maximum security and with minimum Palestinians.” The new regime, which took over from Benjamin Netanyahu in June, has continued the Zionist country’s decades-long policy of repression, occupation, and apartheid, including demolishing Palestinian homes and silencing organizations that shed light on the plight of Palestinians.

After Bowman and the Democrats’ visit, Lapid tweeted that he was, “grateful for the overwhelming bipartisan [U.S.] support for Israel,” and commitment to the country’s security, notably, the Iron Dome missile defense system.

Following the trip, the Madison, Wisconsin DSA chapter posted an open letter to the organization’s National Political Committee (NPC) calling for Bowman’s expulsion, claiming that he has “used his office and public stature to work against the political positions of the [DSA] and the principles of socialist internationalism.” In addition to his unwavering support for Israel, the chapter cites his recent laudatory comments towards war criminal Colin Powell whom he called “an inspiration.”

Other chapters have since followed suit: the Buffalo, Orlando, Los Vegas, and Pittsburgh chapters are likewise calling for him to be ousted, and the DSA’s BDS and Palestine Solidarity Working Group is demanding that the NPC, “hold Bowman accountable to DSA’s principles, policies, and resolutions, including on Palestine and BDS.”

Other members have stopped short of calling for expulsion. In a recent statement titled, “For Unity, not Unanimity: Palestine, Jamaal Bowman, and DSA,” the signatories claim that ousting the congressman and retracting “would be a Pyrrhic victory” and “performative act.”

The current situation has put the DSA in a bind; far from being a specific problem with Jamaal Bowman, it puts into clear view the deep contradictions in the organization’s strategy. On the one hand, the DSA endorsed him, and he even spoke at its convention last summer. Like his fellow Squad members Alexandria Ocasio-Cortez (AOC), Ilhan Omar, Cori Bush, Ayanna Pressley, and Rashida Tlaib, Jamaal Bowman is often held up as an example of the promise of working within the Democrats, and the success of pushing the party leftward. Indeed, this approach has all but replaced any strategy for breaking with the Democrats at all.

On the other hand, the congressman’s behavior directly violates the organization’s professed principles and policies. Earlier this year, he ensured the passage of a bill to increase Capitol police funding by voting “Present.” The DSA turned a blind eye, despite its commitment to abolition. And although the DSA officially supports the Boycott, Divestment, and Sanctions (BDS) movement, Bowman opposes it, and has only stated that he supports Americans’ overall right to protest. In a recent call with the NPC, he continued to oppose the movement.

Of course, support for imperialist politicians isn’t new for the DSA. The organization threw its weight behind both of Bernie Sanders’s presidential campaigns, despite the Vermont senator’s decades-long support for military interventions and sanctions, and his repeated votes in favor of more funding for the Israeli military. Other endorsees, too, like AOC, have supported imperialism both in the Middle East and in Venezuela, and the DSA turned a blind eye each time. In fact, in a blatant rejection of international solidarity, the organization invited Brazil’s former president Dilma Rousseff to speak at its convention despite her countless betrayals of the working class during her time in office.

It’s clear that someone with Bowman’s — and the Squad’s — imperialist views, and positions on Israel doesn’t belong in a socialist organization. But in the face of these contradictions, we must be clear: Jamaal Bowman cannot meaningfully be held accountable, because the notion of an “accountable Democrat” is an illusion, and the strategy of achieving socialist aims within a capitalist party will always fail. The Democratic Party is a capitalist, imperialist party, and as such it will always be firmly on the side of imperialism — including when it comes to Israeli annexation and oppression in Palestine. Viewed in this light, Bowman’s actions are altogether not that surprising.

Democratic Party politicians are only accountable to the ruling class. They are not accountable to the working class even if the latter voted for them. As we have written previously, even self-proclaimed “socialist” politicians who enter Congress as Democrats have already abandoned the principles of class independence and international solidarity. When in Congress, they wind up further compromising on their remaining principles in order to, for example, gain committee positions, and solidify their future in the Democratic Party. When running for re-election or other prestigious positions in the bourgeois state, they are beholden to the ruling class who contributes to their expensive campaigns.

The solution to Jamaal Bowman’s betrayal — and that of other DSA-endorsed politicians who’ve acted in direct contradiction to the organization’s principles — is not to expend more energy on crafting mechanisms of accountability. No amount of organizational discussions around censure and expulsion will meaningfully bring these politicians to account or make the strategy of working within the Democratic party any less bankrupt.

Rather, socialist politicians need to be elected on the basis of a socialist program in a working-class party — a party independent of all capitalist, imperialist parties.

The aforementioned statement against expelling Bowman claims that “focus on an internal matter at the expense of external organizing […] will make our members and the public question who DSA is struggling against: the ruling class or itself.” Bowman is a sitting member of the Democratic Party, a party of the ruling class. Perhaps the DSA should be struggling more against him.