Despite Amazon’s union busting, workers at three warehouses are fighting to unionize. If successful, they could help create fighting forces for the working class. 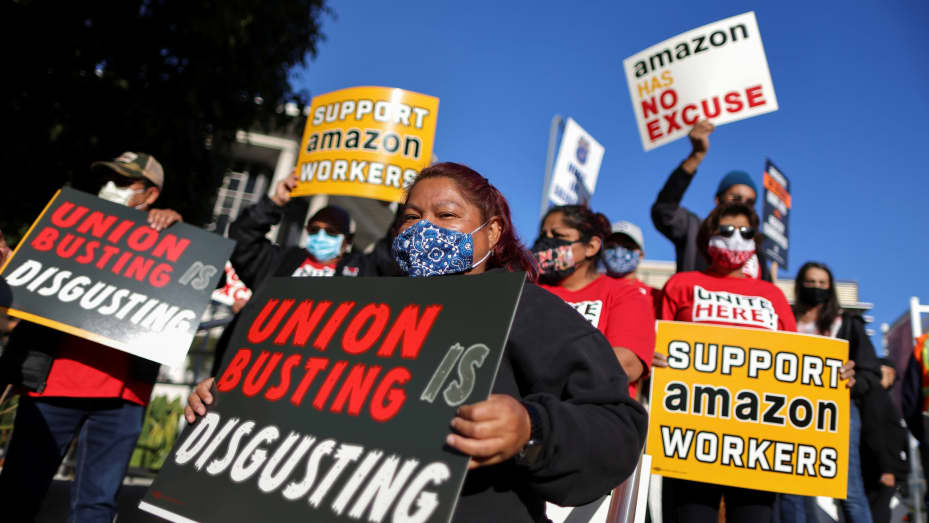 #Striketober may be over, but the struggles to organize at Amazon have not been not defeated — in fact, they’re spreading. Three Amazon locations are currently attempting to unionize: two in Staten Island, and one in Bessemer, Alabama.

Ballots went out yesterday to over 6,100 workers at Amazon’s Bessemer warehouse for a mail-in election with a March 25 deadline. You may remember the Bessemer unionization effort from March of 2021. Last year, that effort failed in no small part due to Amazon’s union-busting tactics including anti-union text messages and bribes. While forcing their workers to attend mandatory anti-union lectures, they pressured the city into changing the timing of a traffic light in order to disrupt organizing efforts, and even strong-armed the USPS into installing a mailbox that the National Labor Relations Board (NLRB) had explicitly barred, in an Amazon-branded ballot-collecting tent. As a result, the NLRB determined that Amazon used union-busting tactics, and ordered a new union vote.

In Staten Island, New York, two Amazon warehouses are now seeking to unionize. JFK8 workers attempted to unionize last year but withdrew their petition in November, only to refile in December. As the NLRB was forced to admit, the workers have enough signatures for a hearing to be held in mid-February. This meeting will decide how many workers are eligible to vote, as well as the timing of the vote.

Within the past week, workers at the Staten Island warehouse LDJ5 submitted petitions to the NLRB to request a union vote. These two New York City warehouses are not unionizing through an existing union, but filing under a new one, called Amazon Labor Union. Among the leaders of the effort is Chris Smalls, who was fired for protesting Amazon’s lack of safety measures at the height of the pandemic.

Amazon is the country’s second-largest private employer after Walmart, and is notorious for its horrendous working conditions. In the words of Francis Wallace, a worker interviewed by Left Voice in Bessemer last year: “It is extremely tiring, I will agree with that. Of course, there’s bending and standing up all the time. There’s a ladder inside my area, ’cause I do stowing. I’m climbing up and down the ladder, bending up and down, picking up the boxes. When you do that for 10 hours straight and you only have three, maybe 15 minute breaks, it gets really tiring.” Another worker reported extremely hot warehouses, without ventilation.

Multiple workers have died on the job at Amazon warehouses over the past year. Six died during a tornado that struck the midwest in December, and two died at the Bessemer location. One worker suffered a stroke after being told by management that he couldn’t leave work. Hours later, another worker died. “There is no shutdown. There is no moment of silence. There is no time to sit and have a prayer,” Perry Connelly explained. “A couple of people that worked directly with him were badly shaken up and wanted to go home and were not allowed to go home.”

These three unionization efforts come on the heels of the important strikes in October and November, popularly known as #Striketober, with stoppages at large employers like Kellogg, John Deere, Columbia University, and hundreds of smaller workplaces. Only a few miles from Bessemer, Alabama miners at Warrior Met Coal have been on strike for nearly ten months. Recently, dozens of Starbucks stores have also filed for union elections. This all comes amidst the so-called “Great Resignation,” with workers quitting their jobs in droves. The pandemic has shifted the spotlight to the working class.

At Amazon, the discontent among the working class is also expressing itself in more direct ways, through mobilization and action. In December, workers at Amazon warehouses in Chicago walked off the job, demanding a wage increase and better working conditions, organized by Amazonians United, a labor network that organizes at Amazon throughout the country.

A success at Amazon may unleash a wave of unionization filings, just as the first successful Starbucks union in Buffalo has inspired similar drives at dozens of other locations.

As expected, Amazon is again engaging in union busting, revealing just how frightened they are of the growing awareness of their workers’ collective power. Anti-union signs, as well as paid union busters, were spotted at the JFK8 warehouse in Staten Island. Managers have held mandatory anti-union meetings. Amazon has brought in union buster David Acosta — a self-described “Union Avoidance Consultant,” who earned over $400,000 in 2017 — who has reportedly illegally threatened workers against voting to unionize. Employee Daequan Smith was illegally fired for trying to unionize. This is nothing new for Amazon, as previous unionization attempts show.

Amazon is hell bent on making sure no union emerges at their workplaces and they are well aware of the domino effect that one union may create. That is why they will throw everything they have at defeating these efforts.

As the first Bessemer Amazon unionization drive showed, to win a union, it is not enough to rely on Democratic Party politicians and celebrity endorsements. Much criticism has been leveled at the RWDSU for their lack of worker participation, from our own pages as well as from authors like Jane Mcalevey. The Staten Island warehouses must also learn from this.

There is no substitute for the rank and file. If these unions have any chance of winning, they must be organized by and for workers. And these unions should not only be for the purpose of winning a union, but to create a fighting force for the working class. And as the Great Resignation highlights, it’s not enough to be unionized; after all teachers and healthcare workers who are struggling under horrendous work conditions are leaving in droves. Workers must reject top down business unionism and organize fighting unions, organized by and for the rank and file — a union is not an end in itself, but a step in building a fighting working class.